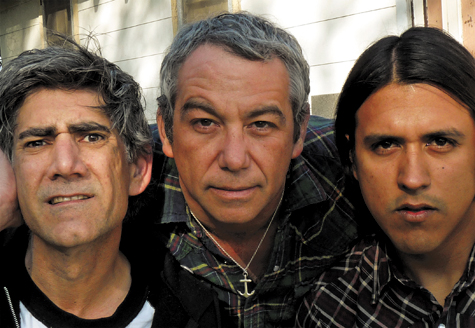 Mike Watt knows more about your scene than you do.

No offense, that’s just the way it is. And it’s the same for folks in cities and college towns across the country. Watt has spent more than 25 years “touring econo”––Watt parlance for punk-rock touring in a drive-it-yourself van, no roadies or hangers-on needed. And that time taught him a lot about America’s underground music scene. Chatting about his years on the road, Watt name-drops music venues shuttered two decades ago, favorite restaurants in Bumfuck, Kansas and nearby natural wonders from almost anywhere he’s rocked his “thud staff” (Watt parlance for his bass).

When it comes to Salt Lake City and Utah, Watt has plenty of material for his memory bank, and for his ongoing tour diaries kept online at Mike Watt’s Hoot Page (hootpage.com).

He played long-gone downtown storefronts with The Minutemen, his childhood trio formed with best friend D. Boon (not to mention true West Coast punk legends). He played Speedway Cafe and The Saltair leading fIREHOSE from the indie ranks to a major label. And as a solo act, J Mascis sidekick and member of oddball jam-banders Banyan and the resurrected Stooges, he’s played everywhere from the Zephyr Club to Bar Deluxe, Liquid Joe’s to the ridiculous sub-zero “Bud World” outside at the Gallivan Center during the 2002 Winter Olympics.

“Because of where it is, Salt Lake City has always been on the map for us,” Watt said in an interview shortly before launching his Prac’n the 3rd Opera Tour, stopping in Salt Lake City May 19. “If you’re coming out of the Northwest, there’s not a lot on the way to Denver. That’s why Boise gets a lot of gigs. And Salt Lake City goes WAY back before Boise. Black Flag was always playing there. And fuck, I’ve always said, if there’s a scene, play it! We go way back playing there. I always dug it.”

“There’s all this natural beauty in Utah, like Zion and Bryce Canyon. People have these weird concepts, like everybody in Utah is crazy. They have weird notions. I think it’s TV-fed, not personal experience. Every place has nuts—I don’t think Utah has all of them.”

Watt chatted with SLUG by phone from his home in San Pedro, Calif., and it happened to be D. Boon’s birthday—the former Minutemen  guitarist/singer would have been 51. Watt’s best friend and bandmate was killed in December 1985 in a van accident, and everything Watt’s done since, musically speaking, has been dedicated to Boon.

Watt started talking about his friend before a question was asked.

Watt: This morning I went pedaling by the apartment where D. Boon lived when we started The Minutemen. I went and took pictures of that house again. I like to think of him on his birthday more than on the day he got killed. That’s a heavier day. I’m feeling weird now, but part of that is, in 16 days I’ve got tour.

SLUG: Is it harder to motivate to tour as you get older?
Watt: I’ve always had a little anxiety. So many things can go wrong on a tour. The main thing is, I want to get Tom [Watson, guitar] and Raul [Morales, drums] home safe. Once you get into the tour and it becomes day-to-day, it’s not as bad. But there’s some apprehension at first, and I’ve been doing this many, many years.

SLUG: Has touring changed a lot for you through the years?
Watt: It’s every day. The way I tour is, it’s no days off. If you ain’t playin’, you’re payin’. And as long as you’re out there, you might as well get as many people to see you play as you can. There are a lot of things you can say about the U.S.—it’s fucking big! So we try to play as many places as we can. What I’ve learned from touring is, in the spring, you want to get out of the south before it gets too hot. In the fall, it’s the opposite. You want to get out of the north before it gets too cold. The vaudeville guys probably figured this stuff out years ago. I remember the first Minutemen tour on our own in ‘84, we went in the summer. It was like a slaughter. We were so sweaty. We cut our heads bald––we thought that would help––and it did a little bit. We learned by doing.

SLUG: How was being on the road with The Stooges the past few years?
Watt: You know, because of The Stooges, this is the first U.S. Watt tour in five years! I spent five-and-a-half years with The Stooges. I got to be in the Stooges’ classroom. I can’t imagine the punk scene would have existed without The Stooges. My ears would grow the size of elephants, trying to soak up all they had to talk about. I know they started punk and shit, but they’re from the ‘60s! They aren’t from our scene; our scene came from them. It was very interesting to be around those guys. I would have never imagined something like that coming along and happening. I never will forget it. I think the experience will go in all my music. And I always figured I owed those cats my best notes.

SLUG: How did that gig come together?
Watt: Well, there was a lot of circumstances that came together. I got sick and almost died in 2000. They put tubes in me and shit and I had to stop playing bass for the first time since I was 13. They finally pulled the tubes out and I could play again, but I couldn’t play! My fingers were all atrophied and shit.  I hadn’t done it for months. I freaked out, so I started playing Stooges song––there aren’t a lot of chord changes, it’s more about feel––to get strong. “Little Doll” over and over. I decided to put together some copy bands to get strong. So I made a band with Peter [DiStefano] and Perk [Stephen Perkins] from Porno on the West Coast, and a band with J Mascis and Murph from Dinosaur [Jr.] on the East Coast to do it. We did Stooges songs, then we’d jam on kind of a [John] Coltrane trip and just go off. Stooges songs are good for that. So I ended up with four or five different bands doing Stooges songs! J decided to do a solo album and created The Fog to tour. So J had me along to play and sing some of the Stooges songs we’d do in the shows. Then J brought [Stooges’ guitarist] Ron Asheton on tour, and we’d do about nine Stooges songs. Soon enough, we had [drummer]Scott Asheton with us and we were touring in Europe as Asheton, Asheton, Mascis and Watt. Iggy heard the Ashetons were playing together again, and The Stooges were back together a year later. Then one day Iggy called me up and said, “Ron says you’re the man” [original Stooges bassist Dave Alexander died in 1975].

SLUG: How was touring with Iggy Pop and those guys different than a Watt tour?
Watt: Well, them being older gentlemen, it was maybe three gigs a week. So we had a lot of days off. They need time to recover. For one thing, Ig, that guy! I try to play as hard as that guy, and he’s 11 years older. Fuck! He’s got a hurt knee and a hurt hip, but he never plays a gig halfway. As a result, we need days off. And that’s good for Watt to go check out and learn. I got to see places I’d never be if it wasn’t for the gigs.

SLUG: It seems you get out and check out the towns you’re playing, as opposed to arena rockers who only see a bus or hotel room.
Watt: Me and D. Boon found out early in touring that this was a real benefit. You’d read the interviews with the old rock and rollers and they were sick of touring and all that shit. But we found out that not only do you get to go play for people in different towns, but you get to check a bunch of new shit out! We were working people, so we didn’t have vacations. This was our opportunity to see shit, and that still hasn’t worn off all these years later. Because once you go somewhere, things change! Just because you’ve seen a place once doesn’t mean that’s the way it’s always going to be! That’s one reason I do the tour diaries. I want people to get curious to go check shit out for themselves. Part of consumer culture—to get people to buy, buy, buy—marketing people come up with “experts” to tell you what’s cool. You can learn stuff from “experts” on TV, but you can also be led around.

Check out our online exclusive review of the show here!