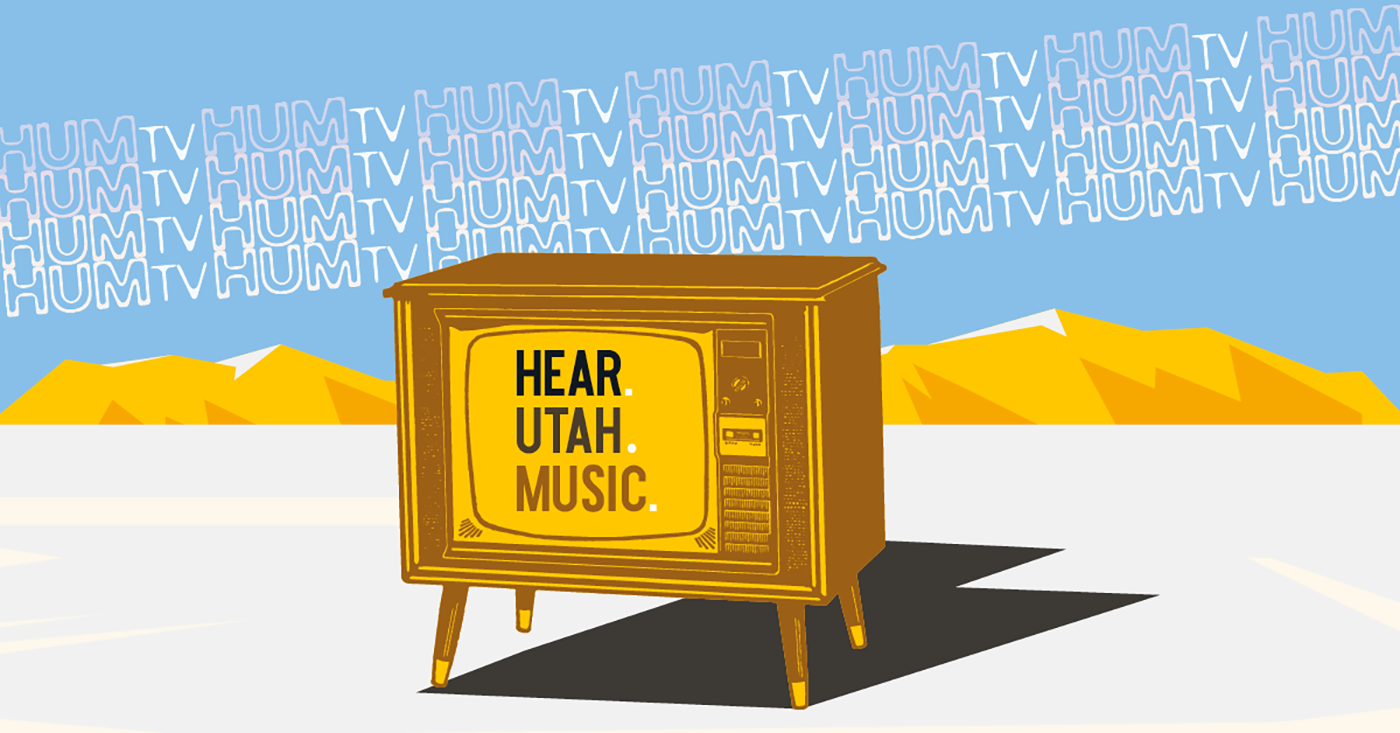 Mind your Music: Welcome to HUM-TV

What better way to welcome in new local music than presenting it to us with what we loved about old shows like those on MTV. Kurt Cobain once said, “MTV is God” or maybe you’re more of a Mr. Rogers fan. Point is, HUM-TV (a new show produced by the Salt Lake City Library), like MTV and Mr. Rogers, is gritty, fun and right next door. The electric feedback, snare drum and static enhanced introduction video coming from Salt Lake City Public Library’s new public access show reminds you of the public programming from the early ’90s spliced with music television. HUM-TV is introduced with a shot of the Salt Flats featuring a lone TV/VCR player being fed a VHS tape marked “HUM TV,” which informs us we are securely nodding to the past. Ben Swisher and Jason Rabb, who spearhead the project, discuss the library’s new local music show and why they chose the “public access–meets–MTV format.”

SLUG: So Ben, how’d you get involved with or perhaps create HUM-TV?

Swisher: Jason asked me to help with the HUM collection at the City Library a little over a year ago now. And last year that meant getting to help with summer concerts we did, and the HUM Fest. But when COVID-19 hit and closed things down in March, we had a few phone convos after our submission round in February 2020 wrapped up. During these phone calls, we tried to figure out ways the library could still support local music and facilitate performance in lieu of in-person things for the foreseeable future.

We sent each other some live streams early into quarantine that felt like they were tapping into something good and then tried to brainstorm ideas around that. And when we came across a clip of David Byrne interviewing PJ Harvey on Sessions at West 54th for PBS, and that’s the moment I think we found a format that could work. We took a lot of lessons from 12 Minutes Max migrating to a digital thing, came up with a name we liked and then reached out to guest hosts and local musicians for our first season.

Swisher: For this first season, we contacted guest hosts from City Weekly, SLUG Magazine and KRCL, and shared a list of musicians we thought would be fun for our first go at this. We also welcomed guest host input on who they’d be interested in interviewing. So they had input in a way that’s kind of similar to our jury process for our HUM submission rounds.

It was also important to us that we’re amplifying voices in the community that may be marginalized, underrepresented or don’t have the resources that a lot of other music makers might have. So we felt like it was important to offer loaner equipment for those who don’t have access to all of the video and audio recording gear.

SLUG: What public programming specifically jumps out to both of you, as a reference?

Swisher: Sessions at West 54th was the jumping point, for sure. I think we also thought generally about the early weird days of MTV, or the approachable quality of something you’d come across on fuzzy homemade public access. There’s also a narrative video game I really love, called Kentucky Route Zero, that has this kind of dream world version of what art and music would look like in a fringe version of PBS. So, at least for me, all of the above swirled together.

Rabb: Because this is a library TV show set in the homes/personal spaces of artists (not made in a TV studio), we are leaning into the homemade feel of public access TV. HUM-TV is also very much inspired by SLUG Mag’s Soundwaves splicing interview footage and music together to create a meaningful spotlight for local artists.

Swisher: Having interviews with musicians right now about their work, their experiences in Utah, what music means to them it all feels like a way of tracing out and exploring what we love about music, what we miss about the way it used to be and what maybe we can take with us as we hopefully emerge into something newer and better down the road.

Rabb: I’m hoping that we can capture the feeling of “public,” from both public TV and the SLCPL. They are both spaces where everyone is welcome, where everyone has free access to information, to arts, culture … and they are both commercial free spaces, places free of people trying to sell you stuff. We’re also hoping to take that library spirit (and maybe public TV, too?) of digging into things, learning more about the music and artists in our community. But hey, we’re not trying to uncover corporate malfeasance her, this is fun stuff, so hopefully we can carry some of that playful energy and sassy attitude of early MTV into this program.

SLUG: Is the library creating any other music spaces for local artists to perform?

Swisher: The library moved things around to make 12 Minutes Max a digital program before HUM-TV, which also often features musicians and sound art. So that’s a type of “space.” But anything else mostly depends on the needs that come up in the community, which are difficult to entirely predict.

Mainly right now, we’re thinking about digital barriers that might exist among musicians, and potentially working to maybe have kits that musicians can use to record performances or make barebones recordings while folks aren’t able to use resources like the recording studio in our Creative Lab spaces.

SLUG: Will there be live musical collaborations?

I think if local musicians have ways they want the library to assist them in making new connections, or have ideas about how we could play a role in that, we’re always happy to help wherever we meaningfully can.

SLUG: What are your plans for expanding the program through future seasons?

Rabb: This time around we wanted to let guest hosts mostly decide what they wanted to try out, and felt the most comfortable doing. People who excel at exploring the stories of local music probably don’t need a lot of guidance from us. But we care about engagement. And I think the more we get to do things like this, the more we’ll learn what kind of ways we can experiment and remain playful.

These HUM-TV episodes will be the start of a new video collection on the Library’s HUM site. We already have a strong (and growing) music collection, a budding poster collection … and we’re excited to expand HUM with this new collection of TV shows hopefully with many seasons to come.

I’d also like, somewhere down the road, to be able to provide a physical space to record these shows for those artists who just don’t have the space or tools to record a live performance.

SLUG: Any final thoughts you’d like to send out to SLUG readers?

Swisher: Mostly just reminding everyone that musicians, like lots of folks right now, are still hurting financially. Any way that we can buy music to directly support musicians, instead of exclusively streaming music, which gives very little revenue to artists per play, can make a world of difference.

Also! We do HUM submission rounds for local music twice a year in February and August. So if you’ve always wanted to submit something, or know of someone that you’d like to see in our collection or in future programs, help us spread the word about that.

There’s a lot that is dark about this year, none of which should be overlooked. But that comes with the opportunity to make something better in this moment. And the vitality of local music can play a vital role in that.

And there you have it. A little nostalgia to bring in the new. You now have the means and ways to manage the indoors with some new flair and support Salt Lakes City’s local music scene. With HUM-TV, SLCPL has created a show that’s unique, entertaining and just a few clicks away. HUM-TV is released every Wednesday in October, so tune/stream in for the full experience and enjoy our local music from the comfort of being wherever you are.