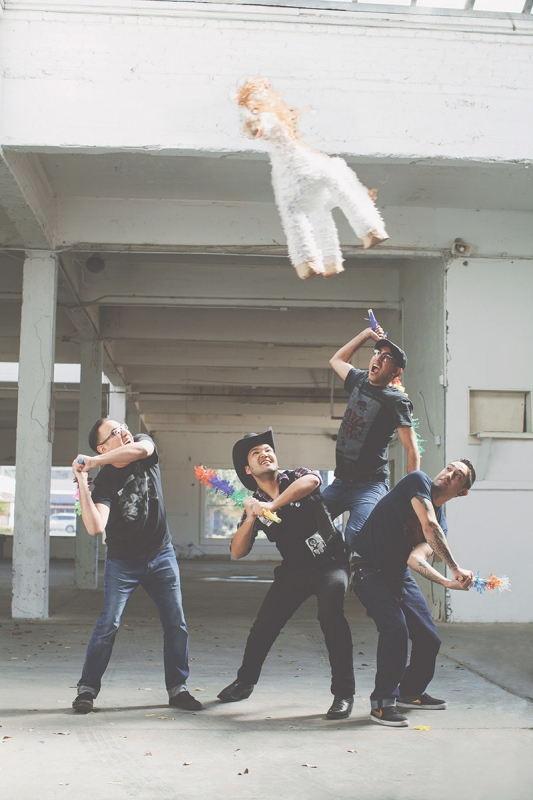 Mojado Punk’s Not Dead: An Interview with Piñata Protest

If your ideal version of a raucous punk rock performance doesn’t involve an accordion and at least one cowboy hat, you clearly aren’t aware of Piñata Protest. The quartet have been making a name for themselves by fusing traditional Mexican music with good ol’ fashioned punk rock. Their recently released EP, El Valiente, begins by introducing the band as “los mas chingones de San Antonio” before exploding into a bilingual punk rock party that your abuela will enjoy just as much as your mohawked homies. The band adds their own unique spin on standards such as “Volver, Volver” and “La Cucaracha,” and explosive originals such as “Vatos Perron” and “Life on the Border” will spin you around so fast, you’ll probably want to listen to the EP a few times before returning to reality. SLUG recently conducted an email interview with vocalist, accordionist and Piñata Protest mastermind Alvaro Del Norte to find out about the band’s unique take on punk rock.

SLUG: Could you tell me how you first became interested in punk rock?
Del Norte: I grew up in a very conservative and quiet family, and listening to rock n’ roll was looked down upon. I mostly grew up listening to Top 40 R&B, pop and all the Mexican music my parents blasted at home and in the car. When I was in the ninth grade, I went to a party and heard The Clash, Ramones, Green Day and Dead Kennedys for the very first time—it was a lucid trip, both mentally and physically. My life changed at that moment, and I knew I wanted to learn to play the electric guitar and listen to more of this mind-blowing music. Punk rock changed my life.

SLUG: How do you think punk rock speaks to your experience growing up Mexican in Texas?
Del Norte: I don’t think punk rock spoke anything about my culture or geographic background. If anything, punk rock was a way to rebel against my own heritage. None of that mattered though—I listened to punk rock for the same reason I listened to Philip Glass or Jaco Pastorious, because I simply loved it, and it moved me. Punk rock (and music in general) is universal. It speaks to everyone.

SLUG: Piñata Protest’s music is irreverent and fun, but some of the songs have lyrics that also address weighty social issues. How do you balance the rowdiness of your music with the message you’re trying to deliver?
Del Norte: Sometimes, a nice, quick statement about what a song is about sets its serious tone. In the end, though, we love making the crowd dance and aren’t out to preach. Sure, we’d like to change the world for the better, but if that was our primary goal, we’d be activists or go into government. Music can be a great catalyst for change … but it’s just not a very practical form of serious activism. Lately, though, with the increased attention the band has been getting, it’s actually caused me to consider being more vocal about certain issues.

SLUG: Your accordion is the most striking element of Piñata Protest’s sound, and what connects it so closely with norteño/conjunto/tejano music. How did you come up with the idea of fusing the accordion used in traditional Mexican music with punk rock?
Del Norte: I used to play bass in a traditional tejano/conjunto band, which was composed of members of a defunct punk band. We liked to fool around during rehearsals by speeding up the tempos and adding distortion to the guitar. It sounded wicked. That was the initial inspiration.

SLUG: You describe your music as “mojado punk.” “Mojado” is typically used as a derogatory term against Mexicans—why did you decide to use that descriptor?
Del Norte: I’ve never thought the phrase “mojado” to be derogatory. To me, the word is synonymous with the word “immigrant,” but specifically one from Mexico or Latina America who has come to the United States for work or to provide a better life for themselves or their family. Throughout the course of human history, millions of people from all over the world have migrated for those same reasons. I don’t see anything derogatory about that.

It’s true that some, if not most, people may read it in a negative sense, and I feel that using that word to describe ourselves is a way of reclaiming the word in a similar way the queer movement reclaimed their word.

When I was eight or so, my family lived in Topeka, Kansas. I remember my father installing new window tint onto the family car. On the rear window tint, he cut out the word “mojado.” I’m not exactly sure why my dad did that, but it seemed very rebellious. I liked that.

SLUG: Are you ever worried that your music will be seen as stereotypical or that it perpetuates certain ideas about Latinos?
Del Norte: *puts down taco* No … not really. We’re as much Latino as we are full-fledged, consumer-cultured, true-blue, democracy-loving Americans. We’re more American than apple pie.

Piñata Protest will perform at Burt’s Tiki Lounge on Sept. 21, and Del Norte says they’re excited to return for an intimate show. Get there early, and stay late for punk rock legends Agent Orange and Guttermouth.