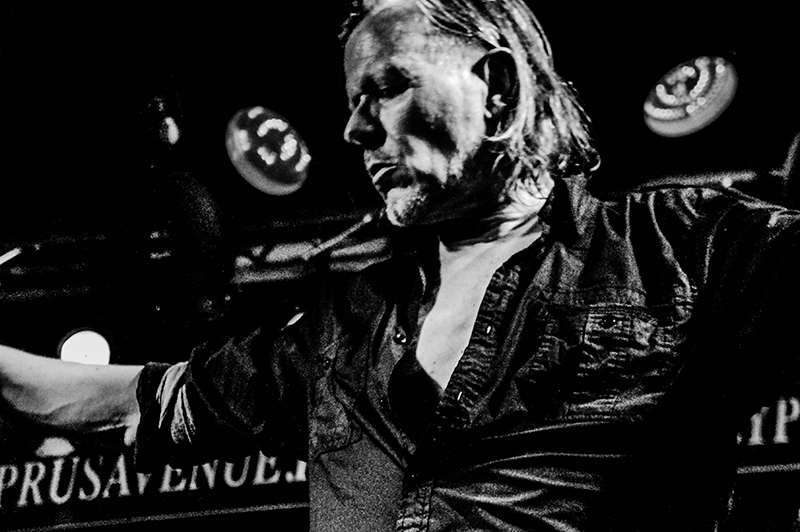 Momentum Of Sound: An Interview with Michael Gira of Swans

I recently described the sound of a Swans record to a friend as being between that of a great mythological beast crashing toward the ocean while the sun explodes, and the feeling of absolute awe—articulated through volume. The experience of listening to their music is a potentially immersive one for the listener, where it is absolutely possible to become lost within an expanding perception of time and one’s surroundings. To Be Kind, Swans’ third album since regrouping in 2010, came out May 12. Some of the most immediately noticeable musical traits on To Be Kind, setting the songs apart from those on previous records, is the approach to groove, which Swans visionary and creator Michael Gira says is “the trajectory of where I wanted things to go after The Seer. The music I love to listen to, for instance, is Nina Simone, James Brown, Howlin’ Wolf, Fela Kuti, really groove-oriented. … I thought that I just wanted to go for that feel as the basis of things, so we’re pretty hard on that.”
Fela Kuti’s music is actually a good comparison, in spirit, to that of Swans. In many of his songs, he would lay out a long groove, before leading into the vocal section, then go back into the groove and follow it, allowing it to grow. It’s beautiful. Relatedly, the nature of Swans’ music is very organic and constantly evolving. The potential for improvisation within the songs seems to be there, but not in the traditional sense—“It’s not the kind of improvisation where people take solos. It has more to do with finding new ways to service the momentum of the sound,” Gira says, affirming this notion. “I wanted to say groove,” he goes on to say, “but it’s more than that. … It’s not improvising like everybody’s free—it’s more like we’re serving this greater master than all of us.”
Swans is a study in dynamic and progression. Gira refers to one of To Be Kind’s many great moments: “There’s this piece on the record which, to me, was one of our finest moments and the most enthralling to perform, ‘Toussaint L’Ouverture.’ There’s a groove Chris [Pravdica, bassist] plays on it, but it’s just these swelling swarms, clouds of sound—and I’m sort of conducting the band, getting individual players to stand out, more or less. This is all about sound and really just being completely expressive in the moment with sound. It is not even tonal, in a way. It’s just these swirls of sound. It’s like going to heaven.”
With an album such as To Be Kind’s predecessor, The Seer, I’ll only listen to it in its entirety, blocking out time just for the album, as one might plan to do with a film. I was curious as to what Gira’s primary intentions tend to be in creating and listening to music—where escape and expansion are concerned.
Gira says, “I think, frankly, [with] most art that I consume—whether it’s visual or auditory, or film or something [else]—first and foremost, my primary goal is to escape and to lose myself, and then content is ancillary, but is great to experience. There’s a great quote by a great artist—Francis Bacon—who said he never finished a boring book. I think that’s a good credo by which to live. If a book is boring, why the fuck are you reading it?”
Thirteen years passed between the time Gira chose to put Swans on hiatus in 1997 and 2010, when the band released My Father Will Guide Me Up A Rope To The Sky. In that time, Gira released several albums with his band, Angels of Light, which he describes as “songs written on acoustic guitar, orchestrated with natural instruments,” he says. ”They were more art songs, but I learned a great deal from there.” Gira has shared recordings of his songs’ acoustic beginnings with fans—something he began doing while in Angels of Light. Sales of those recordings went toward financing the production of that band’s albums, which they have done for Swans’ work since reconvening.