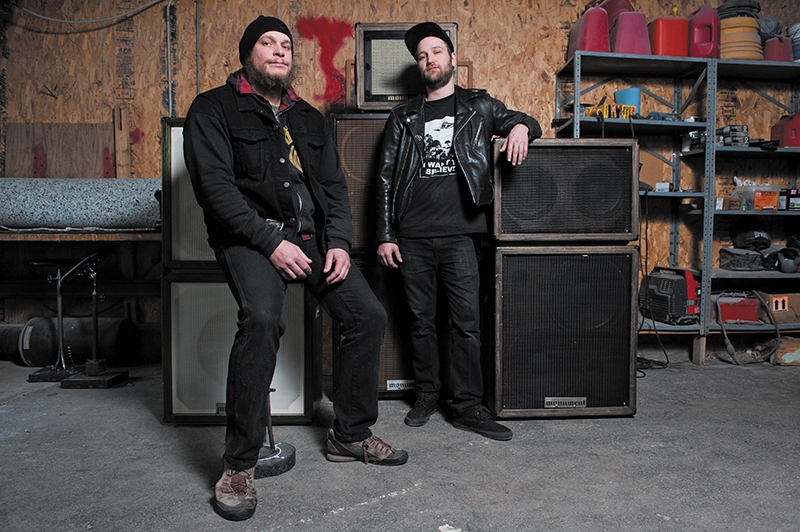 If you’ve ever gone through the process of picking out a new cab for your sound, then you know it can be a monumental pain in the ass. There’s a lot to consider. For example, the entire structure and material of the equipment influences the minutiae of details, which collectively dictate the noise it produces: resonance, bass width, frequency output, wave breakup rate, etc. And if you think hearing those differences is a difficult process, try building one from scratch—and then try making it look this easy.

Dave Jones and Max Johnson, bandmates in Oldtimer and owners of Monument Cabs, have been friends for over 15 years. They officially started their company just five years ago, but their experience with DIY craftsmanship goes further back than even their friendship. “I built my first speaker cabinet when I was 16,” says Jones. “It was a piece of crap, but it worked, and someone’s probably still using it.” Since then, Jones explains, he’s been dedicating his spare time to the construction of seriously impressive speaker cabinets.

Their partnership is wonderfully symbiotic. Johnson has experience with woodworking and develops the framing for Monument’s signature look. “I’ll build the wooden skeleton of the cabinet and then bring it to Dave,” says Johnson. “Dave has always been on the more musical side of it, so he tells me what to do.” Both owners say that they draw inspiration from other independent builders such as Sunn and the locally based Hex Cabs. “Seeing a lot of the other DIY cab companies and seeing the stuff people could do to make it look nice is really cool,” says Jones. “I thought to myself, ‘I can’t afford to buy [those cabs], but I can probably build it.’”

It’s this kind of self-sufficient attitude that makes Monument Cabs such a promising, up-and-coming local business. Jones comments that much of the work they do is purely out of personal interest and passion for finding creative alternatives to the standard-issue cabinet builds. “We check out a lot of other amps and the different ways they’re built, and just kind of go through and find the stuff that we like the sound of,” he says. “Then we try to make something that’s similar but maybe make it a little bigger to have more air inside of it for a deeper sound, or make it tighter so that it will breakup sooner. It’s definitely just trial and error and messing around, seeing what sounds good to our ear, but we have fun with it.” As the bassist for both Oldtimer and Dwellers, Jones explains that his music influences the cabs he’s going to make next. “The music that we play affects the cabs we build. In the beginning, [we built] for stuff we wanted to play with but couldn’t buy,” he says, “but it’s cool having your own gear up there.” Thus, it’s no surprise that both Oldtimer and Dwellers are known for their booming sounds. Though Dwellers comprise mixed equipment, Oldtimer are fully decked out with Monument gear. If you saw them play this past summer at CrucialFest, then you’ve seen it for yourself. “We have four 12” cabinets, two 15” cabs, two 10” cabs and full stacks behind everybody,” Jones says—each one custom-built for a specific purpose and with specific modifications.

As far as overall production goes, Monument is still operating on a smaller scale. With no other employees, it takes the duo about a week’s worth of work to finish a cab from start to finish without any breaks. However, both Jones and Johnson have day jobs and perform their craft during the only time they have off: nights and weekends. Jones says, “Last year, we made about 25 cabs in total. Right now, most [orders come in] through word of mouth, but if someone wants something, and we have time, we’d love to build them. It’s a lot of fun for us.”

Their outlook for the future remains optimistic and unwavering. As a specialty business, Monument has already provided cabs for talented artists like SubRosa, Rye Wolves, Scrolls, Tarahumara and many others. “We’d like to build more someday and make money doing it,” says Johnson. “I think it’d be cool to get into using more solid, harder woods and see how it sounds once we put it in. We’re always looking to do more experimenting and just have fun building up our small business.” If you’re interested in seeing more from these guys, visit their Facebook page for pictures and details, or shoot them an email at monumentcabs@gmail.com.