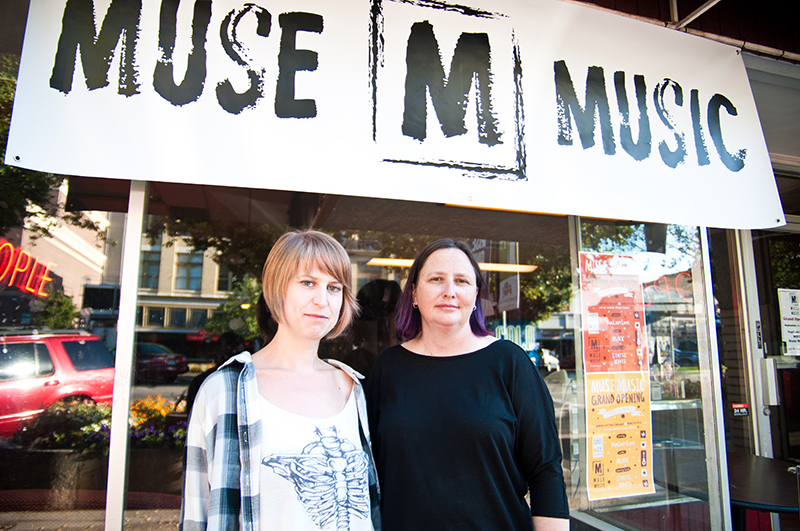 After a decade of being an institution of culture and music on Provo’s University Avenue, Muse Music shut up shop earlier this year and has reopened a few blocks southwest—on Provo’s resurgent Center Street. On Sept. 11, Muse opened its doors, backed by an incredible lineup of local musicians (MiNX, Van Lady Love and Static Waves), and ushered in a new era in its storied history. SLUG caught up with Darcie Roy and Debby Phillips from Muse to talk about memories of the old room and hopes for the new.

SLUG: What spurred the move to the new location?
Roy: Cost. I think Muse probably changed hands so many times because, eventually, everyone who owned the business realized this. All-ages venues are labors of love. … Only a third of the physical location was (almost) turning a profit. Rather than passing along the money pit, we decided to break the cycle.

SLUG: What are you going to miss the most about the old space?
Roy: The history—the brick walls, the stickers on the door, fun times in the back alley, that kind of stuff. I’ve only lived in Utah since 2011, but even I’ve got memories attached to the place.

SLUG: What are you going to miss the least?
Phillips: The acoustics. It was not an easy venue to mix. … Our sound team is excited about the new space.
Roy: Being next door to Velour. Hands down. Nothing against them, of course; in fact, that’s why it was such a problem. Muse spent nearly a decade in Velour’s shadow: Muse was always considered the “stepping stone” to Velour. The new space gives us independence.

SLUG: What differentiates Muse from Velour and other local venues?
Roy: Our most loyal musicians and patrons are constantly telling us how much they love our warm, encouraging atmosphere—it makes them feel comfortable. Even when the music gets loud, that’s the vibe we want to maintain.

SLUG: Since taking over Muse, what are some of the most important lessons you’ve learned about this business?
Phillips: You’ve got to keep going. It’s going to get frustrating at times, but if you love music, you can’t stop.
Roy: There’s no such thing as a work-life balance in the music business. If you’re doing it right, you are your business. So you’ve got to get a handle on double the self-esteem issues—I’m still working on that. But considering we’ve owned Muse for about three years now, I think I’m doing pretty OK.

SLUG: What attracted you to the new location?
Roy: We’d wanted to stay in downtown Provo, and the new location is right at the heart of it. It’s close to both the train station and the highway. It’s got a larger capacity than the previous space. It’s got a green room and lots of indoor load-in space, unlike our previous location. And the price was right.

SLUG: What are some of your goals as you reopen, and how do they compare to your goals a few years back?
Roy: We’ve had basically the same goals all along, but now we have a better opportunity to reach them. Muse is about community, about inclusivity, about diversity. Utah, overall, is pretty homogeneous—most people here play it safe and stick to what’s worked in the past. But “safe” is boring. If you really want to grow, you’ve got to take a few risks.

SLUG: In what ways has the growth of Provo’s scene surprised you?
Roy: I’d moved here because some friends of mine had said there was a lot of live music—I was like a hippie traveling to Woodstock. I just wanted to be entertained. But most of the people here weren’t just going to shows or playing in bands—they were actively involved in the scene’s growth: The Rooftop Concert Series is a great example of how a few music lovers took it upon themselves to showcase our local talent. The Provo government is also extremely supportive of the arts scene. The city’s been really helpful with our transition to the new location.

SLUG: How do you see the Provo music scene evolving over the next five, 10 years?
Roy: We’re going to continue to see bands hit national-level status. I don’t expect we’ll ever be “the next Austin” or anything like that (we hear people say that a lot), but I don’t think we should try to be “the next” anywhere. Provo’s unique already, and that’s what makes it cool. However, I anticipate that Provo will become a big enough deal that more national bands will route through Utah. There’s actually a few projects in the works that, in five or 10 years, could make that happen.

As small as it is, Provo has a lot of talent, a lot of incredible bands. It needs at least two viable options for these acts to get onstage. The reopening and future success of Muse Music, combined with the continued success of Velour, is an essential step for Provo’s—and Utah’s— music scene to mature.