00:00 / 16:39
Spotify Stitcher
RSS Feed
Share
Link
Embed
It doesn’t take a genius to recognize that William Fitzsimmons has a solid grasp on what it means to be a human being. In fact, he’s dedicated most of his life so far to exploring the human condition. Drawing from his personal life and experiences helping others has rendered him capable of understanding and communicating deeply personal lyrics in a way that is not only unique but collectively relatable. 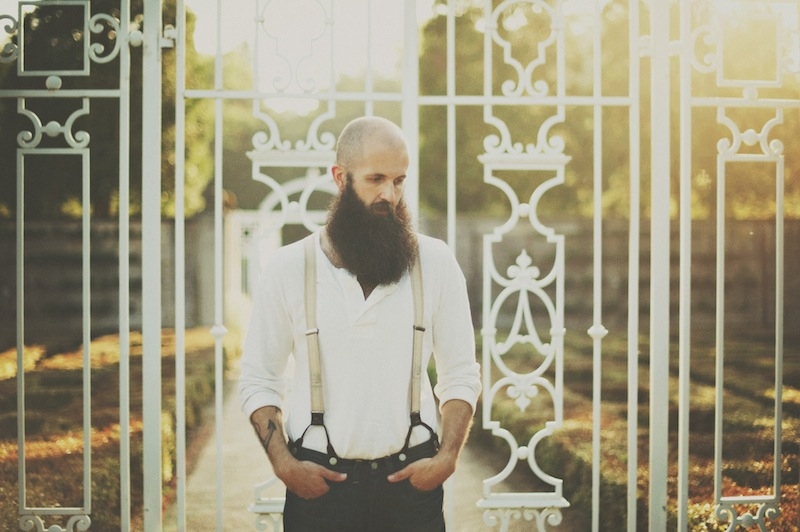 “When I started [playing music] it was 0 to 100, it was all about me getting my own little angsty teenage ‘my dad wasn’t there’ kind of bullshit out." Photo: Erin Brown

It doesn’t take a genius to recognize that William Fitzsimmons has a solid grasp on what it means to be a human being. In fact, he’s dedicated most of his life so far to exploring the human condition, having worked as a licensed counselor, while currently balancing being a father and musician. Drawing from his personal life and experiences helping others has rendered him capable of understanding and communicating deeply personal lyrics in a way that is not only unique but collectively relatable.

His signature soft sound originates from being raised by two musically inclined parents, who also happened to be blind. This offered him the opportunity to “use [music] as a communication tool and not just as entertainment,” he says. “In the blind community you’re absolutely devoid of the main sense that we all use.” The use of music as a means of communication has also afforded Fitzsimmons the ability to hear music the way that his parents do. “My mom can tell that I’m in the room because of my smell, the way my feet hit the ground when I walk, so yeah, your ears change,” he says. “You do hear things differently. And maybe that’s why I like soft music, because it gives you that chance to appreciate all the sound. It’s not some big wall of noise coming at you; you’re actually listening to the space. When you’re playing solo acoustic guitar, so much of it is the air, it’s even in the recording and in the guitar that you’re picking up, it’s not just in the vibration of the strings.”

The attention to detail and spatial awareness gives Fitzsimmons’ the ability to create an intensely intimate climate for his music to not only help him face his own demons, but to encourage anyone else facing obstacles to join him in his vulnerability. “When I started [playing music] it was 0 to 100, it was all about me getting my own little angsty teenage ‘my dad wasn’t there’ kind of bullshit out. And it kind of clicked when people started writing me messages on MySpace … they were sharing these incredibly intimate things, just as intimate as what people were telling me in counseling sessions, it was honestly almost the exact same kind of things. It was eerie at first, but then it kind of made sense—I understood because it was doing the exact same thing for me. So I started to make sure I was always aware of that when I was writing, so that it wouldn’t just be me trying to express something, but it would be me trying to invite someone to share those feelings,” he says. When asked about whether he aimed to use his music as a means of therapy for others as well as himself, he says, “Now it’s like a 50/50 split. I think that, with every song I write, of course I’m trying to figure something out, but I really genuinely want someone to be able to listen to it and think legitimately ‘Wow, this guy gets something that I’m going through.’”

While those who listen to Fitzsimmons are encouraged to extract anything that may help them heal, Fitzsimmons finds himself soothed by the idea that his audience finds peace in his music. “It’s incredibly rewarding,” he says. “I love it. It’s only a mild bummer because, when people are like ‘I really connected to your music,’ it’s because I know they’re not saying ‘Hey man, I’m really happy, life is so great, I’m so psyched on everything,’ but they’re being honest.” His fans also heavily inspire him, along with the vastly different people he has come across in his life, not only in a clinical setting, but people he meets in ordinary situations as well. “Watching people struggle and somehow find a way to persevere through those things is always a big motivator for me,” he says. “Some of the stuff, I guess it’s kind of awful, but some of the stuff that’s inspired me the most are the tragic ones. Maybe that’s terrible but there was a few people that I worked with that stuck with me, and I think they always will. … There was a young woman I got to know when I was working in the hospital. This was a long time ago, so I was pretty young. But she was really similar to me—she was just a sweet, normal, pretty girl and she just had an awful fucking situation. She was massively addicted to heroin, she was living on the streets and she ended up dying, and not in a very honorable way. So things like that, those few stories have stuck with me more than anything,” he says. “I like people that are living in the trenches of life. I don’t put a lot of stock in people who make good decisions when they’re easy to make. I like people who live in the shit and they have to make compromises and they have to do hard things.”

Fitzsimmons acknowledges his need for self-assessment and criticism in life. We both agreed that a life devoid of rejection, disappointment or any other negative emotions detracts from one’s whole experience as a human. “I mean life is mostly not great,” he says. “We spend all this time chasing something that isn’t necessarily worth going after. There’s a lot of suffering in life—people will die, people will leave you, you’ll be disappointed and facing that I think has a lot of value. I think that’s why my music seems so depressing, because I’m trying to face that stuff and find the value in it and be able to appreciate other people while I’m doing it.” he says. The self-criticism is something that he (like anyone) recognizes as an agonizing necessity of life. When asked about how one deals with criticism on such a large scale, he says, “I’ve been crushed, you’ve been crushed before, you’re a human being. You’ve had moments of disappointment and insecurity just like anyone else. Those emotions are universal. They might seem a little different if you’re doing it in front of 500 or 1000 people, but when you’re laying down on the pillow at night, you have to face yourself. That’s the hard part. That’s something we all have to do anyway. That’s not unique to music.”

When asked about his songwriting process and the role music plays in his life, he insists that he’s a writer, not a musician. “Music to me is more of a guide than it is the leader,” he says. “It’s not the commander-in-chief, it helps. If I’m wondering how I’m feeling, I just start playing and I let the music direct that a little bit. But once the words start coming, that’s when I feel directed, that’s when I feel really motivated, when that first line or that first word comes. The music is kind of a background; it assists. My band is amazing—these are brilliant musicians, and I’m not one of them.” He suggests that for him, the lyrics are what he excels at, they are what naturally spring from inside. “The key for me is to get to a place of naked, shameful vulnerability,” Fitzsimmons says. “That’s where the best stuff comes from. When the self-censorship is completely removed. … There’s craft that comes at some point, you want something that makes sense syllabically and it rhymes in certain spots and stuff like that but that’s not the heart of it. The heart of it is trying to say something that someone would be moved by.”

While Fitzsimmons acknowledges the need for a stripped down mentality when it comes to songwriting, while also recognizing that his craft can never be perfected, something that he himself has struggled with. “The second record, I did it at home,” he says. “I did it by myself. I spent 6 months making that record. And there were a lot of other issues, I was diagnosed with OCD 15 years ago, and it was little bit out of control on that record, so there were extenuating circumstances but whenever I write, or whenever I’m interacting with people, I focus on the shit that matters and let the other stuff go. A song is never meant to be perfect, that’s not the point, it’s supposed to express something, and shooting for perfection is the worst thing you could do, because god forbid if you get there it’s going to be so devoid of feeling and sincerity that it’s not going to say anything to anybody.”

Be sure to catch William Fitzsimmons Tuesday, May 13 at The State Room!