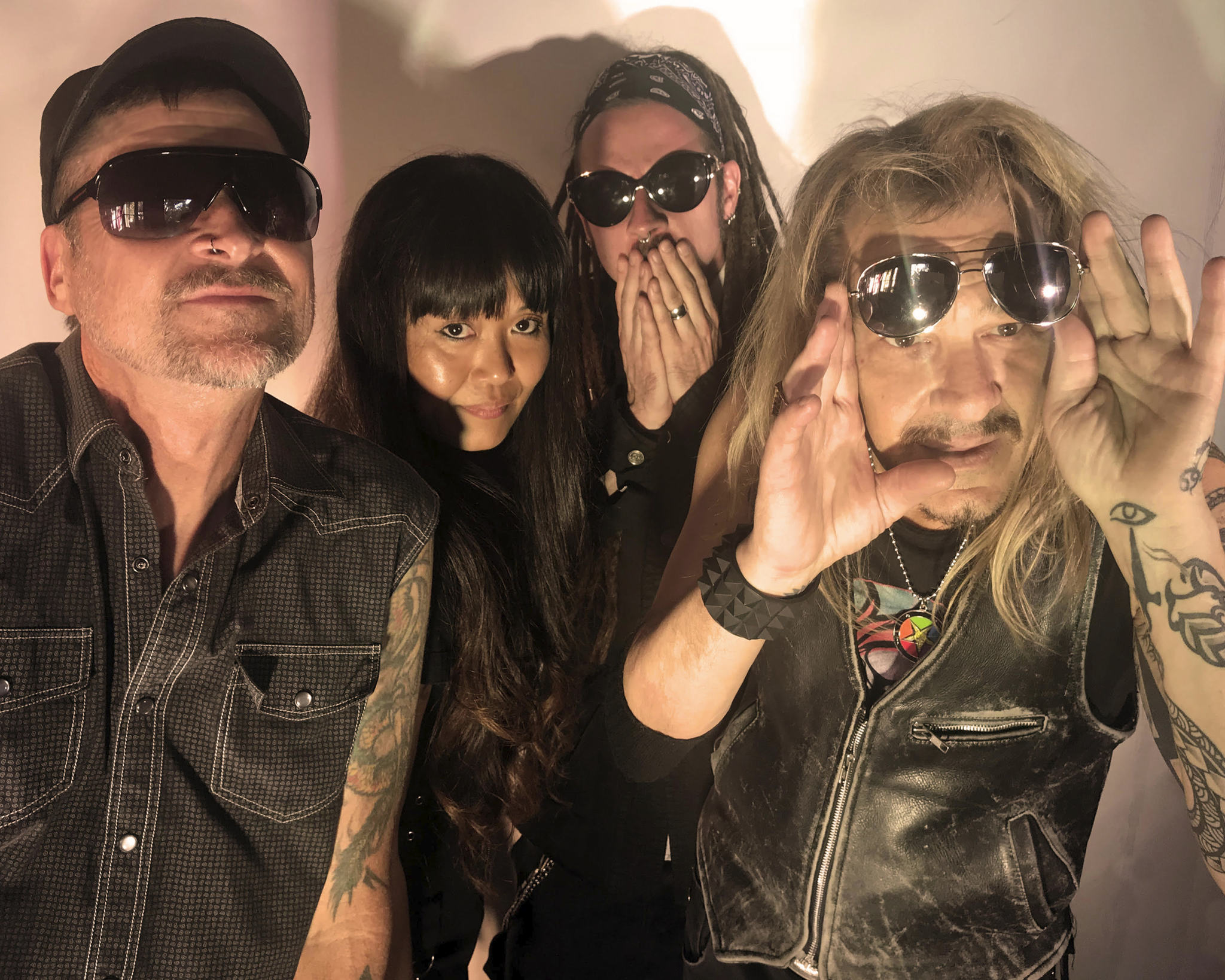 My Life With The Thrill Kill Kult: Gabbing with Groovie Man

Thrill Kill Kult’s front man and founding member Groovie Man, after his participation in the Wax Trax! Q &A touring panel for the movie Industrial Accident: The Story of Wax Trax Records, discusses their upcoming tour and took a brief look into the history of the band. We grieved, loved and laughed as we conversed about the days of yore.

SLUG: What spiked your first interest in music?
Groovie Man: I lived in a suburb in Illinois called Rocksford and that is where Cheap Trick was from and they were my friends, although they were older guys. I would go to their shows. Then in ’77 there was a punk club called La Mere Vipere. I went there with my girlfriend and hung out and danced and stuff. The local magazine had put a picture of me dancing at the club with the wraparound sunglasses and I was signing autographs for being there. I wasn’t even in a band yet. We would dress up punk because that was the new freedom for expression and drive 90 miles into Chicago with my girlfriend Malice and we would just dance and be decadent. I was a bar performer—I was an artist type and I was approached to become a singer. I had never sang before but I gave it a shot. That started my journey into music, my first couple of bands and then into Wax Trax!

SLUG: How did My Life with the Thrill Kill Kult come to be?
Groovie Man: I met Buzz on the Ministry tour in 1986 and we just became friends along the way and hung out. We never talked about music or anything.  We would go to Boston for a concert and we would see him and the friendship started to grow. Then he moved to Chicago and lived with me for a while and then got his own place. I would go over there with my cassettes and collection of stuff I recorded and my lyric notebooks. We just literally partied to create and dabble with ideas. He had some backtracks, or old songs from his previous bands and I had bits and pieces from my two previous bands. We just started molding songs and put together three for an E.P. and showed it to Jim. I was working at the Wax Trax! Store doing various jobs so I had access to him as we were not recording artists for his label at the time. I was signed with an affiliated label when Wax Trax! brought Bauhaus over. I met their manager in 1981 and he flew me over to London to replace a singer in a situation 2 band that was through Was Trax! before Wax Trax! was full blown. They knew what I was capable of through the other band. The Name My Life with the Thrill Kill Kult was from some tabloid Headlines that I had picked up when I lived in London in 1983, and just kept it in my working notes. When we decided to form and put together the band, we named it after the tabloid and then they released the E.P.

SLUG: What was your first interaction with Wax Trax!?
Groovie Man: My first interaction with Wax Trax! was in 1978 I lived in Chicago and I knew these girls that lived at the end of my street. I met them through a theatrical performance group that was in the neighborhood. It was set up like the “Factory”, a place where the director lived there with his muses and all these people would come in dress up and do performance art. Through that we I met these girl named Marti Marsten and she said these guys were coming from Denver that have a really cool record store and were going to have a party, I went and that is all how it connected.

SLUG: If you could go on the road with any Wax Trax! artist who would it be?
Groovie Man: That is a tough one, probably Chris Connelly or Paul Barker. I just saw them recently and we are just so close. We are like best friends I love them so much. They are just so wonderful and then we have this common bond now. It is like I watched them grow up and they watched me grow up. It is like thirty years later or longer for some us. Thrill Kill is 32 years old this year. The whole frame of mind of the people that are still around from the store, is that of family. Jim Nash was a father figure one who understood and was interested in what you were saying, and did not just give you a head nod. He would help you learn about something and help you grow. It was a great adventure with so many facets.

SLUG: In previous interviews you mentioned that you were going to revisit the side project Darling Kandie. Is that still happening?
Groovie Man: It’s undecided who to produce it with. Mars is so busy, it is hard to get to those side projects. I hope that we do. It will always be a tribute to William Tucker, as he was such a wonderful person. It was sad when he passed away. William Tucker took his own life in the bathroom at his house. He had physical issues going on that kept him in severe, constant pain. He had a weird virus that was in his intestines and I believe that is what killed him, in the end. He just could not take it anymore. I was around him a lot and we were recording what Darling Kandie became. I named it Darling Kandie after he died. All I had when he left us was a box of discs and cassettes, all those old computer cards and a note that said, “Hey Frankie, l am really sorry but I am going to have to cut this short. If you have any questions just call me on the bone phone. Love, William.” Paul barker also got a special box of stuff with a note just like me, as we were the ones he was working with. I had all the stuff and I was living with a partner named Dave Collins that was a producer and a systems developer of software for music programs. He was smart, he helped me put it all together, and he helped me ignite the project. He said, “You gotta finish what you are doing.” I was so devastated to lose William I just did not see it coming.

SLUG: What is in the works for the side projects Katastrophe Clown and Trash Deity?
Groovie Man: When the tour is over Trash Deity will be the next album for a 2020 release. I have a bunch of tracks that I need to work on and write stuff for but I can’t right now because I am still learning my House of Strange Affairs songs for the tour. Trash deity will be pursued. Katastrophe Klown I do with Justin who is a shared drummer with Skinny Puppy. We recorded that in Bologna, Italy at his studio there, where he also does his band kETvECTOR. His album came out last year and is brilliant. To me it was the best of the year. It features Ogre, Edward KaSpell and Buzz McCoy and me, from Thrill Kill Kult.

SLUG: Do you ever plan on releasing the art film titled My Life with the Thrill Kill Kult?
Groovie Man: We had clips and ideas, if I found someone that had some editing skills we could put something together that would probably seem like a documentary collage, but trippy. Something that is like history that is modernized through somebody’s technical style of blasting out images or stretching them. You know something crazy, and update the whole retro thing and turn it into something that is now. I want to go into the psychedelic and trippy. Graphics on the computer are fabulous now. I love all that stuff. I love a trip beyond. I don’t need to see the singer anymore or those pretending to play their instruments. I don’t give a shit about that. I just love the artists that have had the option of being able to have a film, and not just a bunch of stupid clips joined together. It works when they are club videos, that’s fine, but now it’s a little different because we have these gorgeous televisions. We still have these old images. That is my bitch as an artist, is to break out of the old and try something new. Take a chance with something that is so new that it might not work. If it doesn’t work, maybe it’s working. You don’t know you are the artist.

SLUG: What creative process do you go through while making an album?
Groovie Man: It’s like our life exists and then we take time from our lives to go do our recordings and do our band. Once we begin this process, a couple times a week I go over there with my notebooks and my ideas and he usually has backing tracks. I will listen to them and improvise a bunch a stuff over the track after I have heard it a few times, or I will have the tracks on my computer. I will just have the rhythm and I will go in and literally express how I feel, what’s going on, sometimes it is really powerful other times isn’t. We capture what we can and then he’ll go through that and pick out what works and what doesn’t work, and things start to come together. There were a few tracks on the last album towards the end that he was not happy with certain parts and start over with different lyrics or a different melody until it works. I always call it the jigsaw process. It is all free, expressive, wonderful and insane and then all the sudden it is focused down to a fine point. It’s finding the right piece of this puzzle that is taking time to put together your whole vibe changes into this more serious finale of the song. There was no hurry to finish the album. It is always a lot of work, especially at this point we want it to be perfect for us and for our fans.

SLUG: What do you have planned for our dedicated industrial fans here in Salt Lake City?
Groovie Man: There will be more of a set, we are designing a set of windows from the album and we are working on having the projection of the old Thrill Kill Kult imagery playing through them. There will also be Justin, Mimi, Buzz and myself sharing vocals from time to time. We plan on playing the songs that the fans wrote in and requested. So, we have taken their requests and made the set list out of that. The stuff we have not done in a while and then some of the hits. It will be a full show!

It appears that Wax Trax! is more than just a legendary music label—it is a family of very talented musicians and the people that support them. Be sure to stop by the Metro Music Hall on May 7  to catch My Life with the Thrill Kill Kult and the Strange Affairs tour with special guests Curse Mackey and Dude Cougar. This is a show that you will not want to miss. Get there early to grab great parking or Uber or Lyft to really get your party on. Doors are at 8pm and you can still pick up your tickets in advance on Eventbrite.