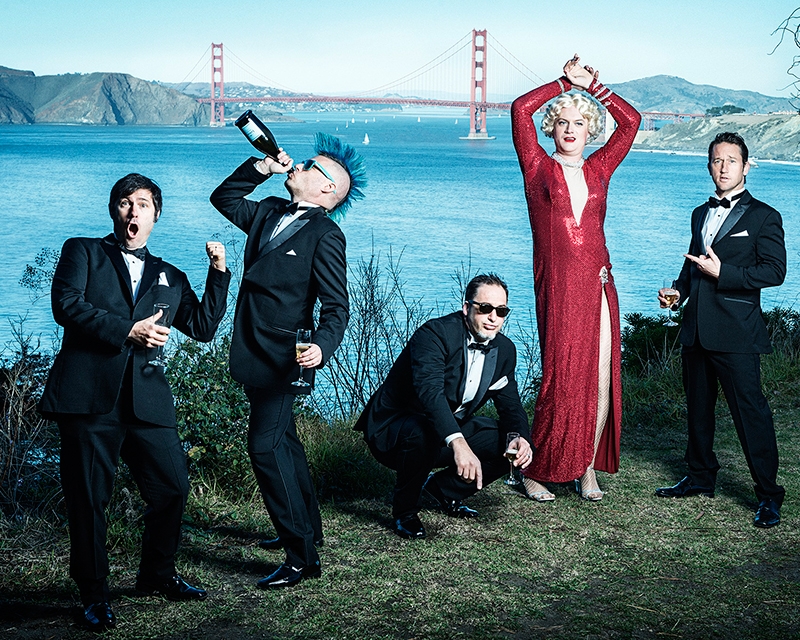 Me First and the Gimme Gimmes really need no introduction—you should know their shtick by this point. Just in case you don’t: Swingin’ Utters’ Spike Slawson (vocals), NOFX’s “Fat” Mike (bass), Joey Cape and Dave Raun from Lagwagon (guitar and drums, respectively), and former No Use for a Name and current Foo Fighters member Chris Shiflett (guitar) don their finest attire, drink too much, and crank out skate-punk covers of just about everything.

Their first full-length was 1997’s full-length Have A Ball (Fat Wreck Chords), which followed countless seven inches and line-up changes. It’s theme: contemporary hits. Since then, the band has released four other full-lengths, all on Fat Wreck: ‘99’s Are A Drag (show tunes), ‘01’s Blow in the Wind (oldies), last year’s Take A Break (soul/R&B hits), and their latest, Ruin Jonny’s Bar Mitzvah. This time it’s a little different in that album is live, recorded at (you guessed it) little Jonny’s passage into manhood, and there’s no apparent theme or central era of music in their sights.Some champion the band’s ability to seize mainstream culture, fill it full of power-chords and turn it into something with which punks can identify; comedic cultural piracy for the “who cares” generation. Others, however, view it as testament to how easy it is to boil down the NOFX/Lagwagon formula that’s served as the blueprint for countless acts over the years, apply no imagination whatsoever, and cash in on a large, ready-made audience. Both assessments are probably pretty accurate. That in mind, I recently spoke to Spike about all things Gimme Gimme:

Me First and the Gimme Gimmes: It’s actually hard to keep it frivolous, like a side project, because it kind of took on a life of it’s own. But we’d like to keep it just something that’s fun. I know that some of the elements that make other bands serious are happening with this band. So it’s important that we keep it funny and have a good time doing it.

SLUG: How do you choose the songs you cover? Is there a rule in decision making at all?

MFGG: We play them, and if they work out in ten minutes then they’re generally worth at least trying to record. It’s usually songs that suck that we’re gonna do. Not suck; the songwriting might be good. You find something that if you heard it in a different context, if you heard the melody over guitars instead of synthesizers or a string section, you would like it. That’s kind of the principles we were operating under on the first record.

SLUG: Are there any songs that weren’t even worth trying to record?

MFGG: The Irene Cara song from Flashdance, “What a Feeling.” “It’s Raining Men” also didn’t work out. Mainly it’s playing them. We’ll give them a shot, and if we’re just not hearing it within five minutes we move on. There are always ideas for songs to cover.

SLUG: Are there any songs you would never even try to cover?

MFGG: Hip-hop songs would probably be a safe bet that we would never try to do that. They just wouldn’t translate. People do it, and it doesn’t translate.

SLUG: What song would you say you’ve done the best job with?

MFGG: I like “Over the Rainbow” on the second album. That’s one of my favorite songs that we did. And then “Country Roads,” too. Those would have to be my two favorites. They sound natural, like they’re really our songs, kind of.

SLUG: What kind of songs would you want to cover on your next record, ideally?

MFGG: Just all over the place. I want to do “Moon River,” but I don’t know if that’s going to work out. It’s less about the unifying musical theme than about where we’re playing, like the bar mitzvah theme. I think, learning from this last record, if we practice a little bit more next time, live is actually the best. I mean there are all kinds of places to play like state fairs, cruises and funerals—we’ll play pretty much whatever.

Just after that the tape in my recorder ran out, but Spike still had another juicy piece of punk rock gossip for me. He told me about a band he’s trying to put together with Swingin’ Utters bandmate Darius Koski (guitar, backup vocals, accordion) and One Man Army’s Jack Dalrymple (lead guitar, vocals) tentatively called The Pieces. Don’t consider this an official declaration—just don’t steal the name.