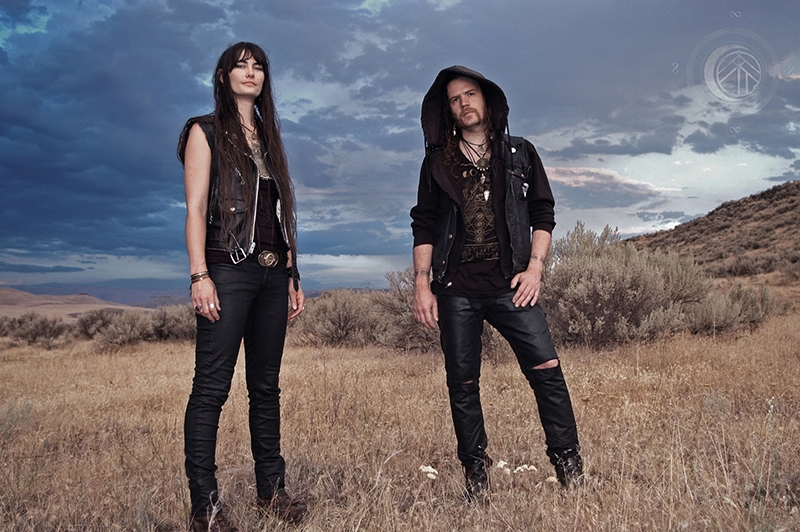 Natural Causes: An Interview with Wolvserpent

When I think of Idaho, I am reminded of giddy little trips to the nearest state border from Logan, Utah, to buy Mickey’s 40 ounces and clove cigarettes, marveling at the porn selection available only minutes away. Little did I know that, as I was stocking up on forbidden fruit for bacchanal weekends, a serpent was tempting two talented musicians with visions of doom and drone. Wolvserpent, a two-piece based out of Boise, consists of Blake Green (vocals and guitars) and Brittany McConnell (drums and violin). They return to SLC on July 24 to play at Urban Lounge. Their music is like an obsidian mirror to life in our neighboring state—black reflections of various influences curved into an atmospheric, transcendental form of heavy metal in a league of its own. “The environment in Idaho is a source of inspiration for sure, both the ‘positive’ and ‘negative’ aspects,” Green says via email. “This includes the wilderness as well as the more populated areas and the effects they have on our surroundings.” The inspiration he speaks of seems to manifest itself in layers in their music, some more obvious than others, like the use of nature samples such as trickling water and chirping birds on the title track of Perigaea Antahkarana. The more mystic reflections require patience to grasp: Many of their tracks push the 20-minute mark and feature extensive violin passages. Listening to the whole album from start to finish definitely has an effect on more senses than just the sound processed by the eardrums. Much like the trances invoked by medicine men and initiates of nature worship, the approach taken by Wolvserpent utilizes the tools at their disposal to bring audiences on their psychonautic journey. “Repetition, tempo and time signatures are a big part of the approach,” says Green. “It can be very ‘boring’ music if not listened to properly.”

Whether one listens to Wolvserpent “properly” is subject to the tastes and attention span of the observer. Many people seem to appreciate their originality and style, as their ritualistic tunes caught the attention of the right people, and Perigaea Antahkarana was released on Sept. 17 via Relapse. “I was very happy with that release,” says Green. “I thought it was rather cool of them to take on a project as inaccessible as ours.” Their newfound accessibility seems to be pushing Wolvserpent in the direction Green wants it to go. “Our music is reaching more people who can appreciate it, and our shows have become a more positive and balanced experience.”

While studio work and concerts are two quite different things, there’s no disparity between the sounds you hear on Wolvserpent records and what you’re blasted with at a Wolvserpent concert. “The majority of this material was written for live performance,” says Green. “Basically, what you hear on the album is what you get in the live setting.” Due to the complexity of their music, I was curious about the obstacles that the band faces when translating their doctrine for the stage. He explains, “Sometimes concentration, relaxation and stress/anxiety is a challenge for me. But that is part of the reason why we play the music we play, to overcome these types of challenges that have become so commonplace for so many in this modern world.”

His answer illustrates some of the strong convictions driving the band. Wolvserpent is a tool for personal expression and development. In our era of bio-mechanical consumerism, where we seem but one step away from willingly having rectal-powered iPads installed for a small fee, Green seems more skeptical and cautious of the direction we are headed. “I generally resent the majority of our modern technology, how it is used, marketed and [its] consequences,” he says. However, not even Green is completely free from the vices offered by the Skynet that is the tech world (and no, it’s not one of those Japanese pleasure dolls). “But my guilty pleasure is the 160-GB magic handheld music storage device.”

The music on that wonderful contraption serves him well on the road, which has taken his band all over, including Utah. Recently, Wolvserpent visited our city and played at CrucialFest with notable local metal acts SubRosa and Gravecode Nebula. If you missed that one, don’t feel like a dumbass just yet, as Wolvserpent will be back: Be sure to make it out to the Urban Lounge on July 24, where they will be playing with Ash Borer and Hell. Speaking on behalf of his band, Green proclaims: “We are both really excited to share the stage with Hell and Ash Borer again. Every time I see either of those bands, they have become exponentially better than the last.”

In the meantime, you can pick up T-shirts, vinyl and other relevant shit at Relapse Records (relapse.com), Bandcamp (wolvserpent.bandcamp.com) or their official site (wolvserpent.com).