Zoo, twelve cuts of tuneful despondency, finds the band stretching beyond their “razor-to-the-throat” approach, listlessy incoporating strains of surf, post-punk and goth into their acrid blend of melody and bleakness.  While the approach can whip Internet hardcore kids into a snotty-nosed, finger-pointing frenzy, guitarist Anthony Anzaldo says it’s just part of the biz. “We don’t go into the songwriting process and say, ‘Hey, let’s not write fast parts.’  It’s really not a conscious thing.” 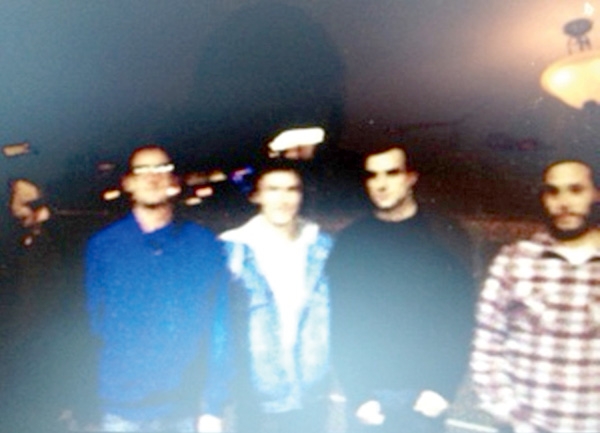 “We still look at ourselves as a band that plays basements to thirty people. That’s where we come from.” –Anthony Anzaldo.

Lemme tell you about 2005. Fresh outta high school and living on my own, I was nurturing a malnourished soul on a heady diet of rage, bitter hopelessness and hardcore. I don’t recommend the approach, but it makes for decent writing. Somehow, I got my paws on the debut 7” Ruined by a California band called Ceremony, and my whole world changed. I saw the future and found peace with the world, maaan. Just kidding. Things still sucked, but I dug the record a lot. Ruined featured short songs, venomous lyrics and a resonant violence that shook me with all the subtlety of a nailgun to my crotch. “It’s dog eat dog in a place like this/ Every man for himself so I use my fists!” Good gravy, I need to punch something right now.

But this ain’t about me and my Holden Caulfield complexes. It’s not even really about hardcore. It’s about Ceremony, a band that has slagged through the hardcore circuit for the better half of a decade, poised and ready with an album of new jams slated for release on the indie juggernaut Matador Records.

Zoo, twelve cuts of tuneful despondency, finds the band stretching beyond their “razor-to-the-throat” approach, listlessy incoporating strains of surf, post-punk and goth into their acrid blend of melody and bleakness.  While the approach can whip Internet hardcore kids into a snotty-nosed, finger-pointing frenzy, guitarist Anthony Anzaldo says it’s just part of the biz. “We don’t go into the songwriting process and say, ‘Hey, let’s not write fast parts,’ or, ‘Let’s try to sound exactly like this!’ It’s really not a conscious thing.” Regardless, having fine-tuned their chops over countless US tours and a handful of releases, Ceremony’s focus has certainly shifted.

The title itself, Zoo, is a reference to the absurdity of human interactions and commodification. We pay to watch people act, to make music, to play sports. We even pay to see them bump uglies from time to time. It’s a curious observation, penned in a statement on the band’s website via vocalist and principal lyricist Ross Farrar. “Ross is trying to see the good in people and the things that we do,” says Anzaldo. “Not to focus on how we hurt one another like he did in the past.” The shift brought about new critical attention and when Matador label reps caught wind of 2010’s Rohnert Park, they came to a raucous L.A. show and offered to release the band’s next record. While not specifically known for a hardcore roster (excluding Fucked Up), the influential label seemed a good fit, and the band enthusiastically agreed. “Everyone there loves music as art,” says Anzaldo. “You go into Robby [Morris, Matador’s A & R representative]’s office and he’s got original Minor Threat, Negative Approach and Necros flyers on his wall.”

While the label change will expose the band to a more eclectic audience, Anzaldo is all too aware that certain fans will jump ship. “We’re going to lose fans with every release,” he says. “I remember when Scared People came out, which I thought was pretty similar to the previous record, and it was just too left of center for some people. That’s cool. No one has to like our band.” The phenomenon has plagued punk and hardcore bands since the salad days of yore, and exposure and opportunity bring about new challenges to credibility. Still, Anzaldo maintains that any deliberate effort to halt or impede the evolution of the band, to repeatedly re-write the same record, is antithetical to the ultimate goal.

“We still look at ourselves as a band that plays basements to thirty people. That’s where we come from,” he says, “but we’ve grown so much as individuals.” With plans to share the stage with The Rival Mob, Pissed Jeans, Hoax, Nails, Cold World and even Old Firm Casuals, Ceremony show no signs (despite the incessant bleating of message board naysayers) of abandoning the hardcore scene that spawned them.

Zoo certainly isn’t lackluster either. Sure, it lacks mosh parts and thirty-second ragers, but it thrums with the same nervous urgency that’s permeated Ceremony’s discography since inception. It’s a triumphant step into a new plane that suits the band just fine. Out of step?

So, lemme tell you about 2012. I’ve finished college, travelled a bit and seen some shit. Not ‘Nam vet shit, but mid-twenties male shit. Anger’s given way to exasperation, and any desire I had to tear the world a new one has given way to apathy and the overwhelming urge to marry, mate and begin my slow crawl into damning adulthood. I haven’t thrown a decent punch in years. I sit at home, write and think about the things that keep me sane: some friends, clean sheets and all the hilarious YouTube videos I can shake a stick at. Then I listen to Zoo and think about applying for a better job. Please don’t feed the animals.

Ceremony will be performing at SXSW in Austin, TX as part of the Power of the Riff showcase on March 16 at Scoot Inn and March 17 at Red 7 as part of the Flowerbooking SXSW Showcase.