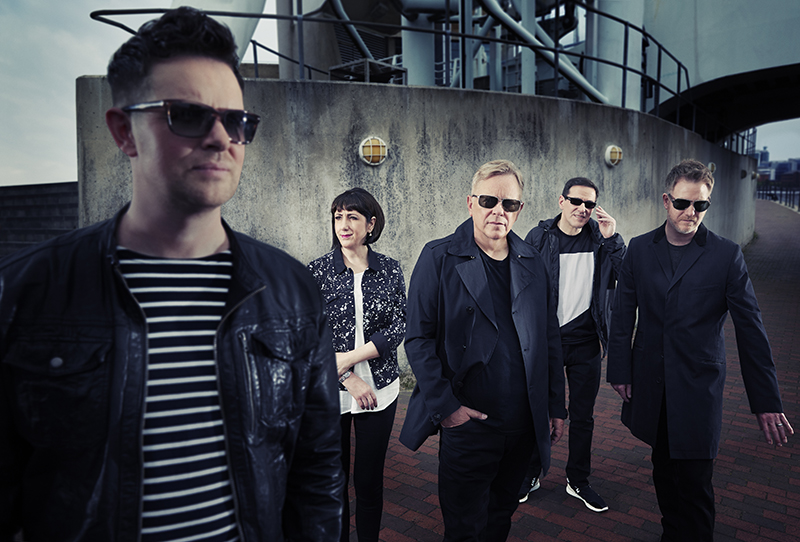 There are bands that leave a mark on their generation, and then there is New Order. Igniting a career of perseverance following the suicide of Joy Division vocalist Ian Curtis, New Order wound post-punk alienation and the pleasure of the dancefloor into always unconventional pop songs, crafting themselves the musical pulse of their time. Cautiously exuberant, industriously innovative, the Mancunian titans are stepping back into the limelight with their first new studio album in 10 years—Music Complete, out on Mute Records on Sept. 25.

As it is with many groups carrying on into their fourth decade, New Order have weathered a fair amount of tension since their formation in 1980. In 2007, the departure of original bassist Peter Hook caused the group to reconfigure around original members Bernard Sumner (lead vocals, guitar, synths) and Stephen Morris (drums and percussion, keyboards, programming) and touring member Phil Cunningham (keyboards, guitars, electronic percussion). The addition of Tom Chapman (bass, synths) and original member Gillian Gilbert (keyboards, guitars)—who had left the group in 2001 to take care of her and Morris’ children—shored up the group to a five-piece with forward momentum.

That momentum carried from select live dates beginning in 2011 to the writing of Music Complete, New Order’s 10th studio album. “I think we got a bit bored of playing a lot of New Order songs and Joy Division,” Gilbert says of the decision to create a new album. “We thought it’d be nice to play new material that we’d done with the five of us, to see if we could carry on a bit further. We were all having such a good time playing together live, we decided to go for it.”

Heralded by the bold lines and the bright, vibrant pastel of its cover artwork and media campaign—courtesy of Peter Saville, the group’s long-term graphic guru—Music Complete is, as any New Order release is, a complete statement. It features big-name guests: La Roux’s Elly Jackson, Brandon Flowers of The Killers and Iggy Pop, and production work from The Chemical Brothers’ Tom Rowland. The album brandishes the guitar-based leanings of more recent albums and the group’s side project, Bad Lieutenant, and the subversive, unmatched electronic work of early albums like Power, Corruption and Lies and Low-Life.

As the newest member of the group, Chapman concurs that revisiting classic New Order songs from their prime in the ‘80s prodded them back into the studio—sublime electronic tracks like “Temptation,” “The Perfect Kiss,” “Bizarre Love Triangle” and, of course, “Blue Monday” (which still reigns as the biggest-selling 12” single of all time). “The one thing that we said is, ‘Let’s make a dance record,’” says Chapman. “I think we also didn’t want to run the risk of becoming a ‘dinosaur band.’ It was important for us musicians to be creative and go in the studio and write material—it felt natural.”

Marking a return to fine form, Music Complete also yields an uncompromised style from from the group of veteran musicians. Like the old days, bandmates tinkered with electronics and jammed, and Sumner exclusively wrote lyrics over the subsequent tracks, two of which—the dark, goth-shaded “Singularity” and the mellow groove of “Plastic”—were tested out live. “We did a bit of everything, I think,” Gilbert says. “It’s worked out that you have a lot of different styles going on.” Analog synths and sequences abound on the record, complemented by wiry bass riffs, jangly guitars and crisp drumming. Chapman adds, “We all had really specific ideas of songs, and the whole process was just sort of sharing those ideas and coming up with overdubs and ideas to complement the songs. The main focus was not really on the individual instruments played, but the end result of the song. That’s really what mattered to us on the album.

“In New Order, everything grows under the microscope,” Chapman says. “It’s quite time-consuming.” The attentive approach was something Gilbert was familiar with, and she credits the group’s longevity and success to this dedication and the group’s flexibility. “It’s a different way of looking at it,” she says, “and I think that’s what New Order, originally, were like—Bernard didn’t know how to sing—he became the frontman. I think that through learning together, we all swapped roles in a way.

“I’m glad really, now,” Gilbert says. “I can stand by this album and prove that I wasn’t the ‘wonky table leg,’ as [Hook] likes to say—I’m quite proud of what I’ve done on this album. That’s all I ever wanted to do in New Order, was be a part of this team.”

On the verge of releasing the new music, the band is hopeful. “I’d really like to see what people’s reactions are,” Gilbert says, “‘cause when you’re writing the album, you’re very unsure, especially with the new lineup.” With the pressure of new material now lifted, the group can rest easy. “We’ve done an album,” she says. “We don’t have to write two more albums, and you don’t have that pressure on you, and I think that’s quite good about being in New Order for this length of time—New Order’s still going after all these years.”