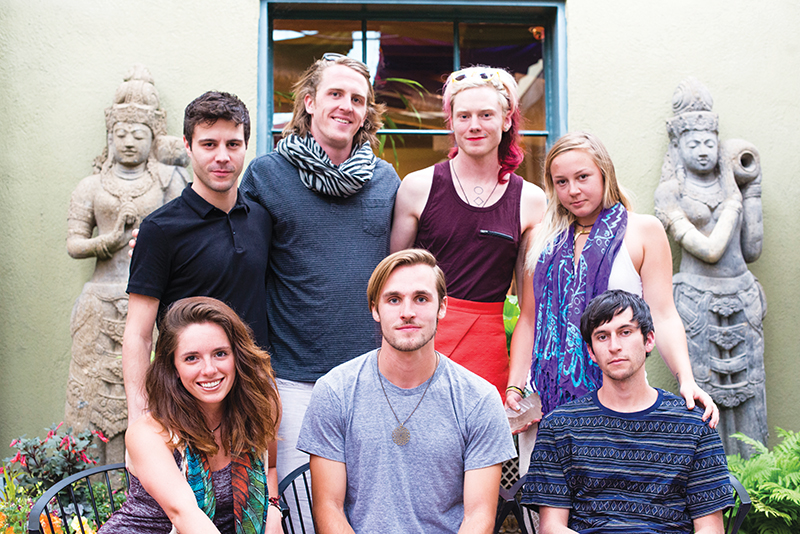 About a year ago, a friend of mine invited me to a new party at Photo Collective Studios called Deep Space, hosted by a group of friends who called themselves New World Presents—college-age burners with a vision to create a fulfilling and inspiring environment for themselves and their peers to enjoy. What I arrived at was a perfect combination of everything I wanted in an organized party: creative people coming together to present futuristic deep house paired with all-original art, intricate lighting features and a laid-back environment where yoga and techno met in the middle. Sage burned as massive dreamcatchers or glowing planets hung from the ceiling while people mingled, danced and hung out. This wasn’t a club scene anyone was used to, but people were genuinely excited about the event they were at. With local vendors, artists, musicians and proud weirdos stomping around, each New World event is more of a catalyst for creative thinking than an average night out. Now, New World is preparing for their first desert music festival to be held in early August in Beaver, Utah: Lunar Transit Festival.

After Deep Space, New World permanently moved their parties to The Fallout—a warehouse art space on 600 W. 625 S.—where they would become monthly events. The echoing but relaxed sounds of the techno and deep house that their DJs spin follow the theme of space exploration and aliens, creating a futuristic and mysterious vibe that is still mellow enough to enjoy from the couch. The parties last from 9 p.m. to 6 a.m. and cost between $10 and $15, depending on what time you arrive (the earlier the cheaper). “I think the initial spark [of the New World parties] was the weekend hitting, and us turning to each other and going, ‘There is nothing fun or cool to do this weekend—why don’t we just start our own [parties]?’” says Chad Wing, one of the production designers and DJs involved in New World. “It turned out a lot of people were waiting for something fresh like that to come around, too.”

It wasn’t just music and a refreshing environment that took New World to the level it’s reached, though—it was the sense of a radically inclusive community. “I feel like we target a lot of different people,” says Ether Stern, a contributing artist with New World who has also worked with local gender performance group The Bad Kids Collective. Each event attracts new and different people. In their “cuddle puddle,” an area of the party filled with couches and mattresses that are adorned in Balinese tapestries, you’ll see people from different social scenes mingling and dancing together. “New World is a canvas on which people project whatever they want to express creatively,” says resident visual artist and musician Jes “Crystalroes” Stobaugh. Cody “Red Spectral” Layton, another resident DJ, considers New World a sanctuary for those who don’t identify with the norms of what’s considered “sacred” in Utah. “If we’re being honest, we live in a theocracy here in Salt Lake, and I find that environments like that create a very vibrant counterculture,” he says.

Over the last few parties, New World has been bringing in musicians from around the country to perform at their shows. Bobby Ward is responsible for booking, creating visual content and securing venues and promotions, with Wing also helping to manifest the vision for what they want to present. Their last Fallout event featured the Los Angeles–based DJ Sabo, who is involved with international collectives like Robot Heart, a deep house and techno production company with large ties to events like Burning Man. “We were [initially] just kind of channeling our favorite music from these big artists, but now that we’re [also] getting the opportunity to book artists that we respect and we think people in Salt Lake should be exposed to, we’re all for it,” says Wing.

For New World’s upcoming Lunar Transit Festival—the first outdoor camping festival put on by New World, inspired by festivals like Lightning In A Bottle and Burning Man—they’re merging both local and national acts. “The music you hear [at our warehouse shows] will be a majority of what you’ll hear at [Lunar Transit],” says Wing. “We’re bringing a top-tier Funktion-One sound system, the kind you would hear at big, high-quality music festivals with great musical acts,” says Wing, who designs and builds the stage for both the parties and festival appearances. This year, the group participated in Building Man, Element-11 and, in collaboration with the Jenkstars, Electric Forest, which is held annually by Insomniac, the same group responsible for Electric Daisy Carnival.

Lunar Transit will offer activities like yoga, art and spirituality workshops, and mountain biking at the Eagle Point Resort near Beaver, Utah. Wing says, “We wanted to build the momentum in Salt Lake of getting people to come out over a weekend and learn with each other and have a real community be established rather than a six- or seven-hour party where the music is so loud, all you can really do is dance.”

The Lunar Transit Festival will be held Aug. 7–9 in Beaver, Utah, and tickets are now on sale at eventbrite.com starting at $60 for general admission and an additional $35 for camping. To find out about upcoming shows, check out newworldpresents.com or peep facebook.com/newworldpresents for information. If you’re interested in collaborating with New World, contact them at info@lunartransit.com. “If you’re passionate and want to get involved, then please do contact us,” says resident DJ Trevor “Eights Everywhere” Williams.