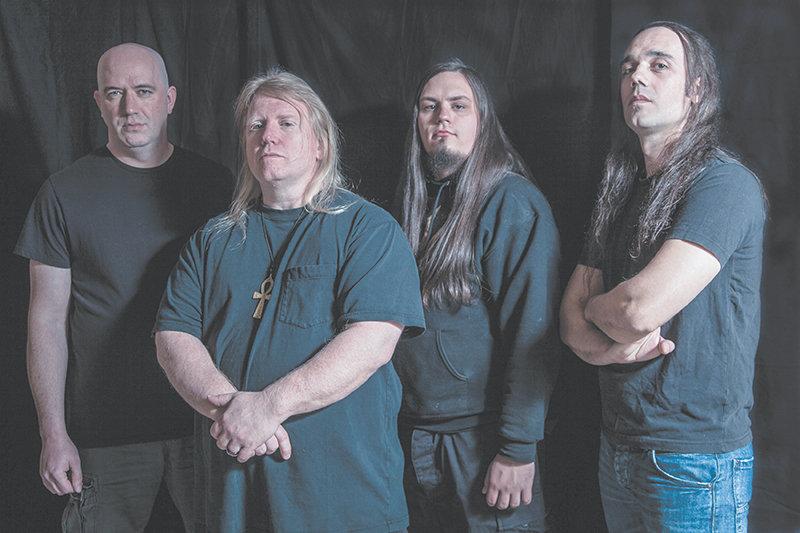 Nile: Evil to Cast Out Evil

The gods of brutality and legend have given great gifts to Salt Lake City this year by way of the whispered household names of the extreme metal underground. We’ve had the likes of Obituary, Absu, Napalm Death, Taake, Carcass, Voivod, Dragged Into Sunlight and Harm’s Way grace the stages of Salt Lake with intense live shows happening just about every month. Enter Nile, part of the Summer Slaughter Tour—a tour boasting maximum brutality—crushing The Complex in Salt Lake City on Aug. 6. The full lineup consists of headliner Cannibal Corpse with Nile, After the Burial, Suffocation, Carnifex, Revocation, Krisiun, Slaughter to Prevail and Ingested. As the sole original member of Nile, Karl Sanders possesses in-depth knowledge about the band and what to expect for the upcoming show.

“People are going to be talking about this tour for a while,” says Sanders. “What does Nile bring that anybody else doesn’t bring? I mean, we’re Nile, and I think that’s enough right there, because certainly you’re not going to out-brutal Cannibal Corpse, Suffocation and Krisiun … All of [the bands on the tour] have different identities.”

Nile hit it big with their first full-length album, Amongst the Catacombs of Nephren-Ka. Nephren-Ka is actually part of the H.P. Lovecraft story, The Haunter of the Dark. One of the things that makes Nile so unique is their lyrical content, which draws from Egyptian mythos, true and fictional. Nobody else sounds like Nile. At its core, the band is death metal—technical yet brutal—steeped in atmosphere, by way of the nontraditional elements that Sanders uses, like the Baglama Saz from Turkey, a long-necked lute, and the Godin Glissentar, a fretless, 11-string guitar rooted to a seventh century instrument called the Oud. Sanders also provides a differing vocal approach: He performs more guttural vocals while the main vocalist executes the death metal growl and scowl, often enunciating enough to be able to discern what the band vocalizes.

“I think having your own identity is a precious thing,” says Sanders. “It’s something to hold onto and cherish: We sound like Nile. We don’t sound like somebody else. That’s the essence of an identity, and identity is everything.” The early stages of Nile had a more thrash approach, which Sanders describes as a natural progression to death metal. It took some time for Sanders, but his learning to play at more extreme tempos helped get the band to their current sound.

Adding to the unique sound of Nile is a distinctive guitar tone; it’s crunchy and heavy, but it has a grit to it—kind of like how power-sanding concrete would sound. I asked Sanders about his setup to get his tone, and he said that it’s the same setup to achieve the tones for every record. “A solid-body V-type guitar (usually Dean) with a Seymour Duncan Invader Pickup into a Motu-type Drive into a Marshal Amp,” he says, also mentioning that in the early days of Nile, he used Middle Eastern–style instruments live but wore himself out. At times, he’d play the other instruments with his feet. Now, instead of moving more gear around, Sanders uses a laptop, mainly for economic reasons.

Nile’s use of Middle East–style instruments, in conjunction with Egyptian mythos, sets up intense atmospheres on every album—it helps lend each album a mysterious and often magical or mystical tone. With the band’s newest record, What Should Not Be Unearthed, the tone is highly ominous and dark. The album is a mix of heavier death metal tracks dispersed with slower, almost dreadful songs. With regard to the album, Sanders says, “It kind of links to something if archaeologists dug up something that was so fucking terrible and mind-blowing that it just fucked people up. The times we live in now, things don’t really surprise anyone anymore—UFOs, so what? Nobody cares about anything because we’ve all seen everything. We’ve got information overload.”

There is a climate of turmoil in extreme metal and the world in general where political protests, involving both the far left and far right, often erupt in violence. This spring, Sanders was involved in an incident in a Russian airport (it’s captured on YouTube), where a religious group of protesters tried to instigate a fight with Sanders and members of Belphegor. Restraint from both bands made the protesters fail. It brought up a memory of a time when I saw the band live and an inebriated concertgoer wanted to pick a fight with Sanders, which he ignored, shredding on. I asked if Sanders was the death metal peacemaker. “I’m certainly no angel,” he says. “If there is a troublemaker and he’s trying to make trouble with me, I put an end to it one way or another—sometimes it’s pretty, and sometimes, it ain’t so pretty.”

While the Summer Slaughter Tour offers up a heft of brutal bands, Nile definitely stand out from the pack with their lyrical approach and distinct guitar tone. Yes, Nile have songs that will feel like you’re crushed under a massive weight, but they have songs that seem mystical and magical, just like their lyrics. See Nile with the Summer Slaughter Tour Aug. 6 at The Complex in Salt Lake City.