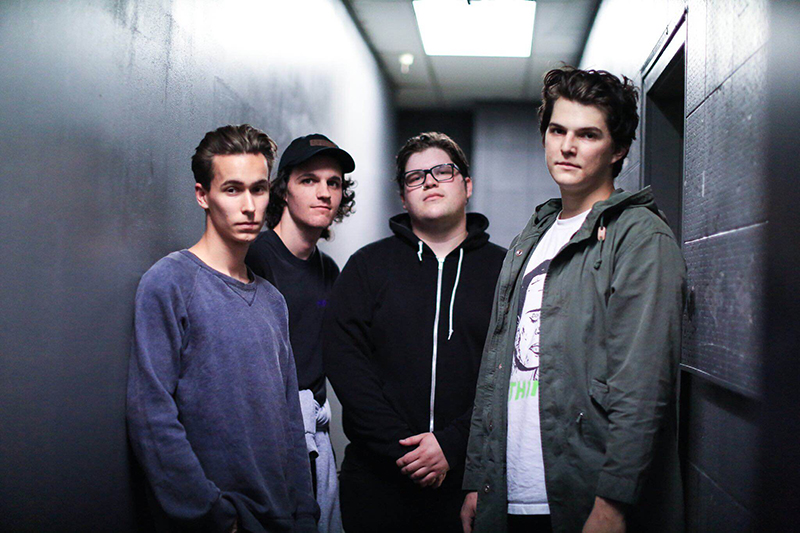 Just in time for winter’s dropping temperatures, Salt Lake’s No Sun are set to release Warm, an EP of lush, atmospheric shoegaze. The three-track EP, which the band will be releasing on cassette Dec. 5 at Diabolical Records, swells with walls of reverb and texture, walls that are densely built yet blanketed with subtle graces—everything requisite of beautiful, dreamy shoegaze. Jordon Strang, the group’s vocalist/guitarist, took time to look up from the pedalboard to talk about the release.

SLUG: How did you guys come together as No Sun, and how have you grown since the band’s inception?

Jordon Strang: We started in the winter of 2015. I had originally began this as an acoustic side-project sort of thing. We recorded some rough songs on GarageBand on our phones, and after posting them, we started to gain a bit of momentum in the area. We became a full band shortly after and did a tour of the Northwest with our friends in Sights. At the time, we were more straightforward and a bit poppier. After a couple of member changes occurred, our musical direction changed pretty drastically. I feel like, at first, the fans of our old stuff came out to our shows and were kind of just confused and didn’t know what to make of the new sound. We’re starting to gain momentum in our local scene again, though, which is great. As a band, we’ve grown in the sense that everyone is on the same page with the direction we want to go in, and we all believe in it with equal intensity. I feel like I’ve grown a lot as a musician since No Sun began. I owe a lot of that to my bandmates.

SLUG: You’re releasing your second EP, Warm, with Don’t Look Down Records. How did you guys connect with them?

Strang: Don’t Look Down Records is a small scale DIY label based out of San Fransisco. I came across them by finding a band on their roster called Brown Bags. I was really hooked on their EP, so I ordered a 7” from the band. The packaging and value of the physical production was immaculate. I quickly looked up the label to familiarize myself with them, and when the time came almost a year later, we asked them to do our EP. They’ve been great. Our bassist Tyler and I both come from hardcore punk backgrounds, and I know I wanted to approach working with a label with that same mentality I have carried in previous hardcore bands I’ve played in. It was nice to meet people with similar DIY ethics as us. They’ve been great.

SLUG: Warm’s opening track, “Ache,” reverberates with elements of classic ’90s shoegaze, while “Erase” hints at subliminal influences within its blankets of warm sonic bliss. What are the inspirations behind your interest in creating shoegaze music?

Strang: For me personally, I’ve always loved the dreamy, atmospheric, at times romantic-sounding aspects of shoegaze. Slowdive and Cocteau Twins, for example, have been known for their incredibly large and lush soundscapes. Whereas our other guitarist, Ben, is a natural at creating the huge, noise-y, wall-of-sound riffs you’d find on a My Bloody Valentine record. I think, essentially, shoegaze appeals to me because I want to create music that has the potential to become timeless, and what I find to be timeless pieces are often the more emotional, atmospheric and vibe-y artists out there. With that said, we definitely do a take a lot of influence from the OG ’90s shoegazers, but we also try to put our own spin on things.

SLUG: You recorded Warm at Soundcave Studios with Andrew Goldring. What was the process of recording your sound in a studio setting like? I assume that there are lots of pedals involved.

Strang: Working with Andrew is always an incredible experience. He has a lot to offer the music community in SLC. He was easy to work with and had a really down to earth approach when tracking our EP with us. As far as pedal usage goes, we really just used our regular assortment that [we use] live.

SLUG: Who among you tackles songwriting? Is it a collaborative affair or more piecemeal?

Strang: It’s definitely collaborative. Usually, Ben and I will sit down together and throw some ideas back and forth, and then approach the rest of the band once it’s a bit more organized. From there, we generally tend to formulate the overall structure.

SLUG: Shoegaze is often a difficult genre to recreate live, but you guys seem to have that on lock. What’s your approach to recreating your sound in a live setting? Do you prefer either format, or do they exist as two separate spheres for you?

Strang: I feel like the only real thing that separates our live and studio sounds are volume. When we play live, we try to make a thick, textural wall of sound. Ben and I tend to play with full stacks most of the time, and though some people that come to our shows don’t like it, we’d like to think that having that experience in a live setting helps to complement the fuzz, delay and reverb we use by making it that much spacier.

SLUG: How has Utah’s music scene influenced you guys, both as a band and individually?

Strang: Salt Lake City’s music scene is in many ways a hidden gem. You never hear of people talking about SLC as a music hub, yet there are so many incredibly talented local bands, and such a wide variety at that. From metal greats like Cult Leader, The Ditch And The Delta, SubRosa and Despite Despair, all the way to great indie/rock bands like Great Interstate, Chalk, Fossil Arms, and The Circulars, to name a few. I find influence from many of my peers, but what inspires me the most are the Utah bands that are actively touring and putting our scene on the map. That’s a very cool thing.

SLUG: What has No Sun’s reception in the local music scene been like?

Strang: It seems to be pretty positive so far. We’ve been getting a lot of feedback from the new songs we’ve streamed so far, which feels really great. For the longest time, we were playing shows sounding like one thing while everything on our Bandcamp was totally different from what we were live. It made it hard for us to grow.

SLUG: Rumor has it that you have a full-length debut in the wings. Wanna drop any hints as to what we can expect from it? When will it be out?

Strang: The LP won’t be out until later next year. You can hear hints of what is to come when listening to the EP. There’s going to be a bit of something for everyone.

SLUG: What can readers expect from your EP release show?