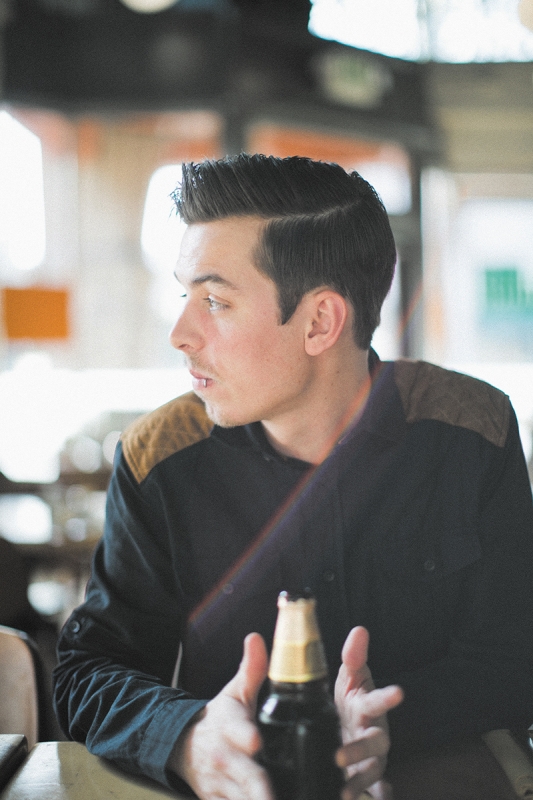 Nothing Is Too Big: An Interview With Grieves

Grieves is pale, skinny and unapologetic. He is aware that he draws comparisons to Macklemore. He pays no attention to what assumptions Pitchfork makes about the originality of his rap or how many stars they slap on his album. This could come across as cockiness, but the truth is that his rhymes are rooted in soil too deep to be bothered by shallow judgments—hip-hop is as much about letting go as it is pushing forward. If you made resolutions for 2015, keep this in mind: In the course of one year, Grieves went from booking shows on MySpace, at which he would play for mostly empty rooms, to dropping an album with his dream label and spending weeks on tour with Atmosphere. While any combination of luck, talent or alchemy may have had a part in this, it’s clear that his hustle was the knock that led to an open door. Salt Lake happens to be one of the few stops on an upcoming tour—on Feb. 20—and it also just so happens that his guitar player, Jonathan Olivares, is an 801 local.

“I quit my job in 2007, and I haven’t been doing anything except music since,” says Grieves. When he got the opportunity to tour with Rhymesayers, he printed 10,000 demo CDs of Irreversible that he definitely couldn’t afford and started handing them out everywhere he played. He knew that a good amount of them would end up being tossed in parking lots, but he also knew that meeting 10,000 people—whether they liked his music or not—was good practice. His foresight paid off, as iTunes sales exploded, and he began to pick up popularity and traction. “The music that Atmosphere and all the Rhymesayer guys put out was a major inspiration in the way that I was trying to build my business,” he says. “It definitely inspired me to do more than just write music or write lyrics, but to do something with it.”

The frigid imagery evoked by his newest release, Winter & The Wolves, is no accident. “It’s a very survival industry,” Grieves says. “You’ve got to earn your keep, and it’s a pretty brutal place to be sometimes.” In the three-year gap since his last full-length album, he’s learned to embrace the vulnerability of being in a delicate position of success in a competitive industry. After struggling through years of trying to contribute quality work and rise to the top of his local Seattle scene, Grieves now faces the new and intimidating realm of being an online presence, and, believe it or not, he sometimes reads the comments. “Unfortunately, sometimes I do see what you say about me on YouTube, but it’s those things that are trying to harm you or kill you that show you how to live better, and that’s the purpose of the record,” he says. “I’ve learned so much from how hard this is, and it’s allowed me to do greater and kinder and better things.”

As far as doing better things, Grieves is certainly putting in the effort to elevate himself both emotionally and technically as a musician. He began working with new producer B. Lewis for Winter & The Wolves, and the two developed a relationship that allows them to push each other creatively and to craft songs that come from a place of both thoughtfulness and spontaneity. “Working with a producer is a really cool and powerful way to bring the music out of you in new ways,” says Grieves. There is a sense of maturity in his latest work that sets it apart from his past. Naturally, he was more educated on the process of making a full-length album the second time around and had a better idea of how to make it sound the way he wanted. In addition to his growth with sound, Grieves seems to internalize both the good and the bad, allowing himself to write music that, if nothing else, comes from a place that is real. “Music is and always will be open to interpretation, and that is the beautiful part about it,” he says.

In preparing for the coming year at the time of this interview, Grieves was looking forward to a brief recuperation before heading out on a small tour, recording in his studio, collaborating and letting the pen do the talking. In a sincere tone of voice, he says, “Nothing is too big. The fact is, the second you put a limit on something is when it becomes unreachable to you.” Perhaps this is the mindset one needs to gain fame and fortune, though it seems that Grieves’ intentions are more pure than simply selling songs. He speaks highly of his personal hip-hop community and hopes to contribute as much as possible to his local scene—and he encourages anyone looking to make a mark in music to do the same. “Take some fucking risks,” he says. “Feel what it’s like to lose a little bit. Go out and play in front of a real crowd for people who aren’t your friends and coworkers, and be inspired by that. It will drive you, or at least help show you a different path.” Don’t miss the shameless and undeniably infectious Grieves when he plays Feb. 20 at The Complex.