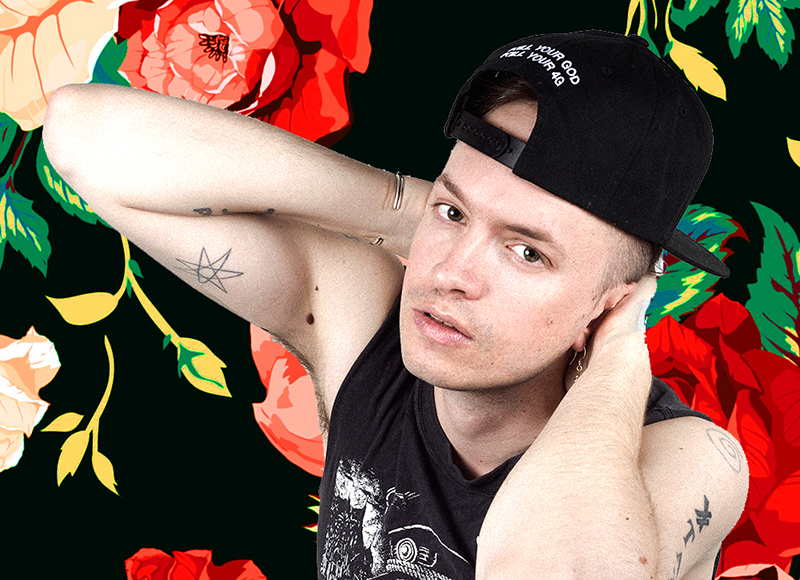 Brooklyn-based electronic artist Pictureplane wants you to rave to the buzz of your own technology. His latest album, Technomancer, which dropped Oct. 30 on Anticon, will incite you to an EBM riot, though its glitzy combination of ’80s and ’90s fringe aesthetics and alter-reality-bending synth riffs will soothe your newfound existence in a pleasing cocoon of electronic synthpop. Risking a rift in our own technological reality, SLUG caught up with Pictureplane before his performance with HEALTH at The Complex on Dec. 4.

SLUG: Technomancer is a sort of punny misnomer. It isn’t “techno” as much as it is a chaos ritual of poetic anarchy. What kinds of ideas influenced you during the making of this album, and what do you hope the album accomplishes?

Pictureplane: The “techno” in the word technomancer doesn’t have anything to do with techno music. It has to do with technology and magic, specifically someone who uses technology for magical purposes. Although I wasn’t thinking about it much while making it, I think this album is really influenced by New York City and the type of anxieties that are a fact of life living there. The album touches on a lot of ideas about our current relationship with machines and tech, how we are being transformed by technology. I was trying to find the humanity inside of technology.

SLUG: Technomancer also sonically complements your previous album, Thee Physical—there’s a recurring “Pictureplane” sound. Musically speaking, what kinds of new musical territory are you exploring on Technomancer? How has your affiliation with Anticon, who released the record, affected your musical philosophy?

Pictureplane: I produced this album the same way as my last few albums—I just had some new synthesizers that I didn’t have on my previous albums. This record is heavily influenced by industrial music and ’80s EBM and darkwave/minimal wave. I wanted to combine that type of sound with hip-hop influences and make a sort of industrial hip-hop type of sound. My “affiliation” with Anticon started long before this album. I have been an intense fan of that label since I was a teenager. Anticon changed my life forever when I was like 15. Those records have been a lifelong influence and inspiration to me, so it is really wild to be working with them now.

SLUG: So much of your work, from your music to your art to Alien Body seeks to switch passive consumers into magickally aware chaos radicals. Do you have any chaos rituals yourself, or any tips for initiating ontological anarchy?

Pictureplane: Thank you, I am glad you can recognize that. A big part of what I do is to try and stimulate awareness in people. I don’t have any specific rituals that I do, no …

SLUG: You grew up in Sante Fe and were a fixture of the DIY venue Rhinoceropolis in Denver for a time. There’s a similar DIY punk attitude that Salt Lake shares with those Western sister cities, as all of them are somewhat isolated to varying degrees. How did living in those places inform your cultural upbringing? Did the Internet offset any isolation felt?

Pictureplane: Yes, I think growing up in places that are more isolated, it creates a really wonderful community of people who are just simply creating, [and] I think it is really pure. Denver really had its own style and its own thing going on when I was living there. It has its own history and its own way of doing things because it is so far away from any other city. And yes, the Internet was a huge part of helping these DIY communities. You could make friends with artists and musicians all over the country and book tours that way, seeing other like-minded individuals basically just from how their MySpace page looked. It’s very different now on Facebook. There is no individuality.

SLUG: Around the time of Thee Physical’s release, it seemed as though post-Internet/witch house/#seapunk were true subversive subcultures and Internet technology was a possibility space. Do you feel like the Internet is still an autonomous zone, or are the windows of autonomy getting smaller and smaller as big interests take over and the Internet’s accessibility becomes habitualized?

SLUG: Where do you feel like the subversive energy of the Internet and modern technology is headed?

Catch Pictureplane with noise-rockers HEALTH at The Complex today, Dec. 4.