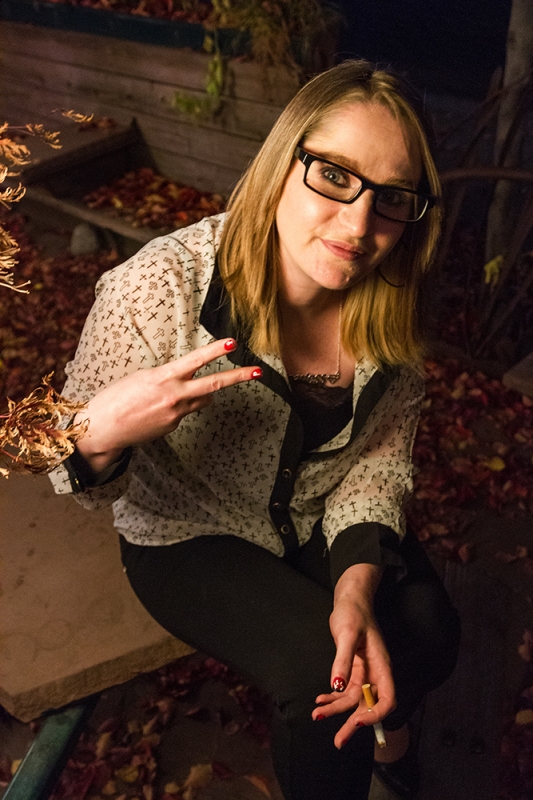 Oddescee spits out vicious rhymes as a self-proclaimed “nerd” and hip-hop battle emcee.

Upon meeting Brandi Madrid, aka Oddescee, for the first time, you wouldn’t think you’re talking to Salt Lake’s one and only female battle emcee. In fact, the incredibly humble and down-to-earth mother of two is a self-proclaimed introvert and nerd—she proves it to me by proudly displaying the “NERD” tattoo on her back and telling me about her passion for books and the show Ancient Aliens. Her necklace, however, speaks of the woman that lies beneath: “Fearless,” it says.
Born in Utah, Oddescee developed a passion for hip hop from her older brother, Tommy, who would spin N.W.A and Dr. Dre. “For me, hip-hop is a lifestyle. It just is. I dream it—I breathe it,” she says. Drawing her true hip-hop inspiration from the now-deceased Lisa “Left Eye” Lopes of TLC, Oddescee began writing at the age of 12 as a form of therapy that soon became a compulsion, she says—a way of bleeding her pain and anxiety onto paper. “After hearing Left Eye, that’s when I was like, ‘I can do this,’” she says. Oddescee takes on a real-world approach to writing, with no pretense or misrepresentation. “I don’t write about money I don’t have and cars I don’t drive. I write about things I know, things I’ve lived through,” she says.
After moving to New York at the age of 14, Oddescee was quite literally pulled into the freestyle battle scene off her stoop, with “hip-hop around every corner.” This aided her in overcoming her shy and self-conscious nature, as she was thrown into the sink-or-swim freestyle cyphers. Oddescee moved back to Utah in 2000 to find the Salt Lake hip-hop battle scene to be poppin’—much larger than she expected, and probably larger than any of us realize. “[The Salt Lake scene is] close to the scene in New York,” she says. “There’s a lot of new talent, and a lot of people do it.”
Oddescee’s preference and comfort zone is freestyle battle or topic freestyle battle, where the audience yells out topics for the emcees to include in their round. “I think my topics [at the last battle] were a grumpy cat, a penguin and a top hat,” she says. However, since battling within the Utah chapter of AHAT (All Hip Hop All The Time), Oddescee has had to get her feet wet in the world of written battles, where the opponents have several days to write, prepare and practice their battle material. Written battles do present their own set of obstacles, Oddescee says—forgetting your rhymes being the worst one. Each opponent is presented with three rounds of 90 seconds with which to slam their fellow emcee. Oddescee says, “Sometimes you say random stuff, but it gets a reaction out of the crowd, which is what you want.” Including but not limited to: “I’ll put a hollow clip to this hollow clit and blow out her cervix/Call it a public service”—lyrics from a recent battle versus Vegas emcee Vicki Myers. She goes on to tell me of her last opponent and good friend, Big Al, rhyming that her nipples look like poppy seeds. “You have to know not to take it to heart—part of battling is to put on a good show. Sometimes you have to say some mean shit,” she says. Water under the bridge is the name of the game afterward, and maintaining a level of professionalism and knowing that it’s all part of the job helps Oddescee get over some of the sexist and vulgar rhymes with which she is often slammed back.
AHAT was formed in California and spreads throughout the West, including Las Vegas, New Mexico, Utah and Texas. The Utah chapter was founded and funded by Nicholas Fonseca and often turns out up to 300 attendees. Oddescee encourages anyone who is interested in signing up or just checking out a battle to visit the organization’s website, ahat.tv, or to check out their YouTube channel, youtube.com/user/allhiphopallthetime.
Oddescee hopes to be an inspiration to young women and empower them to come out and exercise their passion for hip-hop emceeing, partially because she is the only female battle emcee in the state, but mostly because rapping and writing have helped her deal with so many hurdles in life and continue to be a form of therapy for her. She was super stoked the day her 10-year-old daughter, Akaisia, spat out her first rhyme, and hopes her daughter will follow in her mother’s musical footsteps, though she doesn’t share the more vulgar battles with her children.
In addition to battling, constantly writing and being surrounded and supported by amazing friends, Oddescee is currently working on recording an album with producer Krem, with a tentative release date of summer 2014, which will include some passionate work by this amazing rapper. I fortunately got a private show of some of her personal work and highly recommend you check out and support Utah’s only female battle emcee to date, Oddescee.