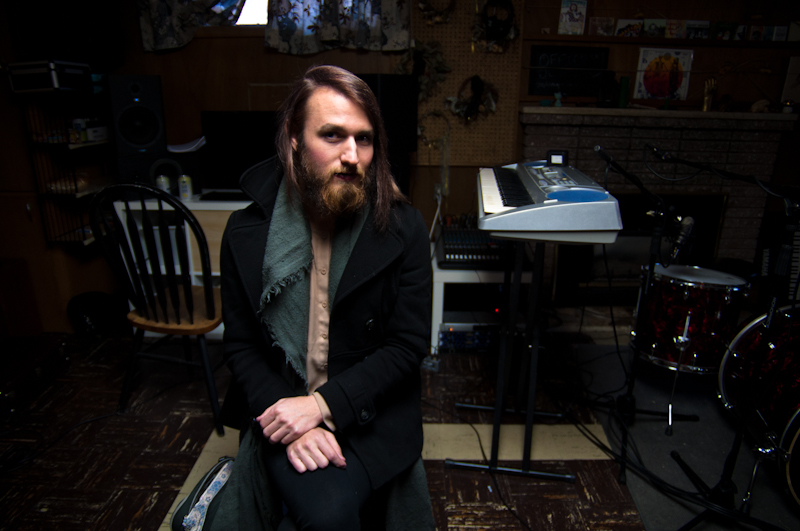 Officer Jenny: Offering a Voice to the Voiceless

Stephen Cope’s Officer Jenny project sheds light into the darkest corners, zooming in on the most repulsive details in one of 2015’s best records, ~*queen of cups*~. The album’s opening track, “Father Doted Over Me,” pulls no punches and aims straight at the heart of the matter, and the matter of the heart is broken, shattered: “He turned my eyes / Black and blue / Then he said / ‘I love you child, / But my love’s not free.’” The contrast, however, between the lyrics and the music that swirls mystically around them creates a puzzling feeling. Tender harmonies soar over Cope, who utters words about a father playing his child’s back “like drums.” Chamber music–like orchestration with light banjo and keyboard swells generate a pattern of childlike colors. The disposition is sunny—the subject matter is anything but.

Child abuse is a difficult subject to breach in lyrical form, as it requires careful handling of fragile souls attempting to find a voice strong enough to contend with it. Putting trauma into words is no easy endeavor. Songs speaking of child abuse vicariously through voiceless characters, such as Suzanne Vega’s “Luka” or The Smith’s “Reel Around the Fountain,” tend to insinuate the degree of abuse endured by them, rarely illustrating the miserable details of the poor children’s experiences. “I wanted to paint a picture that was graphic, but color it in a way that a child would,” Cope says. “It had to be authentic, and I tried to pull that off.”

Out of necessity, Cope established a basement studio to record other local acts as a means to support themselves, called Studio Studio Dada. Slowly they began to collect vintage instruments, like a one-of-a-kind Hammond keyboard. In contrast, Cope uses more modern means, capturing the vintage sounds of exotic instruments, especially string instruments and brass horns. Their digital audio workstation of choice, Reaper, allowed Officer Jenny to enhance their vintage instrumentation. “After attending BYU for a short time, I decided it was time for me to make some money, and Studio Dada became the place where ~*queen of cups*~ was written,” says Cope.

Studio Studio Dada also behaves like a concert hall. Rows of benches like church pews rest at an angle, providing Cope’s friends a place to come and watch other Provo acts perform. Cope, on the other hand, has performed ~*queen of cups*~ just once in its entirety. When asked why Officer Jenny don’t perform songs from their record, their response further reveals more about their struggle to find a distinct musical identity.

“The songs are too hard to perform for two reasons. First, I struggle to sing the vocals on that record live. Even recording them forced me out of my comfortable range. Second, it is hard to play a song like ‘Pull Me Over, Jesus’ and follow it with ‘Nothing Feels Real,’” Cope says. “The song ‘Pull Me Over, Jesus’’ (from Officer Jenny’s Some Home Recordings–a collection of demos) is sarcastic and funny, whereas ‘Nothing Feels Real’ talks about meta-modern concerns about life’s meaning. They just don’t go together.”

The delicately plucked acoustic intro to “Nothing Feels Real” sets the tone for the song’s deepening existential crisis. The lyric “I can’t feel nothing with my eyes closed” captures how purpose and pleasure cannot exist mutually. Moreover, Cope discusses the effects of their own abuse and shame. Cope is gender-neutral, meaning that they neither identify as male or female. Their gender-neutral identification surfaced during a crisis of faith.

“I just came back from serving my mission in Cambodia, and I had some real problems about serving it,” Cope says. “Even though I still sometimes go to church, mainly because there isn’t much to do on Sundays, I have finally moved past my issues with my [former] faith.” Cope’s appearance embodies the philosophy surrounding the concept of gender neutrality. Cosmetics and skirts balance with flashes of men’s apparel. Cope wears these articles with unwavering confidence. Under any gender classification, it is next to impossible to find anyone with the same firm resolve.

The LDS Church’s recent addition to membership rules concerning same-sex couples and their children reinforces Cope’s faith-based disillusionment. One of the most heartrending tracks on ~*queen of cups*~, “They Told Me Death Is Not the End,” laments how the doctrinal faith is not a friend to the marginalized group they belong to. The horns play like a dirge of disgust—mournful yet unsurprised.

Saying things that need to be said drives ~*queen of cups*~. The price is a physical and spiritual catharsis. This helps to explain why Officer Jenny do not need to perform ~*queen of cups*~ night in and night out.

“I have moved on from my faith, and this album helped me to do it along the way,” says Cope. “I have made my peace, so now I can move on to writing other songs about topics that I need to address.” You can reach out to Officer Jenny on their website or via their facebook page for upcoming show dates and news from the band.