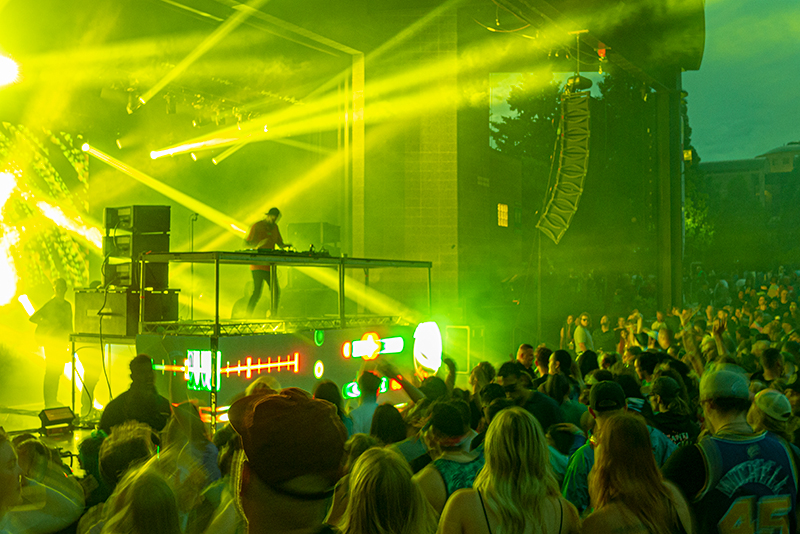 For five years, Jared Allen, owner of the Ogden bar Alleged and co-creator of the Ogden Twilight: Summer Concert Series, has risked failure and financial loss to put his city on the map. What started as an idea during a conversation over drinks with friends grew into a series of concerts bigger than Allen could have imagined. By bringing nationally known acts such as The Flaming Lips, Sylvan Esso and The National to the beautiful Ogden Amphitheater to celebrate music and the outdoors, a new light shines on a Utah city that is generally overlooked, according to Allen.

Allen says that the idea of having a concert series in Ogden started as a dream at first, but over time, he and Christi McBride from Ogden City realized that their dream could quickly become a reality. “It just kind of began as a random conversation between friends that were having drinks one night, and we thought we might as well go ahead and try it, ” Allen says.

Allen was born and raised in Brigham City, a small town just north of Ogden. He left the state of Utah when he was a young adult, but says he missed the beauty the state had to offer. Allen lived in the Denver area for several years and went to many shows at Red Rocks Amphitheater. When he moved back to Utah, Allen saw that the Ogden Amphitheater was being underused.

“Red Rocks is gorgeous and I love the shows they put on there,” says Allen. “But the Ogden Amphitheater is also fantastic and super beautiful, and we thought more people should come and experience it and what it has to offer.”

“We wanted people to see how cool Ogden’s become.”

Nestled in the heart of Ogden and with a capacity to hold thousands of people, Allen says the Amphitheater seemed like a perfect venue for the new concert series he and McBride were creating. Not only was the Amphitheater big enough, but Allen felt it was a perfect place to introduce people to the city of Ogden who may have never spent time there before. One of Allen’s and McBride’s main goals was to get people from the Salt Lake City area to come up to Ogden and change the pre-conceived notions Utahns have of what Ogden is.

Working with other local leaders and the City of Ogden, Allen and McBride were able to get the concert series up and running. “The city’s been so great to work with,” says Allen. “We have been able to maintain 100 percent creative control. No one has told us once ‘you can’t book an artist,’ or ‘you need to book this artist.’”

“We learn things every year, and we just want to work to make it better.”

Allen is grateful that Ogden’s leaders have been so accepting of the event, and have worked with the organizers of Twilight to make it what it is today. With creative control comes financial responsibility, a fact that is not easily lost upon Allen. After trying to get bigger artists to play, and after seeing that there would be more of a risk financially, Allen and the organizers of the Twilight event stepped in with their own money to see things through.

“In year four, we started to get some opportunities from bigger artists, and even though they’re bigger artists in my eyes, if you try to explain that to business people, they’re like, ‘I’ve never heard of the Flaming Lips,’ or ‘I’ve never heard of Sylvan Esso,’” Allen says. “The risks, monetarily, kept getting bigger and bigger, so we kind of stepped in and took back over the financial liability to be able to keep it growing and keep bringing these bigger artists.”

With that financial liability comes a little more pressure and fear, especially in areas that are uncontrollable. “You can’t control the weather, and that can be scary,” says Allen. “If it looks like it’s going to storm, half your crowd may not come, and you’ll end up upside down on the night.” Still, despite the risks, Allen doesn’t see the concert series going anywhere anytime soon.

“What we’ve settled into this year is very comfortable for us, and we have a pretty big date window of June through September,” says Allen. “We learn things every year, and we just want to work to make it better.”