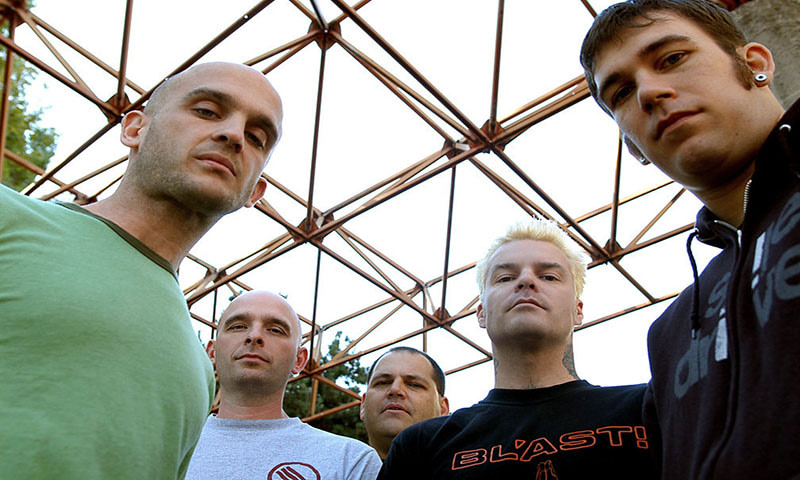 As American as It Gets:

An Interview with Only Crime.

The last time I spoke to Russ Rankin, he had successfully turned a goof-off band formed in 1987 to the political powerhouse known as Good Riddance. They had just released Symptoms of a Leveling Spirit, a hard-hitting musical diatribe containing all the necessary punk elements: anger, politics and fun.

However, a stick was thrown into the music machine in late 2001 when Good Riddance guitarist Luke Pabich decided to attend college full time and bassist Chuck Platt as well as drummer Dave Wagenschutz began to search for full-time employment. Although Good Riddance still exists today, the momentum of the band slowed. Rankin had time on his hands, and in the summer of 2002, he began laying out plans for another full-time band with Aaron Dalbec of Bane.

The result was Only Crime, a decidedly dark and brooding outfit featuring Rankin on vocals, Zach Blair (Hagfish, Gwar) and Dalbec on guitar, Bill Stevenson (Descendents, All, Black Flag) on drums and Doni Blair on bass. You aren’t going to find Only Crime playing the 80s cover songs that Good Riddance sprinkles throughout their albums. Only Crime’s mission is purely to seek and destroy. Their debut full-length on Fat Wreck Chords, To the Nines, is a malicious mix of hardcore beats, ear-splitting guitar and Rankin’s doomsday prophecies.

“All five of us get on stage with the intent to cause harm,” Rankin said. “There’s some ill will in the music. The music has a wake to it, like a menace to it that I don’t think Good Riddance has.”

Some of Rankin’s poison screams are aimed toward the American government that has let him down. Although he certainly carries a large amount of disdain for the current administration, he’s not going to align himself with the “anybody but Bush” camp. He refers to Democratic candidate John Kerry as “Bush Lite” and will be casting his vote with Green Party candidate David Cobb.

“To me, voting for Kerry just because he’s not Bush is short sighted and it’s cutting off your nose to spite your face,” he said. “If that’s what people do and if Bush gets reelected, then we deserve it. We deserve four more years of him.”

“Some people say that a stance like mine is un-American and I disagree and say that’s as American as it gets,” Rankin said. “I think that America can do a lot better.”

Rankin explained how the media does their part to push candidates who aren’t Democrat or Republican out of sight. He watched the Green Party convention from Milwaukee at 1a.m. on CSPAN while the fat-asses and the jackasses got prime time.

“Here in America, the media is complicit in painting a picture of the whole electoral system that basically tells us we have two choices, which is false,” he explained. “And the average citizen goes to the polls and looks at the ballot and goes ‘Who are these other people? I didn’t know they were running for president.’ At the end of the day, democracy isn’t served, but the interests of power and the richest one percent of this country are stoked because nothing will change for them. I think John Kerry’s almost as full of shit as George Bush is.”

The political views and the crushing sound of Only Crime bring back a sweet, burning nostalgia for days when punk meant more than a bondage belt and some black hair dye. Rankin doesn’t like to think about what happened to punk rock, but he recognizes that his two bands wouldn’t be as successful if it weren’t for the exploitation of the music he grew up with.

According to Rankin, punk’s salvation will come when it’s dead in the mainstream’s eyes.

“If you look at the history of the culture industry, they latch onto some kind of music, claim that they discovered it, bleed it dry of anything that once made it remotely cool, and then throw it away,” he said. “And that’s when I’ll be happy because then we can go back to being how we were.”

With Only Crime, Rankin will be sure to fight the good fight and make punk and hardcore as unpalatable as possible to those who would exploit it. To the Nines hit stores July 13. Only Crime’s mission is, after all, to seek and destroy; and that’s as American as it gets.