Last year, director Jeff Broadway released a documentary called Our Vinyl Weighs A Ton: This is Stones Throw. Having received a lot of positive feedback at festivals, the film is going on a North American tour this year, stopping at SXSW.

Our Vinyl Weighs a Ton: An Interview with Stones Throw Peanut Butter Wolf 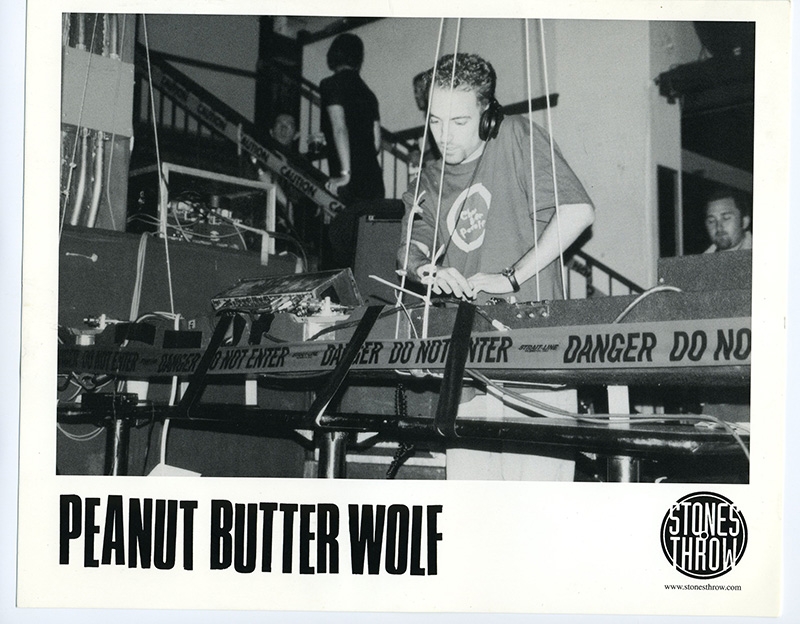 Having grown up in Utah listening to mainstream rap like 2Pac and Notorious B.IG., I never knew about underground hip-hop. Then I met my half brother Coleman Twitchell. He introduced me to lesser-known talents like Jurassic 5, all the way to up-and-comers like Mobb Deep and the Wu Tang Clan. I can remember him having a 50 Cent song on a CD mix long before Eminem brought 50 to the top of the mainstream rap game. Being intrigued by music that didn’t sound radio friendly, I went on to discover indie artists like Sage Francis and Atmosphere. One day at The Record Exchange in Boise, Idaho, I stumbled upon the Quasimoto album, The Unseen. Intrigued by the name and album art, I purchased the CD. It was the strangest piece of music I had heard up to that point in my life. Full of jazz loops and sampled bits from Melvin Van Peebles films, it opened my mind to artistic freedom in hip-hop on a whole new level. Quasimoto is the “bad character” alias of hailed hip-hop Stones Throw producer, Madlib. I loved the album, and that was my introduction to the Stones Throw label.

Last year, director Jeff Broadway released a documentary called Our Vinyl Weighs A Ton: This is Stones Throw. Having received a lot of positive feedback at festivals, the film is going on a North American tour this year, stopping at SXSW. Our Vinyl… is a fantastic look into the “left of center” minds that represent the Los Angeles–based music label, which was founded by Chris Manak, a.k.a. Peanut Butter Wolf, in 1996. The film is an insightful look into the history of Stones Throw and the artists who made it what it is, such as Madlib, and divulges interesting details, like Quasimoto’s The Unseen being the result of a binge on mushrooms. The film also left me with some questions. Luckily, I was able to correspond with Peanut Butter Wolf over e-mail to have a few of them answered.

SLUG: Now that it’s finished, what do you think of the film? Did it meet your expectations?
Peanut Butter Wolf: I liked the film overall. It’s always hard to have a film where a bunch of people say a lot of nice things about you, but I guess I don’t need to have a funeral now. The hardest thing was to try to fit 17 years into 90 minutes, but the guys did as good of a job as one could do with that.

SLUG: Charizma is the inspiration behind Stones Throw. How does his spirit contribute to the label and whom it takes on?
Peanut Butter Wolf: I seem to be answering that question a lot these days. He and I were quirky, to-the-left, hip hop, and Stones Throw is a quirky, to-the-left record label that has a weird and sometimes dark sense of humor. When Charizma’s mom first called to tell me he died, she gave me the job to tell his girlfriend Marie the news. When I did, she thought it was a practical joke because Charizma and I had a warped sense of humor, and I bring that today to the label.

SLUG: I was surprised by Kanye West’s appearance in the film. How were the interviewed artists chosen?
Peanut Butter Wolf: I suggested a lot of people (like my childhood friend Steve AKA Baron Zen) and Jeff did as well. Kanye is not one I would’ve chosen. Not because I don’t think he’s related to Stones Throw, but more because I’d have sworn he would never do it. I still don’t know how Jeff pulled that one off.

SLUG: Aloe Blacc declined to be interviewed for the film, yet he’s sold the most records than any other artist on Stones Throw. What’s your current relationship with Blacc like?
Peanut Butter Wolf: When I called Aloe last year and asked him to be interviewed, he was very nice, but did decline, telling me he didn’t wanna tell his story for the Stones Throw film because he is working on an Aloe Blacc documentary and wanted to save it for that. As for our relationship, I don’t see him much these days. It’s been a minute.

SLUG: The film has been screening at film fests since last year—how have audiences reacted to it thus far?
Peanut Butter Wolf: I’ve been to some of the screenings and it’s fun to hear what they say after. My mom was disturbed by Folerio [Peanut Butter Wolf’s alter-ego], whom she didn’t know about before the film.

SLUG: What do you hope audiences glean from the film?
Peanut Butter Wolf: I want them to not fall asleep during it. That’s my goal when I watch a movie.

SLUG: What do you hope the film will do for the label and its artists?
Peanut Butter Wolf: I hope everyone goes out and buys the Baron Zen album.

SLUG: You’ll be at SXSW doing Q&As after the screenings there—have you been to SXSW before? Are there any films or music you’re looking forward to while you’re there?
Peanut Butter Wolf: I go to SXSW every year. I’m not really going there with an itinerary, other than my own performances, but it’s always a good time out there.

I can assure you that Wolf’s unabashed nonchalance is nothing short of genuine. This film is a rare look into a culture that shuns the limelight and lives off of purely artistic and personal motives. Wolf is certainly a character, and if Quas is the “bad character” alias to Madlib then the said Folerio character is Wolf’s similar alias with a dose of disturbed romance. For all of these characters, and a label that’s a music treasure, to make sense, I suggest you head over to stonesthrow.com and begin or continue your quest into left-of-center music. It’s out there, and just waiting to be discovered. Our Vinyl Weighs a Ton will hit select theaters in March 2014. Follow the film here.