SLUG Mag Soundwaves
Episode #395 – Cotes
00:00 / 18:06
Spotify Stitcher
RSS Feed
Share
Link
Embed
Sub Verses, Akron/Family’s seventh studio album, is best viewed through a wide lens. It is busy, incorporating their signature three-part harmonies, buzzing electronics and complex guitar lines. It is also really, really heavy. Sub Verses takes in travel, aging and a sense of place shot with an IMAX-level widescreen. Its reference points are the locations filmmakers use as alien planets. I had a chance to email vocalist/bassist Miles Seaton from my place in Swaziland about their latest album and how traveling and location have impacted this album. 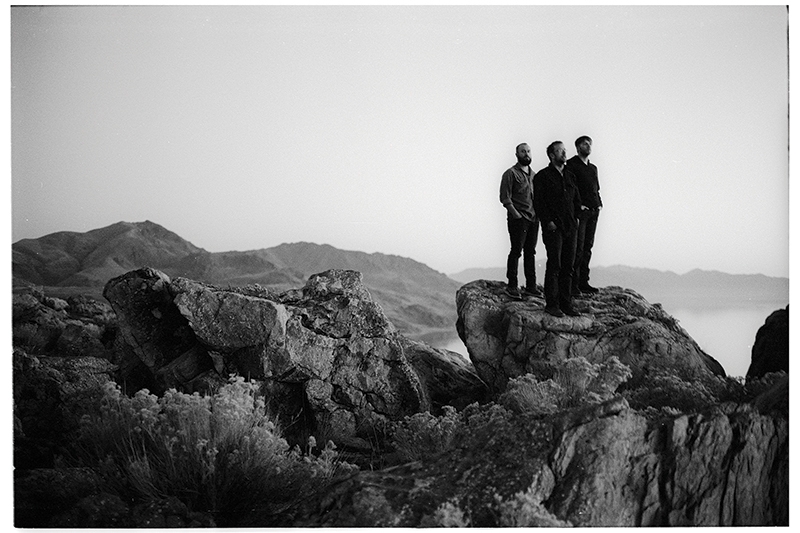 Akron/Family have released the heaviest album of their career with Sub Verses, influenced by travel and location. Photo: TJ Nelson
Sub Verses, Akron/Family’s seventh studio album, is best viewed through a wide lens. It is busy, incorporating their signature three-part harmonies, buzzing electronics and complex guitar lines. It is also really, really heavy. Sub Verses takes in travel, aging and a sense of place shot with an IMAX-level widescreen. Its reference points are the locations filmmakers use as alien planets. I had a chance to email vocalist/bassist Miles Seaton from my place in Swaziland about their latest album and how traveling and location have impacted this album.
SLUG: One of the influences I hear a lot on Sub Verses is North African “desert blues” from places like Algeria, Morocco and northern Mali. Have you spent any time in that area, or have you been influenced by music from that area?
Seaton: Both Seth [Olinsky, vocalist/guitarist] and I have traveled to Morocco, and Seth has spent quite some time in Ghana, and both “Whole World is Watching” and “Sand Time” have the desert blues influence for sure. The other North African–influenced song is “Sand Talk,” which has a variation on a beat I kept hearing everywhere when I traveled to Morocco last summer for a festival of Gnawa music. Meeting the people there and seeing the role that this music played in their life … it was at once both totally casual, or “in the air,” and deep and inextricably tied to people’s lives.
When it’s time to tell our stories, musically, we are ideally sharing deeper personal truth from our own perspective, while acknowledging that lineage or tradition. The people I met and their [experiences] of life and what their music means to them is so different from what it means to me, and so there is a level of respect and understanding myself as a perpetual visitor, which can lead me to feel that using a musical language or impression of a sound in our songs is almost like using a picture of their traditions to tell my own story. So in a way, for me, I tried to approach this album looking for a deeper recognition of what it is I look for or am moved by in all and any music I love … something less aesthetically specific (though I love driving rhythm and repetition and a more modal approach to composition) and more of a spirit or soul that is deep enough to be shared by all people.
SLUG: Your previous album, Akron/Family II: The Cosmic Birth and Journey of Shinju TNT, was purportedly recorded on a volcano in Japan and in an abandoned Detroit train station. Was there anything in the recording space that influenced Sub Verses, specifically in some of the heavier moments of this album?
Seaton: The land around where we recorded was incredible. The desert borderlands of West Texas are beyond spacious, and the scale of that space is HEAVY. There is a power to the geology there. We recorded in this old adobe structure, with stone floors and high ceilings, and when we walked outside, there was a whole lot of nothingness for a really long way off. It certainly led to a contemplative atmosphere … which has its own “heaviness,” ha!
SLUG: Sub Verses is a heavy album—bone-crushingly loud and serious. What went into these songs, and the album in general, that influenced the heaviness of this record?
Seaton: I think there was a general feeling of wanting to bring the focus of this album to the ground, and into the body—wanting to not shy away from depth or intensity, or foil it with something lighter. These elements have always existed in our music, but always with something to counter them. We’ve gotten more comfortable with making intense statements artistically. There was a sense of wanting to make something confrontational, in both rock n’ roll terms and also speaking for myself. There was a sense of wanting to acknowledge more of a range of emotions, and to draw more readily from personal experiences, and some of those were very tense and heavy. So, in a sense, it’s (as albums are) just a reflection of where we were at in those moments, and these are some heavy times.
SLUG: When you started making music, you were located in Brooklyn, but you have since taken up residence in different parts of the country. What effect does living in different parts of the country have on making an album? Especially one as cohesive as Sub Verses?
Seaton: We all aim to lead full and rich lives both personally and artistically outside of Akron/Family, so frankly, it’s hard, or can be, to get everyone together long enough to work up a group notion of an artistic statement. In this case, it really manifested as really interestingly different perspectives on the same goal of making a heavy record. I am surprised myself, at how cohesive Sub Verses sounds.

On May 27, Akron/Family will be bringing their world-tested harmonies and desert blues guitar licks to the Urban Lounge with guests Avi Buffalo and M. Geddes Gengras.