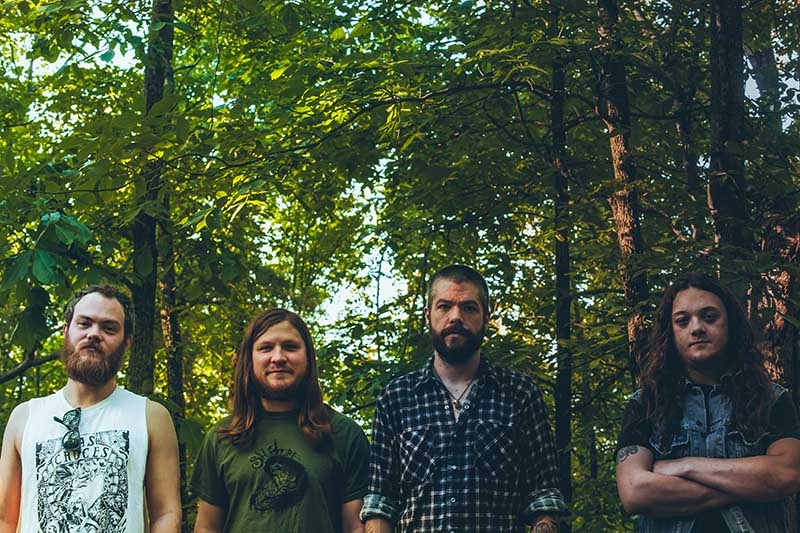 Over the last three months, Pallbearer have been on the road in Europe and North America, playing shows virtually nonstop. A tour schedule as relentless as theirs might seem exhausting, but bassist Joseph D. Rowland reached the end of their European tour with a renewed sense of enthusiasm. “It’s hard to believe that it’s over now—I kind of wish it was still going on,” he says of their 35-show tour. “We were ready to do another 35 if we had to.”

The offer to play such an extensive tour rarely falls to bands as new as Pallbearer, but Rowland says that the success of their debut album, Sorrow and Extinction, earned them the support that they needed to make the trip. “Sorrow and Extinction developed a following pretty quickly, and luckily, we had a lot of people in our corner to help push the new album,” he says. “It sort of came out of the gate pretty hot, surprisingly. None of us really expected that at all.” Despite their sudden popularity, Pallbearer try to focus on their music, not on the publicity. “It’s basically like we do with everything—try to take everything in stride, not have any expectations about what is coming next and just roll with it,” says Rowland.

The beginning of their tour followed the release of Foundations of Burden, Pallbearer’s sophomore release. He says that the fan response to the new album has been a little more mixed this time around, but people seem to be catching on to their new sound. “We’ve heard people say that they feel like the songwriting has matured a lot, and the direction that we’ve taken is way beyond anything we had on Sorrow and Extinction,” says Rowland. “Personally, I agree. I feel like we’re a lot more adventurous on this one, and it’s really more of a showcase of what Pallbearer is all about.” Indeed, the new record takes a hard left turn at the intersection of traditional doom and sludge, heading into something a little more melodic and musically diverse.

Foundations of Burden also bears the hallmark of a different approach to the band’s songwriting. The songs on Sorrow and Extinction originated in whole-band jam sessions where everyone pitched in relatively equally. “This time around, Brett [Campbell] and I wrote the material separate from each other,” says Rowland. “We each brought [ideas] to the table, came up with the basic songs, brought them to the band, and started working through the arrangements as a group.” While it’s certainly nothing revolutionary, their approach makes sense in the light of an album that feels tighter all around than the debut. However, Rowland does want to return to a more collaborative songwriting model for the next album.

Pallbearer seem to be shaking free of the expectations that come from writing music in a genre as established as traditional doom. While they do acknowledge their influences from early doom bands like Candlemass and Saint Vitus, Rowland finds inspiration in an altogether different corner of the music world. “Pink Floyd is an inspiration,” he says. “The more emotional and expressive end of ’70s progressive rock is a pretty big thing for us. Bands like Robin Trower, Boston, Rainbow and Asia play pretty heavily in what we like to do.” Even further, he expresses a personal interest in the “sacred music” of the Medieval and Renaissance period. That interest could account for the greater emphasis on major-chord progressions and the rambling guitar overtones of songs like “The Ghost I Used to Be.”

When the band finally makes it back home, they hope to get some time to work on solo projects and keep brewing up new Pallbearer material. “I know Devin [Holt] has a lot of songs he’s been working on. I have a little bit of material that I’ve been working on here and there,” says Rowland. “I imagine that will end up surfacing at some point.” As far as another official Pallbearer release, he says that work has started, but at this stage, only a few ideas are being tossed around. Instead of focusing on cranking out another album, the band hopes to get on the road again soon, touring through North America and Europe once more. It’s unlikely that touring will interfere with the writing process, as even with their rigorous touring schedule, Pallbearer have found ways to keep writing songs on the road. “We’re going to get a few of the headphone amps that are available and be able to work on stuff through those,” says Rowland, who explains that they can record any sketches through an iPad to continue working on them after they get home.

Surrender yourself to the emanations of depression and grief as Pallbearer take the stage on Dec. 13 at Kilby Court. Their sorrowful serenades will join with Sólstafir’s undulating waves of post rock and Mortals’ savage sludge attack. Tickets are $13 in advance and $15 at the door.