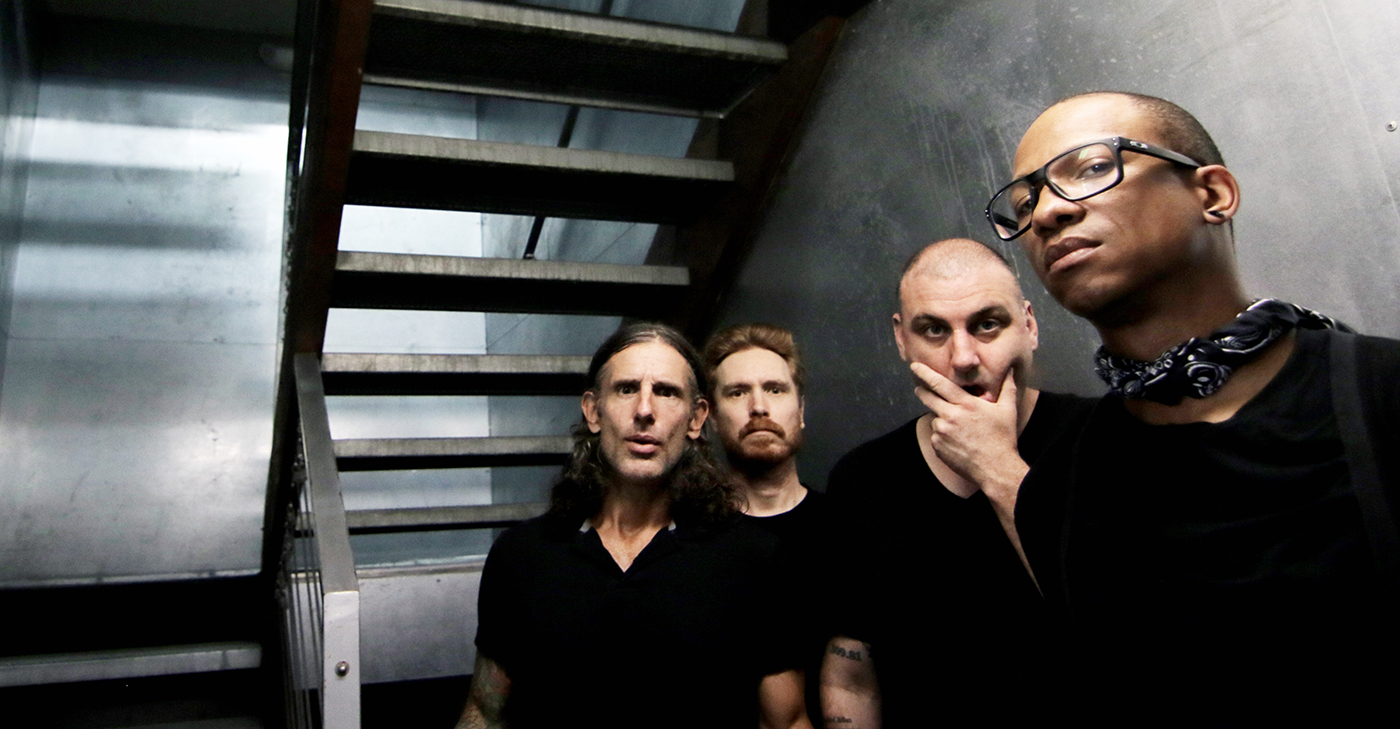 Pandemic Arcade: Psychic Graveyard Premieres Music Video for Their New Single, “Is There a Hotline?”

Today, SLUG is thrilled to premiere the music video for “Is There a Hotline?,” the new single from noise-rock outfit Psychic Graveyard. Check out the pandemic-themed video below, followed by a Q&A with Psychic Graveyard’s Eric Paul.

They haven’t left their apartment in four days; most mornings, they wake up thinking their breathing is shallow and they’re one cough cloud away from being hospitalized; minutes later, they realize it’s just heartburn from the terrible quarantine diet they’ve subjected themselves to, and they’re all quietly—yet collectively—freaking out: This is the audience that Providence/San Diego–based noise-rock outfit Psychic Graveyard is currently playing to with their new single, “Is There a Hotline?” On the surface, the song could easily amplify the existential dread most of us are facing. But like any good psychedelic experience, if you lean into it, you can find the humor embedded within the absurdity of it all.

The song’s accompanying music video drives this joke home, posing almost as a trailer for a run-and-gun game from the early ’90s. The game’s protagonist travels through a desolate city landscape while fighting off toilet paper-wielding monsters with their shopping cart. After a few scuffles, our hero discovers that they are running low on toilet paper and makes their way to a grocery store to replenish his reserves, only to find that they have one final boss battle before they can rest. Our character defers to their trusty old shopping cart, but the boss is too strong—our hero ultimately dies because they did not wash their hands.

I felt better about everything after watching the video, even if just for a few minutes. There’s a degree of solace in collectively acknowledging how powerless we are in this whole fiasco. SLUG reached out to the comically dark minds behind the video and asked a few questions regarding Psychic Graveyard, their new single and their forthcoming album, A Bluebird Vacation, out May 22 through Deathbomb Arc. Preorder the digital album below, and find information on physical releases through Deathbomb Arc’s webstore.

SLUG: How did Psychic Graveyard form? How has the group grown/changed since its inception?

Psychic Graveyard: Nathan Joyner, Paul Vieira and I (Eric Paul) all met in 2006 while our former bands were touring together. The three of us quickly became friends. In the summer of 2017, Nathan’s band, Hot Nerds, and the band that Paul and I were playing in, Doomsday Student, [both] went on indefinite hiatus.

Desiring to stay creative, Nathan asked if he could start sending Paul and I song ideas that he was working on. Paul and I really enjoyed the material and we began recording parts here in Providence and sending them back to Nathan. The following summer, the three of us got together and mixed and arranged all that material, which turned into our debut album, Loud As Laughter.

Because Paul and I are located in Providence and Nathan is in San Diego, it took us a very long time to figure out an effective process writing, arranging and recording. Eventually, we did; we sort of invented our own language to do it.

Half the songs on Loud As Laughter were live drums and the other half were drum machines. When SKiN GRAFT Records offered to release the album, we had to figure out how to play the songs live—which was another ordeal. We went back and forth between using a drum machine live or getting a drummer. Thankfully, we decided on a live drummer. This is when Charles Ovett joined PG.

Paul and I met Charles when he attended a Doomsday Student show at The Metro Gallery in Baltimore, MD. At the time, Paul, Nathan and I were debating the drum issue when I saw a video online of Charles playing with his band, Joules. I was blown away by how hard he hit and how fun he was to watch. Upon seeing this video, we immediately emailed Charles and asked if he would have any interest in flying into Providence and playing some songs with us to see how it felt. I can honestly say, within the first fifteen minutes of playing together, it felt that we had been playing together for years.

SLUG: On your debut album, Loud As Laughter, you guys would send files back and forth until you decided on the final version. What was the process like for recording the new record A Bluebird Vacation? How do you think that process affects the music itself?

PG: The biggest difference between Loud As Laughter and A Bluebird Vacation is [that] the new songs were all written after we played live with Charles. So while writing them, we just placed generic placeholder drums with the idea that Charles was going to write and perform his own parts in the studio.

Another difference is that, when we were writing Loud As Laughter, we were not viewing PG as a live band. So we didn’t consider how the songs would be performed. But a lot has changed since Charles joined. We wrote all the new songs with the idea of playing them live in mind. They definitely have much more of a live feeling to them as opposed to the songs on Loud As Laughter.

SLUG: How does the sound of A Bluebird Vacation differ from Loud as Laughter?

PG: The biggest difference was the addition of Charles on drums and recording it at Machines With Magnets with Seth Manchester. Seth has been producing some of the wildest records in the last ten years, including You Won’t Get What You Want by Daughters, Sonic Citadel by Lightning Bolt, Lingua Ignota‘s Caligula, I Have Fought Against It, but I Can’t Any Longer by The Body, just to name a few.

SLUG: Can you tell me a bit about “Is There a Hotline?” Why did you pick that song to be the album’s second single?

Additionally, the lyrics mention “this is a crisis” a few times. What was the original impetus behind that song? How do you think that song fits into the current global health crisis?

PG: It’s funny: “Is There A Hotline?” was one of the earliest songs we wrote for the record. It was a song that would come in and out of focus until we finally arrived at the final version in the studio in January 2020. Nate sent me the original idea for the song back in November 2018. But I didn’t get around to tracking my vocals and writing the lyrics until June of 2019. I remember this well, because at that time, I was being forced to switch antidepressants because I could no longer afford the ones I was on. The lyric [you pointed out] reflects my need for relief from the awful withdrawal I was experiencing from leaving one medicine and the crazy feeling of adjusting to a new medicine.

But even though the song is not about the worldwide pandemic we are currently experiencing, the lyrics seem to capture the feeling of it. This is why we decided to have it be the album’s second single.

SLUG: The cover for your upcoming album, A Bluebird Vacation, looks great. Who made it? Can you please expand on the concept of a faceless head? Does the color blue have any special significance?

PG: When the band was discussing art for Loud As Laughter, we realized we all had an affinity for the collage art of the Dada movement. We thought it would be great to have our artwork reminiscent of this movement. We concluded [that], if this art spoke to us, then it must also speak to our music. Nathan created the cover art for A Bluebird Vacation. It follows in the same collage-type style. The faceless man reflects how the members of PG tend to exist more in their own minds than they do in the actual world. [Laughs.] The color scheme was just a design decision. The title of the album is a reference to a prescribed pharmaceutical that I rely on.

SLUG: The word “laughter” comes up in your previous album’s title, as well as on the song “Backyard Full of Laughter” off the new album. Are these connected in any way? What role does the idea of “laughter” play in your music?

PG: They are connected. The year that PG started taking shape, my son was diagnosed with Autism Spectrum Disorder. At the time, he was almost three and still non-verbal. Yet, we would still communicate in the most beautiful of ways—one of those ways was laughter. He has the most contagious laugh! Because he didn’t have words, I treasured his laughter. Most of the lyrics on Loud As Laughter were about my son and my struggle to understand what his diagnosis is. There are a few songs on A Bluebird Vacation that are about my son, but not as many.

That song, “Backyard Full Of Laughter,” is about planning his fourth birthday party and how different it is to have a birthday party for a kid who finds happiness in things that most other kids don’t enjoy. For example, the opening line, “He only wants insects at his birthday party,” speaks to how my son is more amazed or captivated by insects or objects he finds in nature way more than any person. He is a very unique person. Although there are challenges, I embrace his eccentricities.

SLUG: What’s next for Psychic Graveyard?

PG: We are just going to wait out this pandemic and hope to get back to touring and supporting A Bluebird Vacation.