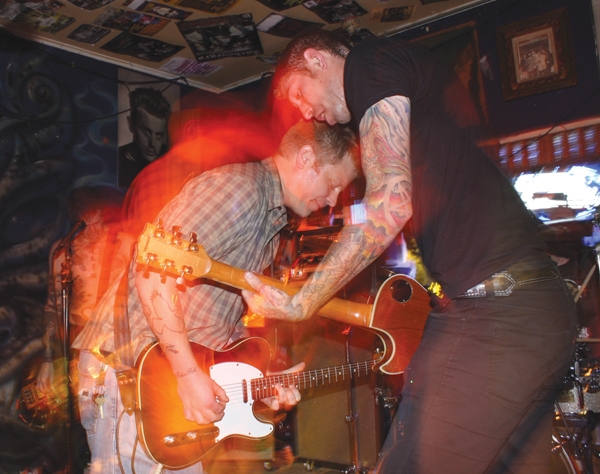 The road is fuckin’ hard. Jack Black said it best on Tenacious D’s debut album, but Prize Country actually lives the difficult lifestyle of touring musicians. With almost 250 shows in three-and-a-half years, the band has carved its way from coast to coast. Touring is life for the 30-something road dogs—not a necessarily easy thing.

“The only reason we go back and get jobs is to tour again,” said vocalist/guitarist Aaron Blanchard. “It’s not getting any easier now that we’re in our 30s,” said guitarist Jacob Depolitte. “We’re those old guys.”

Being the “old guys” suits Prize Country. The band’s maturity shows in its tight, but raw, sound that is as brash as it is groovy—a perfect match for former and current tourmates, Salt Lake’s own LOOM.

“We love those guys and girl,” said Depolitte about the experimental four piece. “We have a lot of stories with them.” Those stories include drinking human urine, late-night swimming escapades and all-around drunk times.

“Kim [Pack, violinist for LOOM] once drank [LOOM vocalist] Josh [Devenport]’s piss, thinking it was beer,” said Blanchard. “Touring with them is great because they’re such good friends of ours, but it sucks because they kill it every night.” Both bands are killing it now on a full U.S. tour. “Their bus is awesome,” said Depolitte, referring to LOOM’s custom-painted school bus they call The Crucial Greaser. “We’ve all drank many a beer in the bus. It’s weird because even though they have such a huge bus, they always get the best parking.”

Tour buddies aren’t the only connections Prize Country has to Utah, though. Depolitte hails from the city of salt. “I lived in Salt Lake,” said Depolitte. “I was in a few bands here, like The Kill and Union of the Snake.” The guitarist left SLC for a change of scenery and the band came together through a mutual friend. “I needed to leave Salt Lake, so I got up there and Dreu [Hudson] from Her Candane [now I Am The Ocean] hooked me up with Josh [Northcutt, drummer, formerly of Clarity Process]. The rest is history, I guess.”

Portland has been good to Depolitte and crew, as they’ve amassed a decent following there. “Portland is great because on any given night, there are at least five shows that are worth going to—it’s easy to be complacent there,” said Blanchard. “The bad thing is that it’s so saturated, so you really have to work your ass off to get people to your show.” Depolitte agrees with his bandmate’s sentiment. “Portland is a great place to be an artist. We’re just another band among thousands of others, but I think we play some kick-ass rock ‘n’ roll,” said Depolitte. “The early days of MySpace were great because you could get your music out to anyone who wanted it all around the world, but now it’s so saturated that you’ve got to work harder, even on the computer, to get yourself out there.”

Getting out there is what Prize Country does best. Their tours are lengthy, and they wouldn’t have it any other way. “We love touring,” said Depolitte. “We go out and play as much as we can so that we’ll find people who actually care about music. It’s funny, though, because we don’t really have fans—we have friends that come out to the shows and party with us after.” Salt Lake is no different, as their Burt’s Tiki Lounge show Oct. 10 brought out old friends and new converts.

Prize Country’s current tour with LOOM is promoting their second full-length album, …With Love, which will be released on Hex Records Nov. 3. The boys are very excited about it because it best represents their sound and songwriting skills. “Listening back, I feel like people were stepping on toes [in previous releases] as far as songwriting goes,” said Northcutt. “The new record feels different. We’ve adapted a whole new style of songwriting—this time, everybody shines through.”

“We had four songs written before Jon [Hausler, bass] joined, but he made us sound great—he beefed up the band, said Depolitte.” The boys worked with Kris Crummett (Fear Before, Drop Dead Gorgeous, I Am The Ocean) at Interlace Audio for their first full-length, Lottery of Recognition (Exigent Records), but tapped Stephan Hawkes to track …With Love. “We’re happy with the way the new album sounds,” said Depolitte. “[Hawkes] is a very talented engineer. We trust his ears.”

Hex Records is a special label for the band to be associated with, according to Depolitte. “They’re great because they actually care,” said the guitarist. “Releasing stuff can often be a popularity contest, but they just want to put out good music, and they believe in us. We don’t want a gimmick, and they’re ok with that.” Depolitte is no stranger to releasing albums, as his vinyl-only label, Failed Scene Records, has put out some of Prize Country’s releases, as well as other quality bands. “I started Failed Scene so I could put out music I care about,” said Depolitte. “I do it for stuff that’s hard to get a label behind. It’s hard enough to get a label to back a 7”, but nobody is going to do that for an unknown band. That’s where Failed Scene comes in.” Flying Elephant Records is a France-based label that has displayed interest in the band. The label will handle limited European distribution for …With Love.

Prize Country plans on breaking the 300-show mark in 2010 in order to promote …With Love. Salt Lake will surely see them tear up the stage again soon.