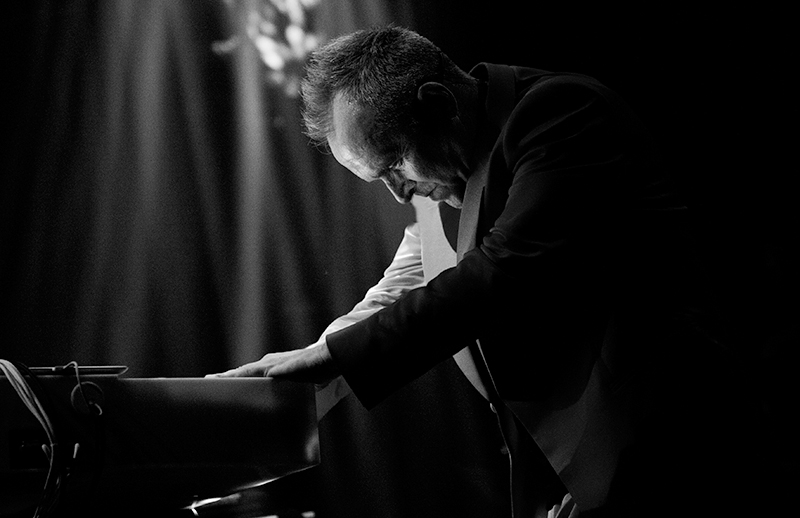 When I discovered Howard Jones in 1989, I felt like I was arriving late to a party that everyone else had been dancing at since the release of “New Song” in 1983. Even the fashionably late had been there since Live Aid in 1985. I didn’t see Jones in concert until 1992, an acoustic show at Kingsbury Hall.

I wasn’t as late as I initially thought, as Jones has continued to release albums and tour to this day, nearly 25 years after the Kingsbury Hall show. I’ve seen him a countless number of times and never walked away disappointed.

“I set out to be a musician because I loved doing it. I wanted to play, do gigs and make records. All of the other stuff is kind of ephemeral really, it can go overnight. But the desire to be an artist, if it is genuine—it will be there through [your] whole life.
As you get older you can be more confident about things because you aren’t feeling like you are competing with other people. It’s like you suddenly realize, ‘Oh right, there’s only one of me and no one else can do what I do. So, go and do it confidently.’
I think that’s something that comes from being around for a while because you’ve seen a lot of things come and go, but you’re still there.” -Howard Jones

SLUG: Many musicians seem to run out of ideas the further they get into their careers. Your willingness to experiment with your sound has kept my interest. Was that a choice you made on purpose, or are you simply following your muse?

Howard Jones: I think that to be constantly experimenting and trying new things and developing what you do is part of being an artist. If you’re going to follow somebody, as a fan, you really should demand that from your artist. That they keep throwing curves at you and taking a direction you didn’t expect them to go and enjoy the ride. That’s what I really love about my favorite artists. That’s what they always did. They took a few risks and tried something different. Sometimes it worked, sometimes it didn’t, but you still love them.

SLUG: Is there new material in the works?
Jones: I’m halfway through a new album. I’ve been writing quite a few songs for films recently, so three of those will be on the new album. There’s a film called Animal Crackers, an animated fantasy film coming out in April in the U.S., and I wrote a song specifically for a point in the film, so I’m very excited about that. It turned out really well, in my opinion. That’s a track that will be on my new album later in the year. I’m playing it live as well; I always like to play something new for people so that they know that new stuff is coming.

I’ve two songs from Eddie the Eagle. I ask the audience which they’d rather hear, the Animal Crackers track or the Eddie the Eagle song that they haven’t heard. [The second Eddie the Eagle track] is actually in the film, but you really can’t hear it.

SLUG: What can audiences expect from the shows at the Egyptian Theatre?
Jones: There’s a lot of audience involvement. Because I’m doing five shows, I’m sure that there will be people who come to more than one night, so it won’t be the same show each night. I’ll change it up.

SLUG: Do you enjoy these more intimate performances?
Jones: When you play the small, intimate venues, there’s no way to hide. You can’t hide behind the lighting production or having other members onstage with you. You’ve really got to deliver, and I find that as an artist, that is where you develop the most. You develop your piano playing, your singing, your storytelling and your confidence level. I’ve always tried to build an element of those show into my career because I move forward every time I do it.

SLUG: Over the past few years, you’ve done a lot of touring. Does it ever start to wear on you? If it does, it doesn’t show.
Jones: I got to 60 years of age, and it was a bit of a turning point. I realized that this was the last section of my life and I felt like I actually knew how to do this now. I thought, “If you’re at the top of your game, you really should be out there doing it while you can.” Because there will be a point where the voice isn’t in as good of shape, and I never could perform if it wasn’t, so while there is a window where everything is firing on all cylinders, just get out and do it while you can. I think I would regret it if I didn’t. That’s coincided with the fans really responding to the music and coming out to the shows. It’s a great partnership, isn’t it? Artists and fans, it’s a symbiotic relationship.  It needs to be nurtured and fed. If you don’t go out and connect with people, then it is going to fizzle out.

SLUG: How would you explain your relationship with fans in Utah? Is it something unusual?
Jones: I would say it is unusual. I’ve great fans all over the States, but in Utah there was a connection that we made in the early ’80s. It was something about the parks where we choose to play. Something about Park West. Something about the times, the weather, the things I was singing about, it just made this real connection and it stuck through the decades. That’s all I can say really.

SLUG: It’s kept me coming back over and over again.
Jones: It’s like going back to see how your old friend is doing.

SLUG: Either that, or it’s the fact that I’m still waiting to hear “Last Supper.”
Jones: Then that will be it. You’ll hear it and we won’t see you again.

No, it’s going to take a whole lot more than me getting what I want to keep me away.