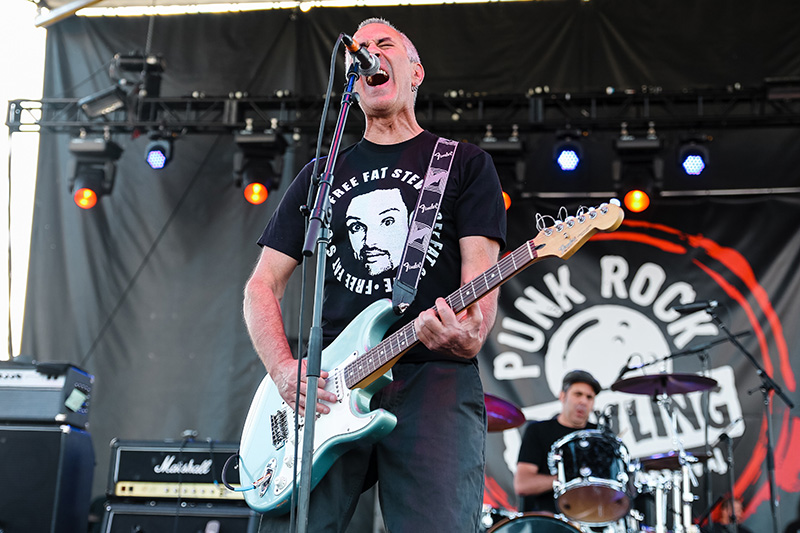 Punk rock, politics and pro-choice were just a few of the things that were touched on in my conversation with Shawn Stern. Raised in the thick of LA’s most derisive wave of punk rock in the late ’70s, Shawn and his brother Mark implemented the D.I.Y. code of ethics when forming their band Youth Brigade and starting their label BYO Records. They also continue to use that approach to lead the Punk Rock Bowling and Music Festival for the past 21 years.

SLUG: Punk Rock Bowling is turning 21 in 2019! How does it feel that this festival has been going this long?
Stern: It’s pretty amazing actually! We had no idea that the little party we threw for all our friends back in ’99 would evolve into a full-blown festival and be what we spend most of our time on each year. This year is going to be the largest attendance we’ve ever had—we’ve already sold more tickets for everyday beyond what we’ve ever sold before.

SLUG: How have you guys managed to keep this festival relevant and still have a draw every year?
Stern: It’s a mystery to me to be honest. My brother [Mark] runs the booking and he does an amazing job and we’re friends with a lot of these bands. The elephant in the room that, as aging punks, no one wants to bring up is that none of us are getting any younger and we’ve lost lots of people over the years. There are a bunch of exciting young bands that are playing this year, I would think that with the douchebag we have in office right now that [they’d] have plenty to write about. I’m at a point right now where I’m hoping that younger generations are going to pick up the flag There are a bunch of bands that are playing this year that are inspiring me to think that that may happen.

SLUG: How do you juggle the festival, managing BYO Records, and find time to perform with Youth Brigade?
Stern: [The label] still exists for us but it’s just out of feeling of obligation. We haven’t released a new record for the label in ten years—not since we did our boxed set. You just got to adapt. So, BYO doesn’t really take up much time. We spend the majority of our year now setting up PRB and when we have a minute or two, we’ll go out and play a few shows with Youth Brigade. I’d really like to sit down and spend some time writing some songs. There’s certainly enough things to write about and I’ve got a bunch ideas that I’ve had floating around and writing down. I say this every year that I’m going to sit down and work on stuff but then I get busy with PRB. This summer I think I’m not going to go anywhere—I’m going to stay home and really try and get some stuff done.

SLUG: A couple of years ago, PRB extended its festival to Denver and even as far as Asbury Park, NJ. What was the reasoning behind the expansion? Recently those offshoots seemed to have folded, what happened there?
Stern: The reason we were trying to do that was Mark was coming up with some issues when he was trying to book bands from overseas. We’re not a big festival, we can’t afford some of the prices that these bands ask for, and they got to fly from Europe with their crew. We thought that if we had three shows to offer them in different cities, it’d be more realistic because all the expenses are now shared between three different venues. It was a good idea, the shows were fun, but we had problems in Ashbury Park—it was far from New York and that’s where most of the people were coming from. I just said, “let’s just focus on Vegas, because that’s what we do.”

SLUG: This is the first year where PRB will have two festival stages. Why the second stage?
Stern: That was Mark’s plan. He wanted to see more music and we have the space and the time. There are so many bands that want to play and we feel bad that we weren’t able to get anybody on there, so he figured we add a second stage and we can add another seven bands and give the opportunity for a lot of newer, younger bands.

SLUG: PRB has a few “house bands”—Rancid, Bad Religion, Cock Sparrer and Descendents all seem to play every couple of years. How do you go about rotating them evenly for each festival?
Stern: Well, that’s the challenge, right? There’s only about 15 to 20 bands that can headline something like Punk Rock Bowling, and we need three of them every year. We try to divide every two to three years. Last year we tried some new stuff out with Rise Against and At the Drive-In. I thought the bands were great but, apparently, not all the people agreed. We don’t want to repeat bands but where are the young, new bands that can draw, that can headline, or can even be middle of the bill and stare working their way up? We had FIDLAR a couple of years ago and that went over well, but FIDLAR in L.A. can draw 3-4000 people. I don’t think [they] are driving up to Punk Rock Bowling, so we got to figure out a way to get more of those kids to come out to PRB and support bands like FIDLAR and then we can move on to another plateau and a newer generation.

SLUG: How do you keep your radar about for picking up all these new, younger bands and how do you fit them on the festival?
Stern: Mark is always scouring stuff and I’m looking online, checking new bands out when I have time, I listen to a local college radio stations and I hear lots of new bands here and there. I don’t use Spotify because I’m opposed to their whole model of doing business. Most of the time people tell me, or I go out to see shows and see an opening band you never heard of. The internet helps with bringing bands out of the country. And then, word of mouth—friends of bands who have been on tour who tell us to check bands out.

SLUG: I noticed, especially this year, there’s a lot of, not necessarily newer bands, but well-known bands that are making their PRB debut.
Stern: Yeah, and a lot of those bands we’ve been trying to get for years, but for one reason or another, they’re not available. Especially when they are from overseas which, like I said, trying to bring them here for a one-off is expensive, so if we can catch them on a tour that works out for everybody. We managed to do that quite a bit this year.

SLUG: Which ones are you most excited for and which ones do you think are going to have the biggest draw?
Stern: I’m a huge Stranglers fan, it was one of the first punk bands we listened to back in ’78. I’m always excited to see The Damned. I love Killing Joke and I’ve never seen them before and they played in LA about six months ago and was pretty blown away by how strong Jaz [Coleman]’s voice was. There’s a new band from England called Shame I’m looking forward to checking out. Definitely excited to see The Hives, they put on an awesome live show! Always excited to see Rancid and Descendents. Definitely happy that we finally got The Specials to come and play—they’re another band that were favorites of ours back in the late ’70s and early ’80s. We had them in Jersey a few years ago and they were great. It’s a really strong lineup. There’s so many bands it’s hard to pick one.

SLUG: What is PRB’s “white whale”? Meaning, what band or bands have you been jostling to bring onto the festival?
Stern: You know, the bands that we’d love to see, we’ve been told many times, are never getting back together again. People still ask for them like “You should get Minor Threat, Operation Ivy and Fugazi!” Not gonna happen. I know those people and they have no interest in reforming. We tried to get Jawbreaker, maybe we’ll get them at some point. Misfits would be great, but I think they want ridiculous money—we’re not Riot Fest or Coachella. We don’t have 200,000 people coming everyday, so we just don’t have that kind of money. It’d be great to have the Sex Pistols get back together, but I don’t think it’s ever going to happen. It’d be great to see the remaining members of The Clash, but without Joe Strummer, why bother? We got Iggy Pop and that was one of the best things we could do. There are tons of awesome bands out there that are no longer playing but there’re reasons that they aren’t. I’m looking more to the new bands that are going to blow me away, that’s going to be more interesting.

SLUG: PRB is very active on social media. Do you think it’s easier connecting with people through social media in that you can retrieve everyone’s ideas and criticisms or is it more difficult having to take more opinions into account? How does it affect planning the festival?
Stern: If there’s constructive criticism, I’m totally open to it. We go back and forth and discuss criticisms of every aspects of the festival. In fact, this year we’ve partnered up with a company called R. Cup who make reusable plastic cups. You deposit $3 to use them, you go to the bar and they’ll refill your beer. At the end of the night, you can keep it or you can return it and get your money back. We posted about it on social media and we got an overwhelming positive response—it’s a little thing that ends up being a big thing if more festivals did stuff like that. I try to be responsive to people online, I try to engage people as best I can to be rational and logical and reasonable. I don’t want to get into a pissing war with someone and start name-calling because that doesn’t solve anything. At the end of the day, we can disagree but you don’t have to be nasty about it.

SLUG: Speaking of internet trolls, how do you respond to people who accuse PRB of being a “corporate punk festival”?
Stern: People can think what they think. [Me and my brother] have been doing DIY shit since before a lot of those people were born. Call it corporate if you want, we are a corporation so technically you would be right. I think actions speak louder than words—I think the popularity of this festival and the goodwill of the majority of people that go there and the fact that people keep returning every year says everything. When they’re up there complaining, I can’t convince them about whatever it is they have a problem with, I tell them the same thing every time, “if you don’t like it, you can start your own festival and do it your way.”

If you think Punk Rock Bowling is not an accurate representation of what punk rock represents, the ever-increasing attendance and popularity seems to favor the notion that the people who attend continuously either think that the opposite is true. Even, those that confide in the belief that PRB is corporate still attend because, to some degree, they know that the bands will kick ass and that they will have fun.