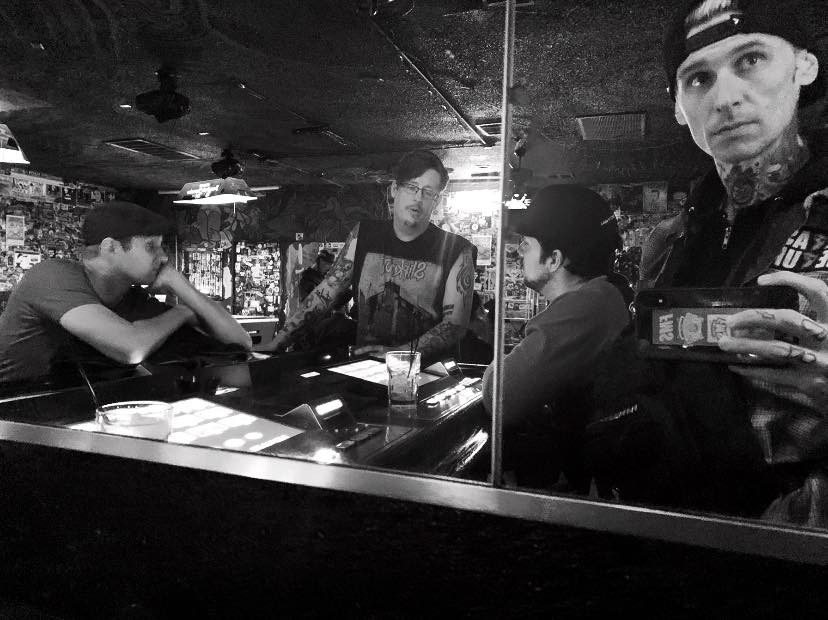 “I grew up punk rock, so DIY ethics are my go-to,” says Brennon Williams, bass player for JDxRevival and founder of the Rex Andersen Foundation. Named after a friend of his who passed away from cystic fibrosis in 2010, Williams started the Rex Andersen Foundation as a yearly donation drive to benefit the homeless. “[Rex] was one of the most amazing people I knew, and I wanted to do something that would honor his name. So the whole concept is that I want to do things that I think Rex would do,” he says.

In 2015, Williams was inspired by a debate on his Facebook feed over what content should be on Starbucks cups around Christmastime. “My social media friends are half republican, half democrat so it’s very divisive. I wanted to do something that would bring everyone together—it didn’t matter what you believed,” he says. Williams decided he wanted to shift the focus off of the political and onto making an actual difference by single-handedly creating the donation drive and reaching out to his friends for support.

Since starting the Rex Andersen Foundation, Williams has been collecting donations and personally taking them to the streets of Salt Lake City, where he distributes the goods to anyone who needs them on Christmas Eve. “I go out to the street and lay out a tarp. Everything is pre-sorted: there’s a pile for coats, a pile for shirts and new socks,” he says, “Last year, I made a hygiene bag with food, hand warmers, gloves and a beanie, and gave everyone I saw one of those.” For Williams, taking the direct action of personally handing out items is his way of making sure that those who need this kind of help are able to receive it, especially now, as space in homeless shelters fills up quickly in the winter months. “I don’t know if it has made an impact more than the night or the week I do it, but I’m willing to help people in the streets [in the ways I can],” he says.

“I’m excited to turn this into a community thing and try to expand the circle every year.”

Having joined JDxRevival earlier in 2019, Williams, along with singer/guitarist Jeff Dillon, saw a chance to spread the word of the Rex Andersen Foundation to their fan base and the local music community. The S&S Presents: Rex Andersen Foundation Homeless Drive show at Urban Lounge on Dec. 18 will feature My New Mistress, Version Two, Shecock and the Rock Princess and JDxRevival. Admission is $5, or free with donations. All proceeds will go toward the Rex Anderson Foundation, where Williams will buy hand warmers and socks to give out along with the donated items he receives.

This year, Williams sees the upcoming show and the support from the rest of JDxRevival as an opportunity to reach a wider audience, “The past four times I’ve done this, it’s been my circle of friends, so I’ve reached out to the same people to get the donations,” says Williams. “I’m most excited to turn this into a community thing and try to expand the circle every year. Music brings people together, and if we’re all together we can do some real good.”

For Dillon, the positive mission of this event is something he predicts can become a punk rock tradition for making change in the community for years to come. “My honest hope is that through this show and this event, we make this more of a thing,” he says. Not just among [Williams] and his group of friends, but a bigger, more consciously aware event. I honestly hope that we’re going to end up having to grab the tour van and loading [donations] in the back of that because there’s no way in hell it will fit in his little car.

The items most needed this year are new socks and underwear, hygiene products (travel-sized encouraged), and gently-used items like coats, gloves, blankets and hats. While highly mobile foods(such as granola bars) are favored over anything that needs to be prepared, Williams will take any canned food donations to a homeless shelter. If you are unable to make the show but still want to help, donations can be arranged for pickup by contacting the JDxRevival Facebook page, or by donating to the event’s GoFundMe.

“If you have something to donate, you might as well give it to this. In the meantime, you get to see a kick-ass rock show.”

For Williams and Dillon, the primary goal of the event is to bring the local music scene together as a community, while inspiring others to take action to help the less fortunate. “The ultimate message for this is you don’t have to wait for me to help. Go out and help, or if you want to start something, I support it,” says Williams. For Dillon, as well as the rest of JDxRevival, the opportunity to see a killer lineup and do something to help a greater cause is a win-win for everyone involved, “If you have something to donate, that you aren’t using anyways, you might as well give it to this. In the meantime, you get to see a kick-ass rock show,” says Dillon.