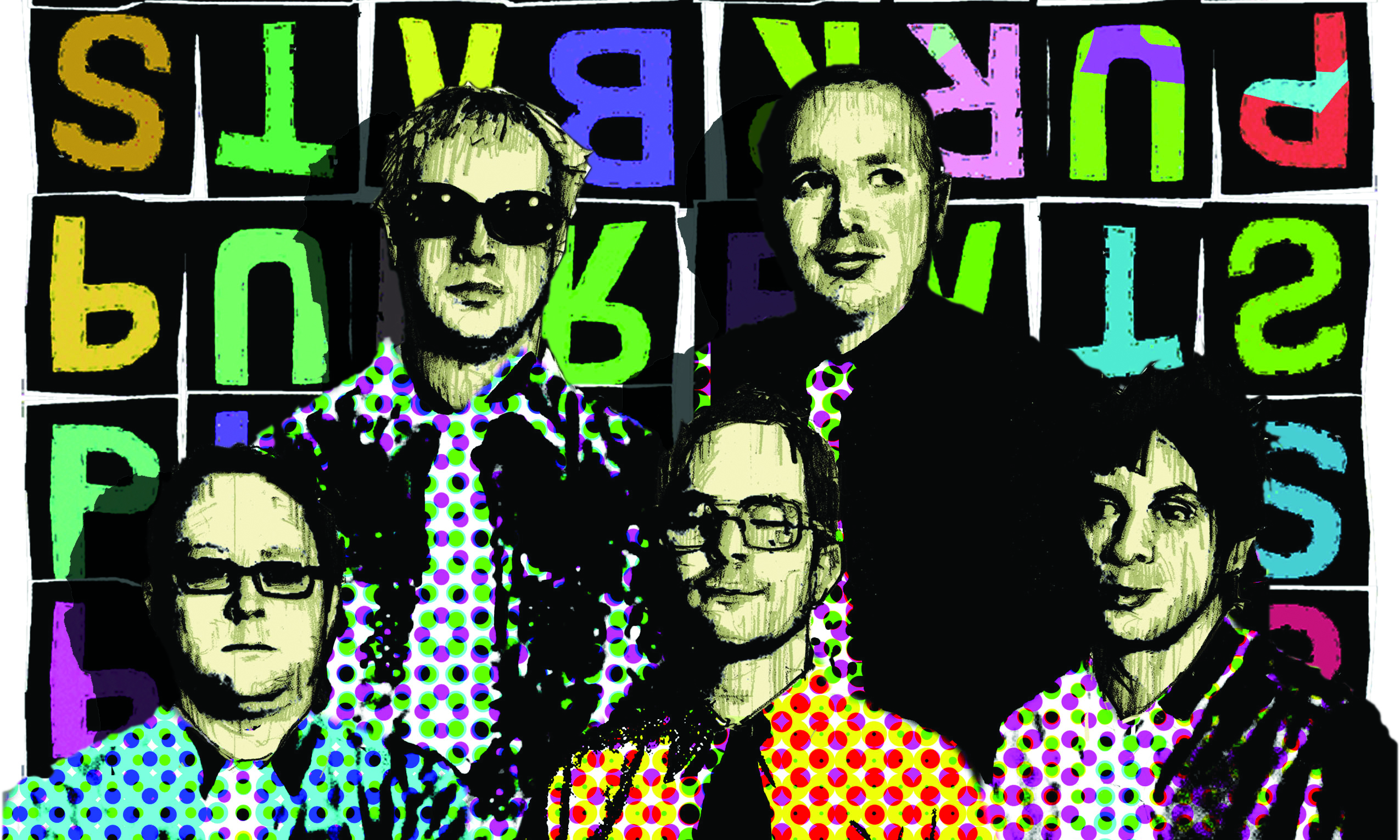 Kyrbir – Vocals
Eli Morison – Guitar
James Acton – Drums
Jesse Winters – Keyboards
Darren Hutchinson – BassPrior to sitting down with Purr Bats front man, Kyrbir, I knew the name Purr Bats and I knew I had seen them play live at least once, but I was drawing blanks when we shook hands and he took a seat across from me at Big Ed’s. It wasn’t until Kyrbir removed his hat—brandishing a crown of four-leaf clovers tattooed on top his head—that I was able to connect the dots. All of a sudden I remembered Kyrbir, in all his glory, bald and big and captivating on stage at the Urban Lounge, wearing a dress no less, alongside his other silk-skirted band mates.This connection was vital because Purr Bats are very much a visual musical act: employing costumes and revelry where they can; they endeavor at theater as deliberately and tastefully as they do music. The result ends up being a beautifully, ugly cross-dressed melange of pop and disturbance. The aim of Purr Bats, as Kyrbir informed me, is pop. Pop in the sense of “fun sing-along songs” where there’s “no big political or social agenda; no emphasis on trauma. We just want to keep it fun.”

And what fun Purr Bats are! Every live show promises faithful followers, happy demeanors and dance parties—I danced in my underwear last time I saw them because their grooves were so thick with joy I couldn’t resist getting gritty and sweaty.

Purr Bats aren’t all fluff though; as their hybrid name suggests, there is also a dark or strange element—a distress of sorts that elicits disturbance. However, the “Bat” in Purr Bats is usually undermined and masked. Kyrbir explains that “occasionally it [trauma] will slip-in, but I usually try to keep it away from the project or turn it on its head.” In effect, Purr Bats are this “spasmodic, tongue-in-cheek” knotty pop act that employs “wink-wink and nudge-nudge” tactics to keep the rhythm rolling and the party purring despite the natural tendency of nocturnal ghoulishness—or foolishness.

With three albums to date—Soft Fluff, Bionic Fresh Moves and Salt Lake City—and a fourth on the way, Purr Bats show their dedication and determination to bring the simple pop of the eighties back into flight. Despite a merry-go-round revolution of band members—early line-up consisted of members of he Red Bennies and Ether, and now mixes both The Wolfs and Furs (odd and ironic if you think about the latter mixture of names)—Purr Bats stay on top of keeping the bar halls of Salt Lake City hot and fresh.

The Hyperactive Music Festival in Albuquerque is going to be Purr Bats first show outside of Utah. I hear Albuquerque is hot, especially in the summer: I’m guessing there’s going to be a lot of boys and girls in their underwear dancing to the deceitfully honest, humbly raucous pop sounds of Purr Bats. I’m also guessing (read: foreshadowing) that Purr Bats will be likewise in costume and having just as much fun.