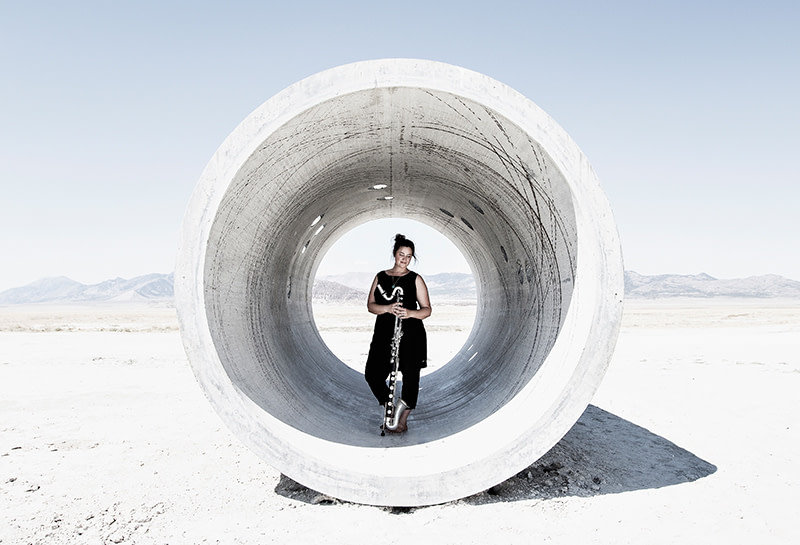 “One definition of ‘symposium’ is simply a party with music and conversation. We like to think of the Vu Symposium in this sense of the word,” says Katie Porter, co-founder of the annual Vu Symposium, an open forum championing musicians who push the boundaries of sound and rhythm. “It’s not a conference and not a festival. It is about a free exchange of ideas between participants who engage in experimental, electronic or improvised music.” The third installment of the symposium, called Vu 3, takes place in Park City from July 10–12.

For Vu co-founders Porter and Devin Maxwell, keeping the symposium as inclusive as possible was an important tenet of the symposium’s founding. “Vu itself also has three meanings: Vladimir Ussachevsky, a pioneer in electronic music who taught at the University of Utah, shorthand for volume units—one measure of the loudness of sound, and sounds like the French word for you (vous),” says Porter. “The last meaning is most important to us—this symposium is about your work and your personal growth as a participant.” In this same vein, the symposium is open to papers and performances—even “works-in-progress” that are not yet complete. The idea is to encourage peer review and inspiration rather than competition. “As competition for slots in national or international conferences or festivals becomes more fierce, it’s important for people to have a place to incubate their thoughts. Vu can be that place,” says Porter.

“When we relocated, we didn’t want to open a venue, so Listen/Space changed its mission to focus on commissioning, performing and recording new works.”

Porter and Maxwell are no strangers to the commercial and artistic sides of the music industry, having run a digital music company from 2003–2010 as well as Listen/Space, a nonprofit venue in Brooklyn, New York, dedicated to commissioning and showcasing experimental music. Then they moved to Park City in 2011. After running Listen/Space, Porter and Maxwell wanted to shift their focus for their nonprofit when they relocated to Park City. “When we relocated, we didn’t want to open a venue, so Listen/Space changed its mission to focus on commissioning, performing and recording new works,” says Porter. Repurposing the sound equipment used for Listen/Space, Porter and Maxwell have found a way to showcase musicians while keeping the event free to participate and attend.

Porter is a solo and chamber clarinetist/bass clarinetist who currently participates in the Experimental Music and Listening Sessions in Boston and who recently attended a residency for instruments and electronics in Madeira, Portugal. Maxwell, with a  PhD from the University of Utah, is currently a professor at Westminster College. Together, the pair make up the Red Desert Ensemble and are the college’s experimental and electronic artists-in-residence for the upcoming academic year. They started the Vu Symposium after Maxwell attended Ostrava Days 2015 in the Czech Republic and came up with the idea in order to bring cellist Robert Jedrzejewski to Utah. “Good Czech beer was involved,” says Porter.

“We want to be a place where people working in these disciplines can present work and get critical feedback in order to create work that is perhaps stronger and clearer than it would be if it had never been presented in a public forum.”

For Vu3, there are already 50 participants announced on their website, from a wide array of styles and mediums, including some pieces that incorporate body movement and other visuals. “Everyone is so very different this year. Many people are working on brand-new performance ideas, new ways of working with electronics, new ways of performing works as composer-performers,” says Porter. In particular, Porter is excited to showcase composer Lainie Fefferman from New York, performing “White Fire” for processed vocals and live electronics, as well as local composer Jacky Card presenting “Nausea,” an electro-acoustic piece for tin-can and voices. The music ranges from chamber music or solo instrumentalists playing compositions that are experimental in sound and rhythm to pieces that feature live electronics.

In addition to these live performances, there will also be papers presented, including a presentation by composer Sean Ellis Hussey from Chicago titled “Refugees Living in Malmö: Connecting Cultures through (Re)Generative Music Discourse (Connecting Cultures through Music).” For Porter, part of Vu Symposium’s mission is to stray away from “keynote” speakers or assigning certain performances higher priority over others in order to foster the artistic process. “We want to be a place where people working in these disciplines can present work and get critical feedback in order to create work that is perhaps stronger and clearer than it would be if it had never been presented in a public forum,” says Porter.

“This symposium is about your work and your personal growth as a participant.”

Live performances and lectures for Vu 3 will take place this year mainly at the Park City Library in the Jim Santy Auditorium on July 10–12 and is free to attend. This year, participants will include a wide array of local, national, and international artists including SLUG Magazine’s own Digital Coordinator, Connor Lockie. For Porter, participation in the past has been a mixed bag as far as national and local goes. For Vu 3, she would love to see more locals take advantage of the symposium. “Locally, it’s about two-way exposure. Vu is about exposing local musicians to national and international musicians and vice versa. We’d love to see more of a local audience enjoy all three days,” she says. Archival performances from past Vu Symposiums can be found at vusymposium.lib.utah.edu and more information about this year’s symposium can be found at vusymposium.org.