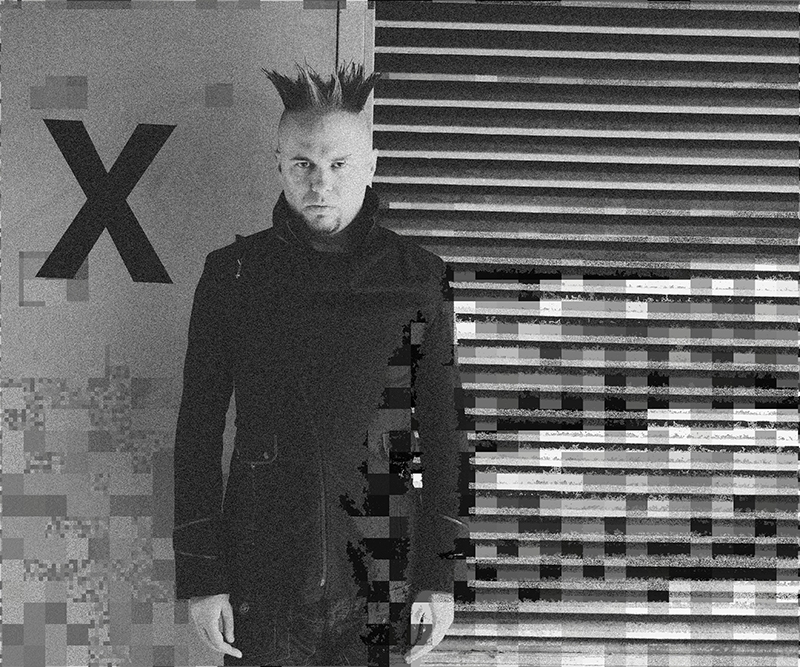 Putting the Pieces Together with Everything Goes Cold

Utah Industrial and Area 51 had brought us The Dead Pixels tour which consisted of Everything Goes Cold and crashfaster. I knew I was in store for an evening that would take me on a journey that started with the sound of the early days of the computer through to today’s complex technological advances.

I was granted an interview with the front man of Everything Goes Cold, Eric Gottesman. It was my chance to slice and dice the brain of the man nicknamed “Pineapple Head.”

SLUG: How old were you when you first became interested in industrial music?
Everything Goes Cold: I was 14 and I was playing in a sort of 1990s alternative band in high school and we were really not sure which direction to take. The bassist wanted to be like Primus, I wanted to be like Depeche Mode and one of the others wanted to be in a black metal band. It was a mess. It was terrible. One day our guitarist accidentally got Psalm 69 by Ministry in the mail from one of the old Music distribution groups like BMG or Columbia house. He kept it because he liked the artwork. He listened to it, liked it and played it for the rest of us. We became entranced and excited by it and immediately started researching and finding other music that sounded like that. So I got really interested in them, KMFDM and a lot of the others classic Chicago bands and the Wax Trax! label.

SLUG: What inspired you to start creating it?
Everything Goes Cold: I had been roped into that band in high school and, after we all were introduced to that type of music, we immediately changed our sound overnight. We actually wound up becoming this ridiculous Goth band that sounded like London After Midnight—but not in a good way. I really liked performing and playing music though. So when I got to college I knew that I wanted to do something more in tune with my own interest.

I met a guy named Greg Dunn who I started See Colin Slash with, which was similar to Everything Goes Cold in some ways but more humor driven and more diverse in terms of sound. We were listening to bands like They Might Be Giants, so those influences were seeping through. Sometimes it would come out really weird but sometimes it would turn out great. It took me a while to find a more cohesive direction, I suppose.

SLUG: Do you have an educated background in music or is this something that is self-taught?
Everything Goes Cold: I majored in and graduated with a degree in music from UC Berkeley. I also took guitar lessons, and choir during school so I think it would be unfair for me to say it was self-taught. My electronic music background is largely self-taught, although I actually did attend classes at Berkeley Center for New Music and Audio Technology, this cool sub school program that does a lot of work with interesting controller design and audio technology. During the time I was there they were working with new kinds of speakers to deal with acoustics differently.

SLUG: Do you play any classical instruments?
Everything Goes Cold: I did play a thing called the Viola da Gamba, a Renaissance instrument when I was school. I have not picked one up for a while—they don’t come up to often. I can read sheet music and my emphasis instrument in school was voice actually so I can sing. I don’t sing opera, which is what most people think of when they think of voice in classical music, but I can sing classical art song.

SLUG: Will you be singing any of that style tonight?
Everything Goes Cold: Probably not but, if you‘ve heard the Psyclon Nine album INRI I did use some of my classical training during our interpretation of the Jewish liturgical piece “B’Rosh Hashanah”—this became Requiem for the Christian Era. I am not going to do that tonight but it has popped up in my industrial music career.

SLUG: During your music career you have been lucky enough to work with many industrial greats. Is there someone that has influenced more than others?
Everything Goes Cold: The bands that I have played with and worked with have had a huge influence on what I do musically to different degrees. The first band outside my own that I played in was Deathline International. A lot of how I deal with touring and handle myself as a musician was stuff that I learned from working with Count Zero, who is also the head of COP International records. I worked there for a while so I learned a lot from him about the distribution side of things as well. I learned a lot about showmanship from Nero from Psyclon Nine. Jennifer from Ayria and Matt from Caustic both influenced me to start having more fun again, after being in a lot of very serious and less fun situation in the years prior.

As for older industrial bands that influenced me and my sounds, I would have to say Front Line Assembly. As for Everything Goes Cold, a lot of the ideas for the project stemmed from American cold wave music from the mid ‘90s. The bands I usually like to mention are Chemlab, Hate Dept, Die Tribe, Christ Analogue, Society Burning, and 16volt. They were all big names at the time, or at least regionally they were. I think the modern context of industrial music has sort of pushed aside a lot of the big guitar oriented bands from the mid ninties.

SLUG: Your recent release “Black Out the Sun” has not only topped the Metropolis Records sales but also has been successful on the Deutsch Alternative Charts as well. Do you see Everything Goes Cold staying on its current path or will you take the sound in a different direction as many bands are currently doing?
Everything Goes Cold: I take a long time to write music. It was five years between our last album Vs. General Failure and the new one. I don’t plan to spend that long between the current album and the next one. It is probably not going to be like next year, so there is definitely going to be an inherent change due to the fact that there is more time. I have some conceptual plans for what that record is going to be like because the three albums put together are hopefully going to form an arc that will make sense to the listeners—an established flow going from one to the next to the next. There will be most certainly be some changes.

SLUG: What would be your ideal song be to remix?
Everything Goes Cold: My ideal song to remix would be “Alkali” by 16volt, which I did remix. It was one of the most favorite things I have ever done in my entire music career. The 16volt song was written in 2003 and wasn’t really released, but I had gotten a copy somehow and I really liked it. We played some shows with 16volt and when they did their Full Black Habit tour which was a part of their reunion and return to music. I mentioned I really liked that song but I was disappointed that it did not show up on the album. Eric Powel informed me that it might wind up on the next one and it did. Then he asked me to do a remix. I got to choose a song that I had already loved for years to do my own interpretation of. I was really happy with how it came out and it is on the 16volt disc American Porn Songs Remixed. There are a lot of songs that I like but I necessarily would not want to remix because I don’t feel like I have a lot to add to them. The difference with that song was I was hearing something in it that was not necessarily on the surface enough for others to understand why I thought it was so great. So I was able to take that opportunity to bring it out.

SLUG: You are known for having many different musical projects. Aside from Everything Goes Cold, what others are you currently focusing on?
Everything Goes Cold: Everything Goes Cold is the only project I really write for. Every so often I will do some guest work on an album here and there, usually for Caustic. Everything else I do, I am just there as a live member. I do have a Caustic show coming up at Cold Waves in Chicago at the end of September. I am very excited about it, as there will be a full line of people in Caustic and it is going to be an awesome show. I play with Ayria on and off. I recently played bass for gofight! which is Jim Marcus from Die Warzau’s new project with my friends Dan, Vince and Mike from Dead on T.V. We played at Terminus it was a really fun and I hope we will continue doing that together. I did not play with them most of this past U.S. tour, but I do occasionally play bass for Grendel as well. Hopefully next time they are back here you will get to see me with them again.

SLUG: Is there anything you would like to add?
Everything Goes Cold: This is the second to last show with our friends crashfaster who are my favorite band in the San Francisco Bay area. They are part of the chiptune scene more than part of the industrial scene but they have a lot of crossover. We have been really happy to expose more people in the industrial scene to their music and to get ourselves heard by more of the chiptune scene. I feel it is a great fit especially since our new album has so much 8 bit and chiptune material on it. Touring with them has been great and hopefully we can do more shows with them later this year elsewhere in the country.