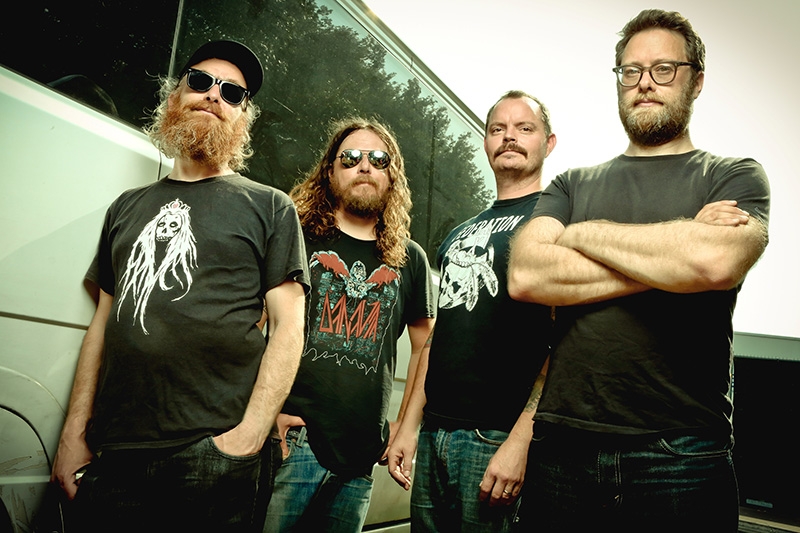 Like a drunk supernova in the darkest reaches of space, Red Fang’s star just keeps getting bigger and brighter. It’s been two short years since the release of their critically acclaimed and, overall, beloved sophomore effort, Murder the Mountains. But if you’re counting time in terms of accomplishments, then two years doesn’t even begin to cover it. They’ve played giant fests like Mayhem, Download, Sonisphere and Orion. They crushed European and Russian crowds beneath their riffs—they’ve shared stages with some of the mightiest names in the genre. For a group of friends from Portland who simply found themselves all “band single” at the same time, this couldn’t be a better underdog story. Even though they’ve collectively been in, quote, “thousands” of bands in their lives, Red Fang have become the veritable jackpot of their musical slot machine: endless combinations finally lined up into the best possible outcome.

The group has met the demands of their rising fame, becoming the kind of tour-hardened road warriors that lesser musicians whisper about in stories to their children. They’ve come through the touring gauntlet with a new record, Whales and Leeches, which is already getting heavy buzz for its first single, “Blood and Cream.” “It’s kind of crazy, the attention we’re getting,” says guitarist David Sullivan. “The song officially first played on some BBC radio show, which is pretty crazy for me. Spin Magazine premiered our song spinning on their site.”
When SLUG last spoke to Red Fang in the summer of 2012, guitarist Bryan Giles told us the band’s one weakness—if you could call it that—is being unable to write on the road. As such, Sullivan tells us that it took a much-deserved sabbatical from touring for the album to solidify. “We gave ourselves this time at home and just focused on writing pretty much every second we could. It was some different kind of pressure—usually, we don’t write like that. The songs kind of come more organically in practices or at home.” Creative processes take so much energy, and the band simply lacks a “good situation” for writing on the road: Long hours, inconsistent sleep schedules and being shoved into the tight space of a van aren’t exactly conducive to genius. But they had pieces of some of the songs waiting and leftovers from previous album writing or jam sessions, which eased the pressure the band felt writing this time around. They had already booked recording sessions and pushed to have the album written by the time the sessions rolled around, a challenge they crushed (with some minor polishing during the recording process itself). The result is arguably their strongest effort to date: Whales and Leeches is 11 tracks of doom and groove, each song with its own signature catchiness. The band even pulled in friends, like Pall Jenkins of The Black Heart Procession, for guest vocals on the sludgy hymn “Dawn Rising” to add to the album’s distinctive flavor—and with great success. They brought back artist Orion Landau to handle the album’s visuals and, as usual, he didn’t disappoint, giving Whales and Leeches and “Blood Like Cream” distinctive ’70s-style horror art that perfectly complements the band’s old-school sonic leanings.
Red Fang’s sound has always been about heavy groove brutality with a bluesy aftertaste—like getting punched in a New Orleans bar after a shot of whiskey. Whales and Leeches carries this familiar banner, but there’s no denying the air of polished maturity laced throughout the tracks, and with it, a new sense of confidence in the sound. There is a great deal more atmosphere and darkness weaved throughout the album—a lot more risks taken and rewarded. The band feels that evolution, too. “I agree with that. It is a little bit of a new move, but I don’t know if it’s really a conscious thing—I don’t know if we’re really like, ‘OK we’re going to take this to a different place.’ It’s more progression for us just in what we do. We’re still trying to do the same thing, which is basically write songs that we like, write music that we enjoy playing and listening to. And it seems like other people like it, too, so it works out.”
Red Fang march to their own beat, and Sullivan defines success in their work: If his band is happy with what they’ve created, that’s a mark in the victory column, and if the unwashed masses love their output and continue to support their touring efforts, well, that’s just extra honey from the hive. “I’m not really thinking about gold records or anything like that—does that even happen anymore? Success, to me, is to be able to keep doing what we’re doing. If we go on tours and aren’t losing money and people are coming to the shows, then that’s success for me,” he says. If the buzz around Whales and Leeches is any indication, the Red Fang supernova is only going to get brighter in the months ahead.
You don’t want to miss Whales and Leeches, which drops the same day Red Fang hits SLC on their headlining tour, Oct. 15 at Urban Lounge. And do yourself a favor: Go to their website redfang.net and keep an eye on their travel blog. The band’s tour manager, Chris Coyle, maintains a text and photograph scrapbook of the band’s adventures, and it is some of the funniest shit you’ll ever read.