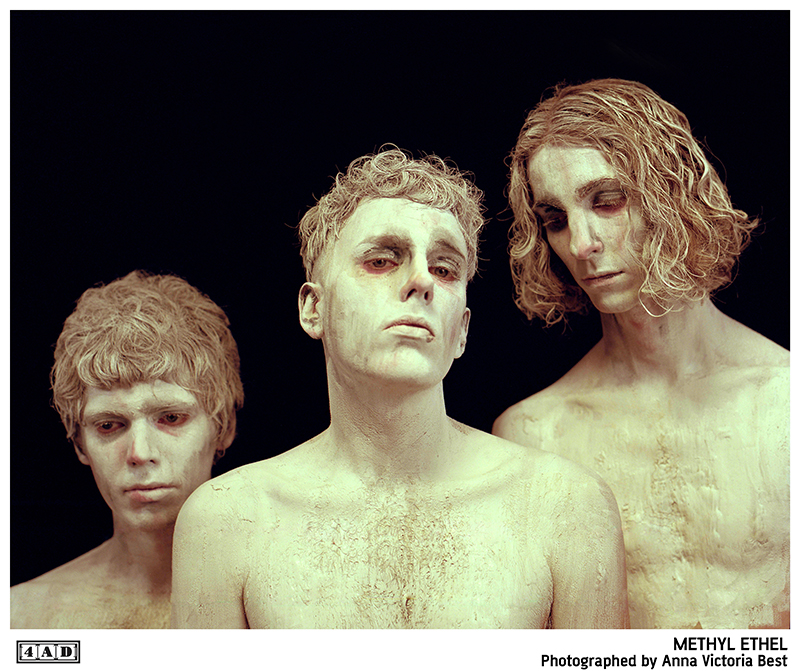 “We weren’t listening to anything—I can’t believe it,” laughs Jake Webb when asked about what he was listening to on a 16-hour drive from Copenhagen to London. He’s the creative mastermind behind Methyl Ethel, who will be making their first journey to Salt Lake City come April 8. They drove in silence, listening to nothing but one another’s hollow breathing. Nonetheless, it’s easy to imagine that Webb had a lot on his mind. Between being in the middle of a world tour and having just released his second album, Everything Is Forgotten, it’s apparent there is quite a bit to occupy his brain.

Perth, Australia, is home to some incredible musicians, from Tame Impala to The Scientists. Methyl Ethel is climbing the list of Perth bands to make waves in the music scene outside of their secluded Western Australian paradise. Methyl Ethel created one of the dreamiest debut albums last year, Oh Inhuman Spectacle. The band came to the surface like a blossoming rose with the intoxicating album. Webb capitalized on the immediate boom and swiftly released a followup with Everything Is Forgotten. Everything Is Forgotten is the one album to soundtrack the entirety of our North American summer to. These anthems are perfect for breezy drives through deserts or along the coast.

“I do give a shit when people don’t like it,” says Webb when asked about the recognition Methyl Ethel received from Rolling Stone and after winning two WAM Awards. “It still sucks when people write that it’s a crappy record and when they write stuff about it as if I don’t care, as if I don’t put effort in. I do try, but at the same time, I realize that’s valid if that’s what you think. I’ll try to do better next time. I avoid it as much as I can, but at the same time, I think it’s good to kind of be cut down so you realize that it’s not all great.” Webb doesn’t have a big head about any of it. It’s as if he doesn’t believe that it means anything. It is clear he thinks he still has a ways to go before he deserves a pat on the back.

Though Webb feels his musical journey is nowhere near complete, his followup album, Everything Is Forgotten, makes for a beautifully savory second release. The tracks flow effortlessly between one another, creating a dynamic masterpiece that rarely falters. “Drink Wine” shakily opens the record with the consistent sequenced vibrato of a synthesizer. The song teeters on neurosis, aggravating a 5 a.m.-disco-ball-curated dance party. “Ubu” unapologetically scolds an old friend—by far one of the most explosive, catchy pop tracks on the album. Everything Is Forgotten glitters with synthesizers, booming bass and perfectly tracked drums while Webb’s vocals shine through more clearly than ever before.

Webb denies that the album fits into a specific genre. He states, “I’m coming to believe that genres are just a way to talk about [music,] and sometimes, it’s quite lazy.” He goes on to say, “Sometimes I can’t hone in on one specific thing. I guess it’s because I just naturally draw on all influences that I have.” Methyl Ethel refuse to be pigeonholed into one type of sound, and instead play off psych, pop, shoe-gaze and a number of other notable styles of music. Webb is influenced by art and challenges. He says, “Musically, what inspires me is trying to piece the puzzle together of trying to write a song, trying to piece together the sound texture, and making things difficult for yourself. Those sort of challenges are what inspire me.” The artistic components of his music create a full-bodied sound. Everything Is Forgotten highlights Webb’s creative diversity phenomenally.

Methyl Ethel will make their SLC debut at Kilby Court, which is coincidentally around the same time last year that they played the Treefort Festival experience in Boise. “We’ve never been to Salt Lake City because there was a blizzard, and we got snowed in and we couldn’t make it there,” says Webb. The three bandmates and their tour manager have checked Wikipedia for the details on the city says Webb. “Just as you roll in, you kind of get the stats,” he quietly chuckles.

Webb doubts that Perth will forever be where he settles between tours, even though he feels immensely inspired by his hometown. “I’m thinking of picking a city or picking somewhere to do a lot of writing to finish that next one [record],” he says. “I want to be able to have access to things that are inspiring or that will make me competitive enough to want to make great work. That’s the thing about Perth: There’s so many people [who] make great music that it’s easy to go out and see a show and go straight home and want to work on music.” Webb’s seclusion plays a large role in his recording process. “I think having a deadline, having a space to go to to do it, is the way to go for me. I think space plays a large part in getting my juices flowing.” He laughs when he can’t think of a better term than “getting his juices flowing.” His laugh is infectious. It fills the room and makes it easy to understand why his music is equally likable.

Methyl Ethel have begun to master what makes an epic pop record. Under the guidance of their label, 4AD, and producer James Ford, Everything Is Forgotten is an undeniable success. After another world tour under Methyl Ethel’s belt, their live show will be polished and prepared. Salt Lake City, we will see you at Kilby on April 8. Pick up a copy of their album at the show or online.