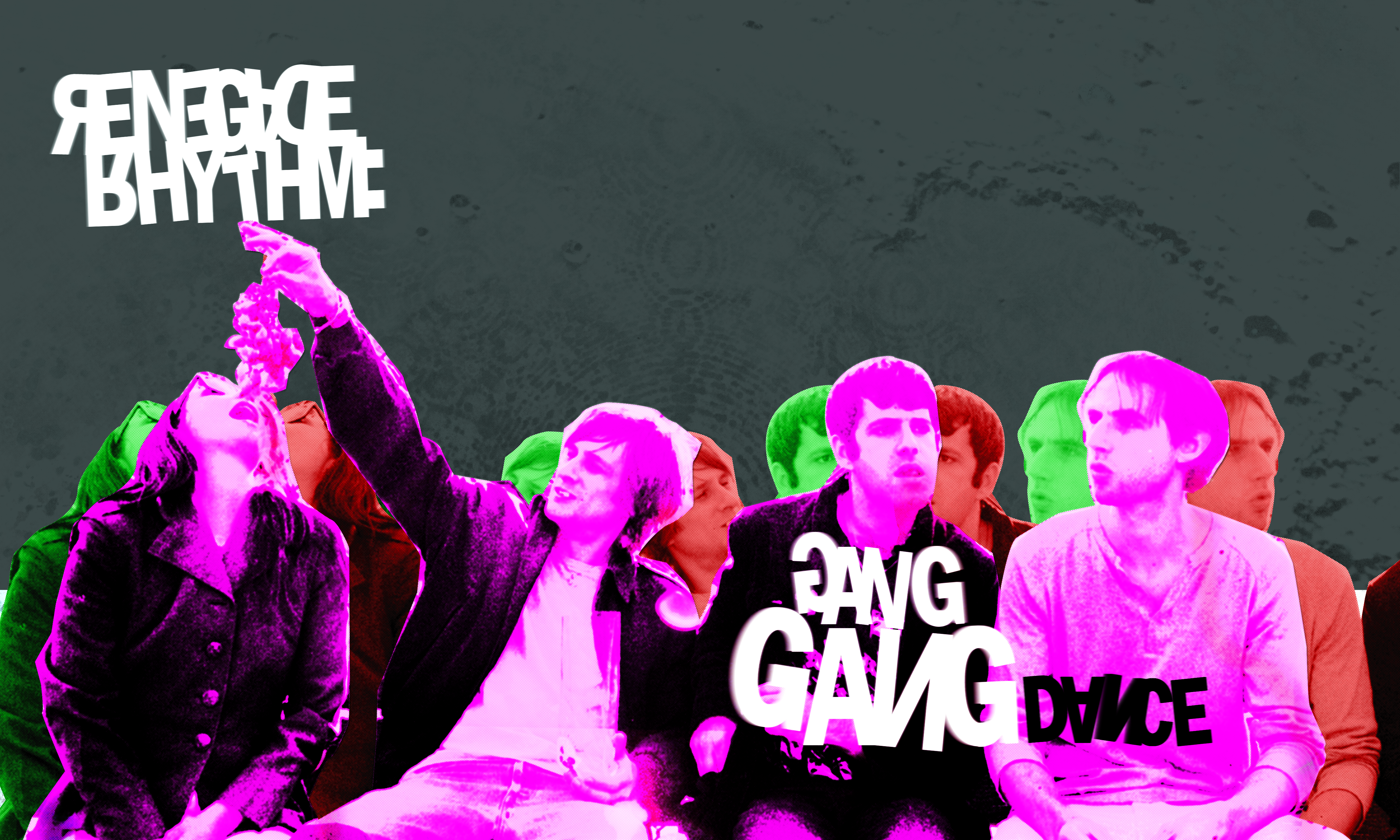 Popular modern music has been having a bit of a downfall lately. From The Futureheads to the Arctic Monkeys, there is an excess of bands that picked up the recent issue of Rolling Stone, heard The Fall for the first time and consequently have started playing music that sounds like “just another post-punk band.” Fortunately, once in a blue moon, there are groups that go beyond this banal brand of Xerox-machine music and permanently carve their own message in music history. One such group is Gang Gang Dance.

“[Modern music is] relying more on a vibe rather than going through the motions,” says Brian DeGraw, keyboardist for Gang Gang Dance. DeGraw had met Tim DeWitt, guitarist for Gang Gang Dance, after both had moved to DC around ’93, intrigued by the infamous local music scene and their sheer desire to make music. DeWitt was then working at Tower Records and DeGraw was stealing from them. DeGraw and DeWitt formed their first project together, Cranium, and moved to New York. Shortly thereafter, the band dissolved but not before meeting Liz Bougatsos, whose then-band Russia had recently gigged with Cranium. They rounded out their quartet by recruiting Josh Diamond, who ended up in Harmony Korine’s shit-folk ensemble Ssab Songs, who DeGraw and DeWitt played improv shows with, just having fun. They officially adopted the moniker Gang Gang Dance after playing their first show on Halloween sometime in 2001.

Interestingly, they had a fifth member, Nathan Maddox, but he died in between the recording of their first and second albums (Gang Gang Dance and God’s Money) after being struck by lightening. While DeGraw could be seen as the defacto leader in the group, he contends that this is not the case, and if anything, their deceased fifth member leads the group. “As far as we are concerned, it is all about everyone being completely individual in the band. There is no real group decision ever really being made about how the band is supposed to sound,” contends DeGraw.

Gang Gang Dance’s musical sensibility focuses more on creating emotion rather than a stable catalog. The traditional music press has tried to pigeonhole the band’s sound as “neo-primal” or “neo-tribal” in light of their effort. But what do those terms mean besides a banal categorization of sound so that people who don’t read Vice Magazine can digest what is really going on. “I don’t know what [neo-primal/neo-tribal] means. Spiritual, definitely. Ceremonial, sure. That’s what it is to me … it is not anything other than that to me. It’s been so long, bands trying to be bands, there is no spirituality in that; it’s trying too hard,” DeGraw muses. At any rate, their sound is a ritualistic crock pot of fused rhythm, cacophonic guitar loops and counter-pitched keyboards all underscored by psychedelic vocals. In other words, it’s what would happen if Fela Kuti and Cateano Veloso got in a fight and Eric Dolphy was refereeing it.

“A lot of times when we play, we try to make a set of something and then we realize, ‘Why do we even do this? We should be making film soundtracks,’” says DeGraw. Retina Riddim is the band’s latest offering, but not their newest album. It was produced and created solely by Brian DeGraw, but with approval from the rest of the band. “It’s not our new record; I saw it as a random project where I could experiment and try something different,” says DeGraw. The difference is the concept and execution of the project. Instead of a normal “solo” album in which someone would write songs and then record a proper studio album, DeGraw opted instead for a cut-and-paste style that uses visual tools instead of audio ones for its creation.

The DVD, with accompanying album, is an audio/visual maelstrom of bits and pieces culled from DeGraw’s camera while on tour with Gang Gang Dance in 2005. He would record everything from sound checks and live shows, to band member Josh Diamond playing violin in a field. “It was a different process to try,” says DeGraw, who edited both audio and video sequences in Final Cut Pro. The DVD is a stand-alone project whose accompanying audio buddy is not a soundtrack to the “film” but a separate entity all its own. “The audio CD is like a bonus that comes with the DVD,” responds DeGraw. “It’s not a huge departure, but just a huge progression. It’s really rhythm/beat-oriented. It’s tighter. The pieces are a lot more thought-out than the last record. I think it is going to be more an epic thing,” DeGraw says about the latest, as yet untitled, Gang Gang Dance album. “We have been making this record for a year. We have six or seven hours’ worth of material to edit down,” DeGraw enthusiastically announces. The new album will be epic; epic in the Manowar sense or epic in the My Bloody Valentine use of the word is anybody’s guess.

Any way you jump-rope, Gang Gang Dance is not your average Yeah Yeah Yeahs neo-no-wave dance band or your typical high-on-hype, low-on-originality Bloc Party. Retina Riddim, Brian DeGraw’s inner monologue speaking, will be out May 22 on the Social Registry label. Look for the “real” new album later this year.