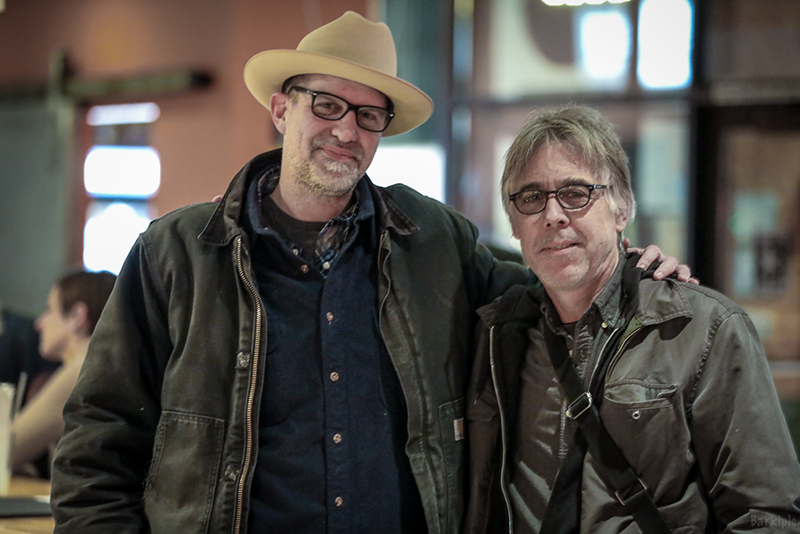 Resurrecting Deseret’s Son: A Celebration of the Life, Music and Art of Bob Moss

According to Henry Miller, “The function of the artist is to wake us up, to stimulate our imagination.” The backbone of the creation of a work of art, a musical piece or the written word is faith. Enthusiasm may ebb and flow, but if the creator believes, then that is when miracles occur. In conducting interviews to write about Bob Moss, the undercurrent of faith was a strong one. The words that came from his friends to describe Bob were affirmations of the strength of his spirit and the reflection of personality in his art, whether it be visual or musical. His presence in Salt Lake City was one that wasn’t overt or overbearing. His was subtle, humorous and quixotic all in the same breath. His impracticality and inability to live life within the dogmatic confines of a city dominated by a different kind of faith (the one that celebrates conformity, prudence and divine providence) made him stand out and be loved by those who “got” his quirky sense of humor and spirit. He lived to create. He worked as though he knew his time here wasn’t going to be long. His art was underwritten with his life, and that is the mark of a true creator. Bob passed away in 2011, but his spirit has lived on in his works. To celebrate the artist, Mike Kirkland and Bad Brad Wheeler collaborated with a number of local artists to release Son of Deseret, a tribute to the music of Bob Moss.

The album contains 24 tracks that are as varied and special as Bob’s personality. To listen to each is to journey through a vast catalog written by a man who was a traveler. His love of all things interesting and unexplored flow through his songs. The interpretations of these songs give new perspectives, range and dynamic to the stark and simple tunes written most often on his prized banjo. The haunting opening track, “True Love is Hard to Find” by Chubby Bunny, is a deceptively feel-good pop song with an undercurrent of darkness in the lyrics. Kirkland says, “One thing that was really important to me was to get some female voices involved. Tracy [Medley], Angie [Midgley], Audrey Zella Smith and Heidi Belka, they really brought so much to the songs. Their tracks are amazing. I was overwhelmed with how good this all turned out.” Wheeler’s take on it is that “I can’t help but think when I hear these songs, ‘What would Bob be thinking?’” he says. “I can just see him sitting there smiling and saying, ‘Oh! I never thought of it like that before!’ ‘Wow! Eli [Morrison] got involved!’ I cried when I heard the Chubby Bunny song. It really was an amazing thing to hear their interpretation of it. It just sounded so pretty. I think that sometimes people just didn’t give Bob a chance. It was because of his quirkiness. Some people just loved that about him. It depended on the person. But to hear people give his music that chance, it made me really happy.” The album’s genesis came from the gathering of friends in Kirkland’s back yard. Playing and singing Moss’ songs spawned two tributes to him, one musical and one visual that came from a place of love and missing someone who had affected the lives of the creative people he had encountered along the way. The album originally began as a dream Wheeler had about doing a performance à la David Byrne’s True Stories. “It started when I had this dream,” says Wheeler. “I started thinking about Bob. This dream came about. We were all in pretty cowboy suits, cowboy hats, and we were singing in front of fake cactuses. It was like that. In my dream, we were all playing his songs. I could see giant pictures of Bob flashing behind us. It just felt like I needed to tell Mike about it, and I thought we needed to do something about it.” I can feel his enthusiasm as he continues to say, “I felt, as an artist, how else can we converse with Bob now that he’s gone? We needed to celebrate his art. Put the notes back into the air. We needed to put the words back into people’s mouths, and that’s how it came about.”

Kirkland describes the early idea and how it developed from a one-time performance to a two-volume album: “It was more complicated than that, in a way, but not really much more complicated,” he says. “There were three or four people who were really into doing a tribute to Bob, but I was waiting for an idea of what to do. Brad’s concept brought it together. It was really Brad and Aldine Strychnine and Joe Judd that put this little group together with the idea of doing a performance like Brad had dreamed up. With schedules and stuff, it wasn’t happening the way we wanted it to happen, so we thought it would be better as a recording. That way, people could come over at their leisure, arrange the songs in the structure that they thought would be a good way to play it out. It worked better that way. The thing was, when I heard those first recordings, I thought we needed to have other voices involved. We needed other people.”

Then they started hearing from people. “Greg [Midgley], Davey [Parrish] [and] Eli had heard the tracks we had done, and they wanted to be a part and do their own take on the music,” says Kirkland. “It really did start getting momentum at that point.”

At the same time, Trent Call began developing the concept of visual artists “covering” the works of Bob Moss. Kirkland says, “That was an interesting thing. It came from an idea that musical artists cover one another, but it never happens in the visual-art realm. ‘Covering’ another artist’s work isn’t really a thing. I think Bob may have been more well-known for his visual art than he was for his music in Salt Lake. So, Trent has coordinated all of that aspect of it.” The two tributes will see an official release together during Gallery Stroll on Friday, Jan. 20. Covering Moss – A Bob Moss Visual Art Tribute will feature works by Salt Lake artists, and opening-night festivities go from 6 to 9 p.m., with the exhibit running up until Feb. 13. God Hates Robots gallery is located at 314 W. Broadway, Ste. 250, in downtown Salt Lake. The album Son of Deseret: A Bob Moss Tribute will be available at the show. Come down and celebrate the life and works of a man who lived as a true original.

7. “You Have A Pretty Bummy” – Timechimp (featuring Davey Parish)