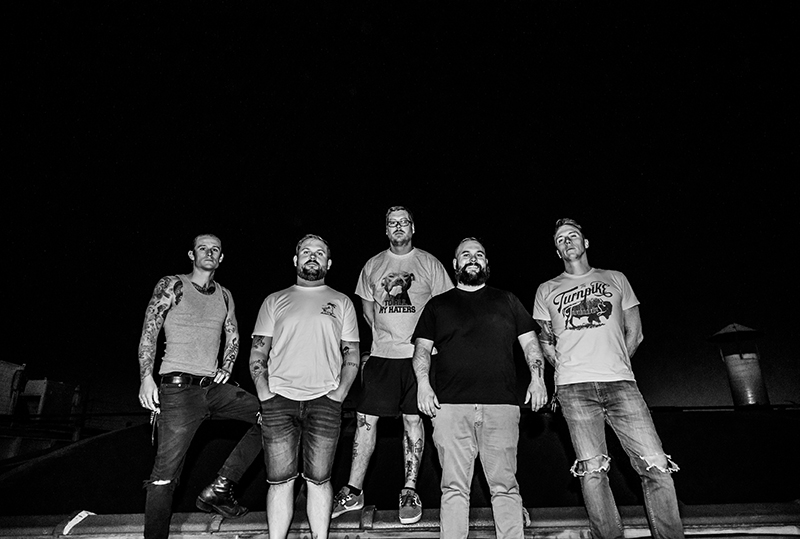 Returning to Escapist Fiction: I Am the Ocean

Escapist Fiction is the 2009 release from Salt Lake City–based post-hardcore group I Am the Ocean. It opens with a fury of guitar riffs, double bass pedals and gritty vocals, recalling a time when bands such as Circa Survive and Everytime I Die reigned. I Am the Ocean, who in 2009 consisted of vocalist Dreu Hudson, guitarists Eric Rose and Adam Virostko, bassist Jeremy Conder and drummer Taylor Orton (as well as the late tour dog, Scribble Jackson), toured around America, representing the best of what the Salt Lake City music scene had to offer. Today, as the same group who created the album revisits it for the upcoming 10-year anniversary show, they recall their touring days with nostalgia, joking about “baby birding” shots at bars to friends who forgot IDs, chasing Scribble Jackson across the Pacific Coast Highway, and recording the album that continues to hold intense meaning for each of them, 10 years later.

For past and current members of I Am the Ocean, Escapist Fiction remains one of the biggest feats in their musical careers.“I’m pretty sure it changed all of our outlooks on the way we write music and record,” says Rose, who had left the band prior to recording Escapist Fiction, but was involved in the recording process. While Rose and Orton were able to head back to Salt Lake City after a few weeks, Hudson, Conder and Virostko ended staying two months at Interlaced Audio in Portland during the recording, sleeping on floors and recording only after other bands and artists had finished with their booked time. Conder recalls the frustration of going way over schedule and wanting to just be done with it.

“[Escapist Fiction] is a very beautiful version of how we all thought it should be.”

Conder says, “We had put so much into this and worked so hard on it. We were behind schedule, we were so broke and hungry. If we left, this wouldn’t have gotten finished. That day, that thing was a nightmare. Today, it’s like, people hate the marathon at the end of the marathon, but afterwards they’re like ‘I went on a fucking marathon.’”

Holding up as an emotionally charged, instrumentally and lyrically intricate album for the last decade, Escapist Fiction attests to just how labor-intensive the recording process was for I Am the Ocean. “It set the tone for the rest of our lives … I don’t think any of us had worked that hard on any one thing ever before,” says Conder. While the group is reworking songs for the anniversary show, Escapist Fiction serves as a sort of time capsule for what each member of I Am the Ocean was going through during recording. “[It was] the hardest I’ve ever worked on an artistic piece, the most creatively draining,” says Hudson, who considers this album to contain some of his best songwriting. “I wrung myself the fuck out into it.” For Virostko, who has gone on to play with Layton-based post-hardcore band Get Scared, “The goal was … to write this record and have someone be like, ‘Damn, that’s worthy.’ [Escapist Fiction] is a very beautiful version of how we all thought it should be,” he says.

“[Escapist Fiction] set the tone for the rest of our lives … I don’t think any of us had worked that hard on any one thing ever before.”

Bringing together the same lineup that created Escapist Fiction was something that came naturally to the group. Revisiting the songs 10 years later has changed the writing and structure of what I Am the Ocean will perform live at the upcoming show, which Hudson credits to working with other musicians over the years, honing in on musicianship and songwriting. Virostko tells of recently leaving the studio for only a few minutes and coming back to a completely reworked song. “I came back from getting some coffee, and there were decisions that were made,” he says, “but what the song became, I’m totally stoked that I didn’t have anything to do with it. Because now it is what it is, and it’s the dopest shit ever.”

While the focus for now is putting on a killer show with Portland-based Shelter Red (whose guitarist, Stephan Hawkes, had a direct hand in recording Escapist Fiction) and Sunsleeper, the chemistry between the five involved with Escapist Fiction is something undeniable, which Hudson hints might spark into something more in the future: “We’ve got our sights pretty firmly set on this show and seeing what happens from there. All I know is that I’ve definitely not written my last song with any of these people,” he says.

“All I know is that I’ve definitely not written my last song with any of these people.”

While I Am the Ocean is still a band today, Orton, who is part of the current incarnation of the band says, “We are docked right now. People are hanging out, but we’re not sailing.” Despite not touring, I Am the Ocean are setting their intentions for their upcoming show to fall more in line with their “road dog” mindset: “I expect to end the performance with a migraine and the next morning with a hangover. I expect to pack the fucking house at Urban Lounge,” says Hudson.

The Escapist Fiction 10-year anniversary show will be at Urban Lounge, Saturday, Oct. 12, at 8 p.m. with Shelter Red and Sunsleeper. Escapist Fiction can be found on Spotify as well as on Bandcamp at iamtheocean.bandcamp.com.