00:00 / 16:39
Spotify Stitcher
RSS Feed
Share
Link
Embed
The conflict between the devil and all that is considered good is never-ending. Musician and filmmaker Rob Zombie has become a modern media icon by writing and performing music and films exploiting that conflict—horror is his muse. Zombie is planning a spring invasion that will feature a new studio album, a feature film and an accompanying novel. 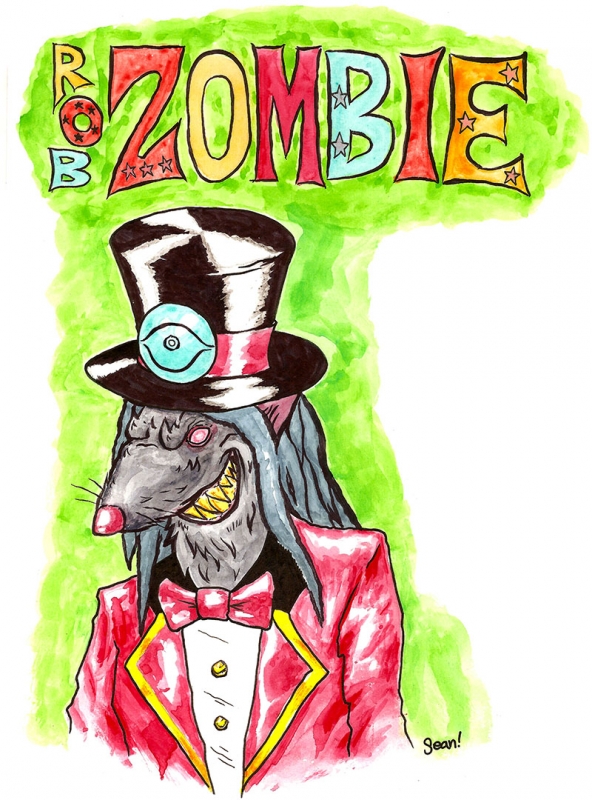 Board up the windows. Grab your broomstick. Stash the ammo. There is an imminent Zombie invasion coming.

The conflict between the devil and all that is considered good is never-ending. Musician and filmmaker Rob Zombie has become a modern media icon by writing and performing music and films exploiting that conflict—horror is his muse. Zombie is planning a spring invasion that will feature a new studio album, a feature film and an accompanying novel.

The album, Venomous Rat Regeneration Vendor, and the film, The Lords of Salem, have kept the heavy metal star busy. Producing two big projects at the same time is a hefty task. Zombie says that in the past, his method was to make an album and go on tour, then focus exclusively on filmmaking. Recently, he’s been trying to do both simultaneously. “I wanted to do both because I was finding people seem to have shorter and shorter memories. When I would shut down the music for two years to do a movie, it felt like every time I fired [the music] back up, it was harder,” he says. “The momentum becomes greater when you keep it going.”

Zombie didn’t have much to say about Venomous Rat Regeneration Vendor, which will be released April 23 on T-Boy/UMe Records. “When you create these things, you don’t know how to describe them … You’re so close on your own sometimes,” he says.

The first person other than the band to hear the album was his wife, Sheri Moon Zombie—a familiar face to fans of Zombie’s films, as she’s played significant roles in all of his movies, and is the lead in Lords of Salem. Zombie said his wife’s reaction to the new record was straightforward. Moon Zombie detailed it as an updated version of classic White Zombie tunes—a nice mix of the best of the old and the new. “I trust her opinion, so I guess that’s how I would describe it,” he says.

Venomous Rat Regeneration Vendor has an anthemic and catchy quality to it. Lyrically and musically, Zombie is good at driving his upbeat and evil tunes into the skulls of his fans. The lyrical style of highly repetitive choruses combined with headbang beats and guitar riffs appeal to his many fans. Zombie talked about the mixed reviews of his last albums since his hugely successful 1998 solo debut, Hellbilly Deluxe. “I think about these things a lot—I think about my own career, and I watch other people’s careers,” he says. “Things always go in cycles. You see it all the time for no apparent reason, whether it’s U2 or Ozzy. I’ve had those kind of moments where people have sort of ignored these records and suddenly they focus on this [new] record. That doesn’t mean the other records are better or worse. Things just sort of go like that.”

Zombie has always managed to make his influences noted from his love of classic monster movies to the ’70s-style exploitation flicks or ’80s hack n’ slash, gore and tits gratuity. The Lords of Salem pays homage to different sources while retaining Zombie’s knack for being original. The film’s strengths are its interesting characters, visuals, notable absence of any CGI animation and a stunning soundtrack crafted by Zombie’s guitarist, John 5.

The film—written, directed and produced by Zombie—is his third original movie and fifth overall. Not only is it dark, but it hits heavy on many notes of differing horror staples including witches, Satanism, the occult, drug addiction, music, American history and religion.

“It’s very different from the other films [I’ve made], but, truthfully, loving it or hating it has been the reaction to every single movie,” Zombie says. “I’ve always thought those are the only two reactions you can strive for—I certainly don’t want to strive for someone going, ‘Eh, it was all right.’ I’d rather have somebody say, ‘This is my favorite movie of all time,’ or ‘This is the biggest piece of crap I’ve ever had to sit through.’”

The Lords of Salem follows radio DJ Heidi Hawthorne, a recovering drug addict rebuilding her life. A strange vinyl record personally addressed to her comes from a band described only as “The Lords.” When the record is played, its effects wreak havoc on Heidi physically and, more so, emotionally. A hidden history becomes uncovered. Heidi is a descendant of Nathaniel Hawthorne, who burned a coven of witches alive in 1600s Salem. The witches put a curse on the women of Salem, specifically the descendants of Hawthorne.

“Two things change with [Heidi]: Her apartment starts off lit a certain way and meticulously clean—one of the ways she deals with her addiction OCD personality, so everything has to be perfect and her clothes are all brightly colored, and as the movie progresses, the apartment gets more misplaced-looking until it’s completely destroyed, and her clothes do, too—they get darker and drabber as the movie continues. I didn’t want to make it too obvious, but I wanted it to be enough,” says Zombie.

Possibly the strongest moments of The Lords of Salem come from its cast. Great actresses take on lead and key roles. The obvious reason for the women in lead roles is the film’s context of the witches of Salem in the 1600s, burned at the stake putting a curse on the women of Salem, Mass. The context of femininity in true Satanism and the occult is also a factor—it’s a strong theme in the very real worldviews of the true subject matter.

Casting has always been a crucial part of Zombie’s filmmaking process. Main characters in The Devil’s Rejects and House of 1000 Corpses who made huge impacts in the films seemed to come out of nowhere. The role of Otis in the films played by the relatively obscure Bill Mosely or the hell-bent on revenge Sheriff Wydell (William Forsythe) would likely not have had the same impact if portrayed by other actors.

For The Lords of Salem, Zombie got some horror greats as well as some relative unknowns. These include Patrica Quinn (The Rocky Horror Picture Show), Dee Wallace—known for her role in E.T.—and Critters actress Judy Geeson as the modern witch coven trio of Salem.

Geeson has many screen moments that will hit the viewer hard in unexpected and uncomfortable ways. 1600s witch coven leader Margret Morgan, played by Meg Foster (They Live), is initially portrayed in flashbacks of the 1600s and creeps her way into modern-day Salem in different forms, providing not only a creepy performance, but also some scary visuals with her unique, natural eye color. Sheri Moon Zombie in the lead, a fan/critic love-or-hate actress, gives, easily, her best film performance.

“This movie in particular, even more than my other ones, I’m trying to make things that last so that if you watch it a second time, you go, ‘Wait a minute, I didn’t notice that thing was over there.’ Sometimes you see a movie and it can be really entertaining, but it feels like, ‘I pretty much got it—I don’t ever need to see that movie again,’” says Zombie.

When it comes to modern horror in film, there aren’t many masters. It feels like the filmmakers who impact us in horror make movies that lead us to question the supernatural, or films that let us make sense of the horror and complexities of life. A movie quote from the 1963 version of The Haunting also plays as the intro of a classic White Zombie song, “Super-Charger Heaven”: “Look, I know the supernatural is something that isn’t supposed to happen, but it does happen.” It’s the appeal of horror films. “Everything I write becomes personal to me. In a sense, every character I create is me in a different way or somebody I know,” says Zombie.

The Lords of Salem is scheduled for release April 19. Zombie and author B.K. Evenson wrote the literary adaptation of The Lords of Salem—which, in essence, is the director’s cut of the theatrical film. The novel is available now through Grand Central Publishing.

As far as Zombie’s music, it stands alone. Zombie remains a major influence in rock and heavy metal music. White Zombie came to the limelight when the metal of the ’80s was dying and grunge rock was being born—nu-metal would soon follow. Zombie’s musical impact (from band to solo artist) with the audience stems from the feeling that his style is an antithesis of grunge rock, but also not quite metal, giving it a less niche-driven audience. There’s a reason you can buy a T-shirt that says Rob Mother Fucking Zombie with disfigured images of the rocker. You don’t have to like his music or movies, but there is no escaping the fact Zombie’s not going away—and his impact has already taken root.