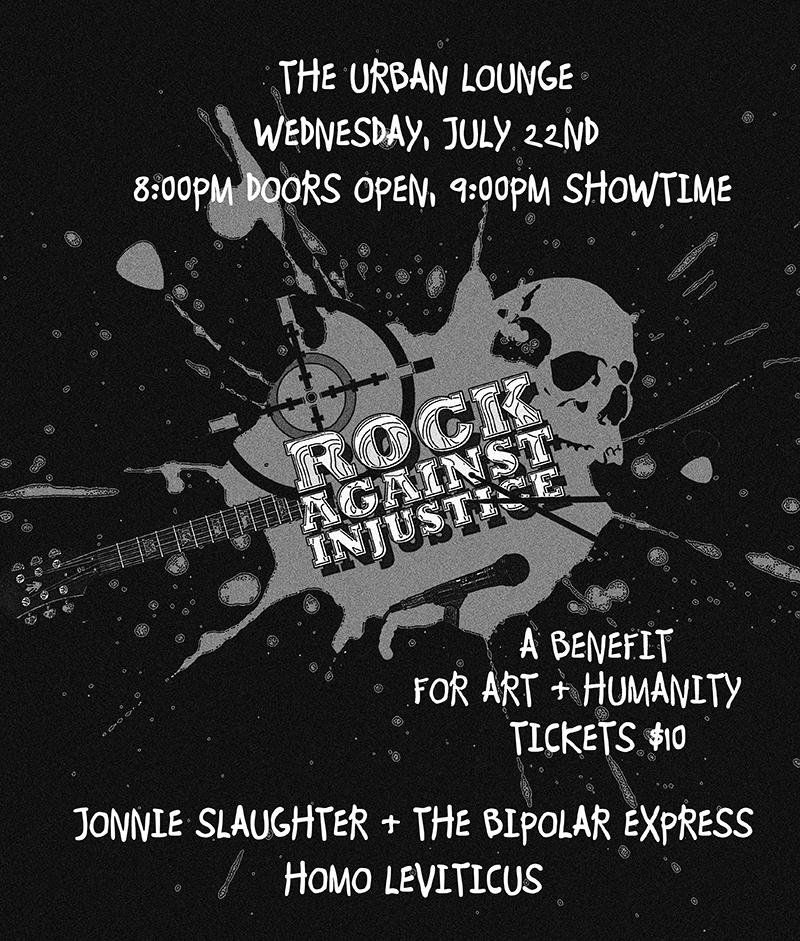 East High School art teacher Jennifer Mccoy has organized the Rock Against Injustice concert to raise money for workshops promoting the powerful combination of the creative arts and social justice. “The event is helping to fund extra money I need for a grant that I’ve applied for next year with … the Center for Documentary, Expression and Arts” says Mccoy. “Lesley Kelen, who runs it … he approached me about bringing in a couple of visiting artists who are activists.” Mccoy and Lesley are hoping to raise at least $7,000 to get the grant from the National Endowment for the Arts to help fund two-month-long workshops to be led by artists Lily Havey and Ruby Chacon.

The latter artist is perhaps best known for standing up for social equality and her mural work that describes the struggle of everyday life from people all over. Some of her more recent work can be found at Horizonte Instruction and Training Center. Havey—who spent a few of years in her early childhood in Japanese internment camps during WWII— writes poetry and creates water color paintings about her experiences in those camps. “I think that’ll be fantastic at showing the kids … how to use your personal experiences and things you feel passionate about to write about and make artwork,” says Mccoy. “So it has to with social justice and getting the kids more aware of what is going on around them, getting them to be more expressive—expressing their emotions in a positive way.”

With regard to defining an injustice that the Rock Against Injustice concert is supposed to be highlighting, that definition will remain open. McCoy suggests that the concert’s purpose is to bring awareness to her students about injustices all over the world through raising money for the social justice workshops. The kids who take the workshops will learn the history of those who have suffered injustice, and through this newfound awareness, they will be able to address what they have learned in a positive way—whether it is through activism or other means.

So far, the reception to bringing in artists to raise social awareness has been positive at East High School. Mccoy speaks fondly of the teachers at East High School who do “amazing things,” especially English teacher Rebecca Richardson who has been highly involved in helping the families of immigrant students assimilate into mainstream society. Another individual of note is Principal Dr. Paul Segers, who has historically been supportive of social-awareness programs at East High School, has recently been transferred to administer West High School.

Mccoy defends the importance of these workshops for her students. “Art is a universal language,” says Mccoy. “People say math is, and I kind of get that, but you have to get math first before it can be a universal language. Art is fairly expressive. All of the students that I’ve had … that are … here [and] they don’t speak English yet … it’s very obvious that they are very new to the United States. They love art [and] they love drawing. They may not get the assignment that I’m giving, but it doesn’t really matter, right then, because they are doing something that engages them and takes them into a safe place.” The social-justice workshops will be integrated into regular courses and coincide with Mccoy’s established lesson plans—because she has to still give tests at the end of the year. Despite that, the workshops will allow students to expand their range of study for their assignments. When asked about the possibility of more benefit concerts, Mccoy expressed an interest in bringing in graffiti artists, suggesting that many of these artists are activists and that they would be able to relate to her students.

It’s not often enough that the words “Rock Against Injustice” light up the night sky. The passion for teaching that Mccoy is commendable—it is out of the box and remarkably progressive. I mean art and social justice, who would have thought they would make such an important and radical pair? Irony aside, Mccoys ideas are what is desperately needed for the next generation who will be inheriting an unstable world. So, it is important that the community responds with support. Leaving SLUG with some words of wisdom and encouragement, Mccoy says. “I think it’s important that if you’re passionate about stuff that you do something about it…otherwise you just kind of stagnate.”

Rock Against Injustice is set for tomorrow, July 22, at Urban Lounge. Doors will be at 8 p.m., and the cost to get in is $10. There will also be art for sale at the gig. All proceeds will go to support getting the grant from the National Endowment for the Arts. The lineup features Johnny Slaughter, The Bipolar Express and Homo Leviticus. It seems this will be a stellar night to support a good cause and should not be missed.