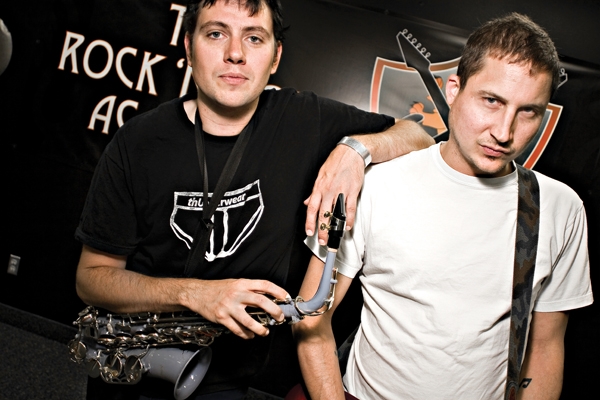 Playing music should be fun—it shouldn’t feel like you are doing chores or homework. At least that’s how Dave Payne and Mike Sartain feel about things.  “We teach students how to enjoy music for the rest of their lives,” says Payne.  At the Rock ‘n’ Roll Academy the list of rules is short. The most striking of them is “Mandatory Pleasure and Happiness.”  Payne, Sartain and the rest of the teachers at Rock ‘n’ Roll Academy have made it their mission to make sure that anyone who wants to rock has the opportunity.

Payne and Sartain are two local musicians who have been playing in various SLC bands for over a decade. Payne plays with The Red Bennies, Marvin Payne and the Gifted Seed, The Glinting Gems and many others, while Sartain plays with Starmy and performs as a solo musician. Both men were teachers at the Salt Lake City School of Rock location until it moved to Sandy. Unable to make the trek, several rock students found themselves without a school.  It was then that Sierra Wilson, former School of Rock student, suggested that Payne and Sartain start a rock and roll school of their own.  “We had always talked about starting a school of our own,” says Sartain, “and we had some pretty good ideas of how we would do it.”  Sierra Wilson brought more than suggestions to the table as well: her parents were willing to fund the academy if Payne and Sartain were willing to run it.

Payne and Sartain, along with other well known Salt Lake musicians Shane Asbridge  (The Wolfs, Vile Blue Shades, Laser Fang) and Greg Midgeley (The Rubes, Bronco) are able to provide students with more than an opportunity to rock. Students can learn to sing, play the guitar, drums, keyboard and more.  I got the impression that the Rock ‘n’ Roll Academy is willing to work with just about any instrument a student brings to the table. Madison Day, Rock’n’Roll Academy student, has been playing the piano in private lessons for years. Not only has she been livening up her piano jamming, but Payne has also been encouraging her to pick up the sax a bit more. “I like it here because we have fun and I can try anything,” she says of her experience at the academy.

After enrolling, students are grouped into bands according to age, ability and personality. To maintain an educational environment, the bands are called classes, Payne is referred to as “Principal Payne” and Sartain is “Professor Mike.” Payne says, “If a student has a hard time focusing, we’ll put them in a group with others who have the same struggles, this way they are all on the same level and are more productive.”  From there, students learn as a group. Individual lessons are also available, but are much more effective when coupled with the group learning environment. “Playing in the groups allows the students to really share and understand what they are learning in the private lessons—they are creating and feeding off of each other,” says Sartain. “And they get to be in a band.  How many eight year olds do you know in a band?”

By writing their own music, the students have to do more than learn a part in a song, they have to create their own part. They learn to embrace the music as a tool for expression, not just as a tool to play something that someone else once felt.  “They aren’t just learning that one Metallica solo that they’ll be playing for the rest of their lives that they don’t have any attachment to,” says Sartain.

The teachers really want to give the students the guidance and skills needed to have total creative control of the music, and as Payne says, “We use the original scores as a means of teaching the fundamentals of the music. This way, the students are expressing themselves through what they have learned.” They occasionally have to help out, but it is important that the students are able to take ownership of what they create. They write the lyrics, song titles and they even get to give their class a sweet name. Some examples of what the students have come up with are: Depraved Indifference, Purple Ambitions and Class Act. If you check out the Academy’s website you can hear some of their original compositions as well. I was expecting something a little more like the droning sounds of my middle school band class, but this is not the case. Each band plays incredibly creative songs with great talent. I really couldn’t believe what I was listening to.

The Rock ‘n’ Roll Academy holds standard school recitals in which the professors run the show and allow students to demonstrate how much they’ve learned. They also take it up one notch and give the classes the opportunity to put on a show. Payne says, “When the show comes around, the kids are in charge and get to take total control—I just try to stay out of their hair.” They’ve played a few festivals and play regular shows at Mo’s Neighborhood Grill.  “Each class has a set list that they work on throughout the course of their lessons. When they feel that they’ve got a song down we give them the opportunity to play it in a show,” says Sartain. “They only play what they want to play when they’re ready to play it.”

“What’s the most significant thing we can offer for the kids?” Payne often asks himself, “The program is oriented in a way where the kids are feeling like a part of something and they can be proud of themselves…the music doesn’t even matter, it’s about the students expressing themselves.”

Don’t be shy if you aren’t a kid either, the Rock ‘n’ Roll Academy serves all ages. “We teach students who are into their 40s. That’s when adults seem to get over being too cool to take music lessons and are looking for something fun to do,” Payne says. Adults are welcome to learn on all levels at the academy through private lessons, group lessons and even joining in on the shows.

According to the folks at the academy, they’ll teach you “music for the rest of your life,” regardless of your age. Visit rockandrollacademy.info to check out a list of upcoming performances and to find out more about their program.