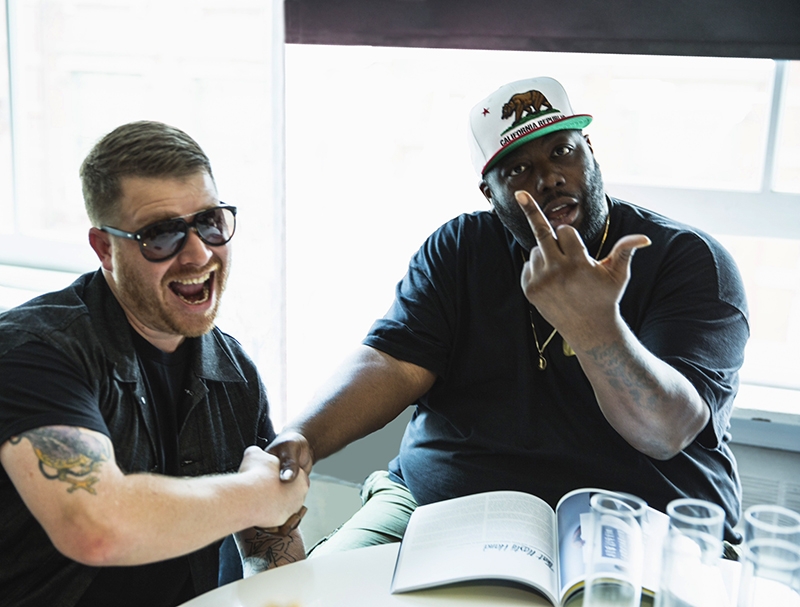 “Opening for the Wu is for real,” Killer Mike (Michael Render) tells SLUG in his boisterous Southern drawl. El-P recreates the experience, saying, “We walked into it assuming the crowd was there for Wu-Tang and we were just the opener. So the fact that we had 10,000 kids screaming our lyrics back to us was legitimately a surprise.” While the members of Run the Jewels were surprised by their overwhelmingly positive reception in Salt Lake City—opening for Wu-Tang Clan as part of the Twilight Concert Series this past summer—they probably should’ve expected it. After dropping their self-titled debut album in 2013, they became coveted festival performers and showed up on a lot of “best-of” lists at the end of the year. There’s a magic to Run the Jewels. There’s an energy and enthusiasm that is rarely found in hip-hop these days that makes it feel hard and dangerous, but also smart—and most importantly, a lot of goddamn fun. So really, it’s no surprise how well Run the Jewels fared in their first visit to Salt Lake City. “I was happy as a goddamn little girl,” Killer Mike says.

The unlikely pairing of Killer Mike and El-P started in 2012, when El, aka Jaime Meline, was approached to produce Killer Mike’s album R.A.P. Music. The pairing of Mike, a Southern rapper with ties to OutKast and T.I., and El-P, an underground rapper and producer known for his Public Enemy–meets-outer-space production style, seemed like an odd one to outsiders, but Mike and El were always confident in their chemistry. “We knew, when we teamed up, people were gonna say, ‘What the fuck are you talking about?’ But we also knew that when they heard it, we would never hear that shit again,” El-P says. Mike’s bombastic style proved to mesh perfectly with El-P’s thunderous-yet-spacey production. The pair hit it off both creatively and personally, and every single second of R.A.P. Music proved that the duo were simpatico. “There was magic there. We’re the same age. We have a lot of intersecting influences and a lot of parallels in our lives,” El-P says. Killer Mike added to this sentiment, saying, “It’s not always easy to fall into a groove, so when you do, you wanna stay there.”
So, they kept a good thing going. While on tour together in late 2012, El-P and Killer Mike began recording a few songs together that would eventually become the first Run the Jewels album. The duo thought of it as an intermediate project, something to hold them over until their next solo affairs. But when they played it for their friends, the reaction proved that they had something special. “When you do something cool, it’s cool. But when you do something cool and it works, it’s like, ‘Oh shit!’ And that’s the most beautiful thing about Run the Jewels—that ‘Oh shit!’ moment when we realized this was a real group,” Killer Mike says. The first Run the Jewels album was a beast, featuring El-P and Killer Mike at their fiercest. Packed to the brim with bravado, swagger and grime, it sounded like nothing else coming out of the rap game in 2013. El-P says, “This is music that would never happen with either one of us on our own.” Run the Jewels records are very much El and Mike being influenced by each other. “You’re hearing us coming closer to each other’s approaches and meeting somewhere in the middle. We wanted to honor and do our version of a classic rap group that we grew up with,” says El-P of groups like EPMD.
When it came time to create RTJ2, the group knew they had to step up their game. “Originally we said it was gonna be dirtier, harder, funnier, darker, and I thought that was good enough,” Killer Mike says. “At some point, it just became something else. I think it’s Run the Jewels evolved—[the] first time I heard the finished thing, I damn near wept. It’s a fuckin’ album.” RTJ2 is still dirty and raw, but it’s a definite progression in the group’s sound. El-P described it not as a giant leap, but as a hard step forward. He says, “Our hope is that people go into the record expecting to nod their head and maybe punch someone in the face to walking away from it, having actually felt something.” The album was released on Oct. 27, and is available for free download from Mass Appeal records.
Run the Jewels on record is one thing, but their live show is something else entirely. They proved that last summer, opening for Wu-Tang Clan, as they had the crowd chanting along with them and making the RTJ symbol with their fists and fingers. They’re the kind of group that can switch from mean muggin’ to old-school hip-hop dance moves on the fly and not lose any of their integrity. “When we get onstage, it’s just straight bananas, because we’re having a blast. I’m not even thinking when I’m up there. I just look to my right and see that big, goofy-ass grin on Michael Render’s face, and I know that I’m having the time of my life,” El-P says. Catch Run the Jewels when they perform at Urban Lounge on Nov. 17 with Ratking and Despot.