Back in 1994, there was no bigger band in my mind than New York City’s Into Another. When I learned that they were reuniting to play the Revelation Records anniversary shows in California this past summer and New York this fall, I was not only elated, but also dismayed, as my current financial situation would not allow me to attend any of the shows. I suppose that the following interview with founding member and vocalist Richie Birkenhead is somewhat of a consolation prize … and a damned good one, at that.

Running Into Walls: The Return of Into Another 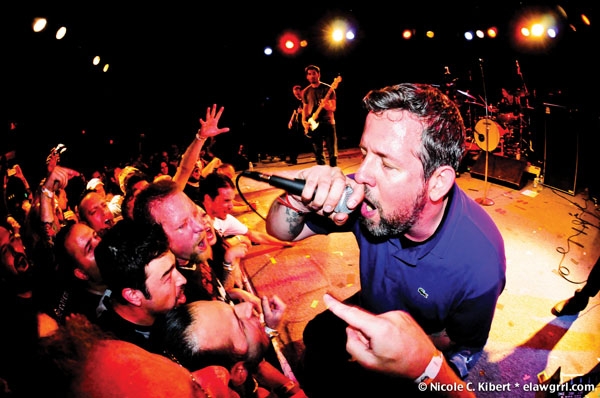 Since their untimely demise in 1997, Into Another has reuinted to play shows in California and New York. Photo: © Nicole C. Kibert * elawgrrl.com

Back in 1994, at the tender age of 17, there was no bigger band in my mind than New York City’s Into Another. At that time, I was a naïve, young, punk rock kid with a penchant for thrash metal and a somewhat closeted love of hardcore, but Into Another transcended all musical genres and affiliations I was aware of at the time. Hell, I got the band’s 11-pointed star logo tattooed—massively—on my forearm at the age of eighteen. I followed the band through their untimely demise circa 1997, and was sorely disappointed to learn that they had a fully recorded album that would never see a proper release. To this day, Into Another is a band that has influenced me on many different levels. When I learned that they were reuniting to play the Revelation Records anniversary shows in California this past summer and New York this fall, I was not only elated, but also dismayed, as my current financial situation would not allow me to attend any of the shows. I suppose that the following interview with founding member and vocalist Richie Birkenhead is somewhat of a consolation prize … and a damned good one, at that.

Into Another was founded in 1990 by vocalist and composer Richie Birkenhead and drummer Drew Thomas, both experienced musicians emerging from the then-slowly-dying New York “Youth Crew” movement, having spent time in hardcore bands such as Youth of Today, Bold and Underdog—all legends in their own right. “Drew and I were very close friends throughout the ‘hardcore years,’” says Birkenhead. “We played in different bands, but we shared a desire to create music that was not restricted by genre or by anything at all. It also helped that we had very similar tastes in music and, where we differed in tastes, we complemented one another artistically.” Birkenhead and Thomas began frequenting rehearsal and recording studios, and creating music in what Birkenhead refers to as “an almost stream-of-consciousness way,” while simultaneously seeking members to round out the band. They were soon joined by guitarist Peter Moses and bassist Tony Bono. “Peter came first, by way of recommendation, and we were absolutely blown away,” says Birkenhead. “Peter knew Tony, and Tony came in and ripped—the synergy was just magic.” The band’s first shows were in the fall of 1990 and, from the start, they drew a fiercely devout and passionate following, to quote Birkenhead. “We were doing something very real, and sometimes a bit jarring and unsettling,” he says. “You either loved or hated us. That’s still true and I wouldn’t have it any other way.”

As Birkenhead says, Into Another has always seemed to have an extremely passionate fanbase. In his estimation, this is for two reasons:  “One, we weren’t trying to be anything. Not metal, not hardcore or post-hardcore or alternative—we just were who we were” he says. “Two, we were creating something very visceral and raw, and thus, very touching and moving to those whom we reached.” Lyrically, Birkenhead says he had never made himself as “naked and vulnerable” as he did with Into Another. “I’ve neither held back nor contrived anything lyrically with this band,” he says. “I’ve poured out my pain, my joy, my wonder, my confusion, my desires, my anxiety, my revelations, my heart, and my soul.” Birkenhead admits that the high points of the initial existence of the band were virtually every minute they spent onstage or in the studio, and the low points were generally associated with business and record labels … and occasionally with egos and personalities.As previously alluded to, Into Another recorded—but never released—an album with the working title of Soul Control in the late 1990s. “As with all things Into Another,” Birkenhead says, “that unfinished album is either loved or hated (even among members of the band).” Incidentally, the album had many different titles thrown about. “I also called it Hoarse Platitudes,” says Birkenhead. In a nutshell, the album never saw the light of day because the band sued their record label while the album was in progress, and Into Another was slowly disintegrating due to many different factors. “It’s tragic, really,” says Birkenhead.  “I love a lot of those songs—particularly “Ether (More Than Anything),” “That” and “(If) Only.” I’d love to finish mixing/mastering at some point and to release it properly.” Birkenhead confirms that, not only is the band “fully active” again, but future recording and touring is planned, and the band is attempting to finish the mixing and mastering of the Soul Control album for said proper release.

Tragically, original bassist Tony Bono passed away after a heart attack in May of 2002. When I learned of this, any hopes I harbored for the band to ever reunite were dashed. Bono was an integral part of what made Into Another so amazing in my mind, and I didn’t envision a way that the band could ever continue without him. It was nothing short of a jaw-dropping surprise to me when I learned that Into Another would, indeed, be reforming to play the Revelation Records 25th Anniversary Shows in California this past summer, and even more of a shock when shows in New York City in October were announced. “Brian (Balchack, guitar) and Reid (Black, bass) basically grabbed us and made it happen,” says Birkenhead.  “They reached out through their musical prowess and their desire to be part of this, and lit the fuse. We are forever beholden to them.” Balchack plays guitar in Southern California’s Ignite, and Black is the bassist for psych-rock stalwarts Innaway. The addition of these two, current musical projects and influences included, makes perfect sense for Into Another. “We each have such a broad scope of tastes,” says Birkenhead. “Everything from Bowie, The Beatles, Queen, Black Sabbath, Pink Floyd and The Doors to Negative Approach, SSD and the Cro-Mags.” Adding a second guitarist well-versed in hardcore and a bassist with roots in psychedelic rock sums up the band’s influences in, essentially, two fell swoops. This, however, doesn’t discount the loss felt by Bono’s absence. “Sadly, we drifted apart,” says Birkenhead, when asked if he kept in regular contact with Bono after Into Another’s dissolution. “In addition to the regret I felt, and still feel, about that, my reaction was utter shock and deep sadness. Tony didn’t have an unkind bone in his body. He was a beautiful soul and a brilliant, brilliant artist.”

With great excitement, Birkenhead has confirmed that the band is once again fully active, as stated earlier in this narrative, and his closing comment instills hope in me for the chance of seeing the band live, at least one more time. “Thanks for ‘hearing’ me,” he says. “It’s been a pleasure. Come and be with us when we visit your hometown.” Indeed I will.

Into Another will be performing Dec. 13 at The Sinclair in Cambridge, Mass., Dec. 14 at The El ‘N Gee  in New London, Conn., Dec. 15 at Union Transfer in Philadelpha, Penn. and Dec. 16 at The Bowery Ballroom in New York. Check out more photos of their recent shows by Nicole C. Kibert at elawgrrl.com.