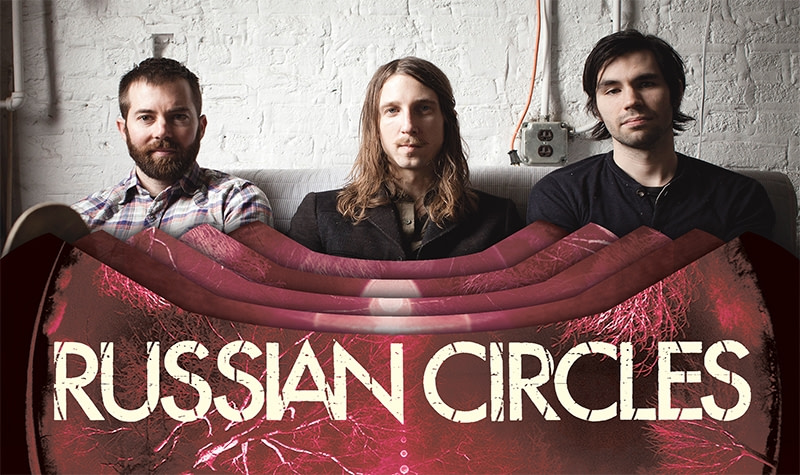 Russian Circles will bring their driving, devastating instrumental rock to The Great Saltair on Feb. 15.

Sprawling. Swirling. Ominous. Auspicious. Any number of multisyllabic words can be used to describe the music of Russian Circles, who have been creating dynamic instrumental music since 2004. The trio switches from heavy, discordant riffs to somber, reflective passages with ease, always retaining a sense of melody and drive that sometimes eludes other groups under the umbrella of post-rock. The band’s most recent album, 2011’s Empros, is Russian Circles’ most focused effort yet, featuring stripped-down instrumentation while maintaining their trademark sense of volume, blurring the lines between the darker and lighter aspects of the band’s sound—one track even features (gasp!) vocals. In anticipation of their performance at The Great Saltair on Feb. 15 (the band’s first stop in SLC since the release of Empros), SLUG spoke with bassist Brian Cook about the upcoming tour and what Russian Circles have in store for 2013.

SLUG: Russian Circles toured Australia and New Zealand last fall with Salt Lake’s own Eagle Twin. What was that experience like?
Cook: [Eagle Twin] is a band we respect and admire—I’ve been a fan of Iceburn forever. I was excited when Eagle Twin started up. [Touring with them] was just one of those things that made sense logistically and sonically. [Touring Australia] is a lot like touring the western United States because all the drives are really long. It’s cool because it’s a place where not a lot of bands go, so when a band like us—who plays in sort of a niche musical style—goes out there, a lot of people turn up for it, since it’s rare.

SLUG: This February, Russian Circles will be touring with Coheed and Cambria and Between the Buried and Me. How did this tour come about, and how does touring as a support act on a larger tour compare to touring as headliners in smaller rooms?
Cook: We had been approached by Between the Buried and Me to do a tour in January. But then the tour got canceled because they were offered a support slot for Coheed and Cambria. We thought, “Oh well, that’s just as well.” Originally, we weren’t planning to do any touring this winter. We were planning on hunkering down and writing and doing some demoing so we could record a new album this spring. Then, Coheed and Cambria approached us about opening for their tour in February, and we decided to go along with it. We haven’t actually done a support tour in a very long time. Over the last three albums, we’ve done less than a month’s worth of support dates. It’s kind of exciting. We’re used to playing people who have seen us before and playing the same venues. It’s like we’re a new band all of a sudden, playing for people who don’t know us.

SLUG: Some Russian Circles songs are very elaborate, but there are only three members in the band. How do you replicate some of the more complicated songs in a live setting, and do you keep your live show in mind when writing new music?
Cook: When we did Geneva, we really wanted to make a very elaborate, lush, orchestrated record. It was a very detail-oriented album. There were changes in pedal configurations in multiple parts of each song, and horns and strings and piano. It was a really fun and rewarding record to make, but when we took those songs out on the road and played them live, I always thought they felt a bit thin and empty by comparison. When we went into Empros, we made a conscious effort to make more of a barebones record. We still reworked a lot of stuff in the studio and made things more complicated than we intended, but we’re now very conscious of everything we write and how we’re going to play it live, because we don’t want to create material that we won’t be able to take out on the road.

SLUG: You mentioned that you plan on recording a new album this year. Do you have any songs written now? Is the direction any different from previous Russian Circles albums?
Cook:  We have bits and pieces floating around, but we don’t have any new songs that we’ll be playing on tour. I feel like we’re gravitating the most towards things that are a bit more unorthodox for us. We aren’t going to throw any curveballs where we put out an electronic record or a folk record or anything like that. The things that are most exciting to me right now are weirder-sounding things, so [the new record] might be a bit weirder sounding than things we’ve done in the past.

With each album, Russian Circles have truly progressed. The songs on Empros find the band channeling their most bitter of demons, but also celebrating the beauty of life. They are a band whose music truly can’t be given justice with words—it has to be heard, experienced, reflected on and possibly moshed to. Russian Circles will perform at The Great Saltair on Feb. 15—get there early or don’t go at all.