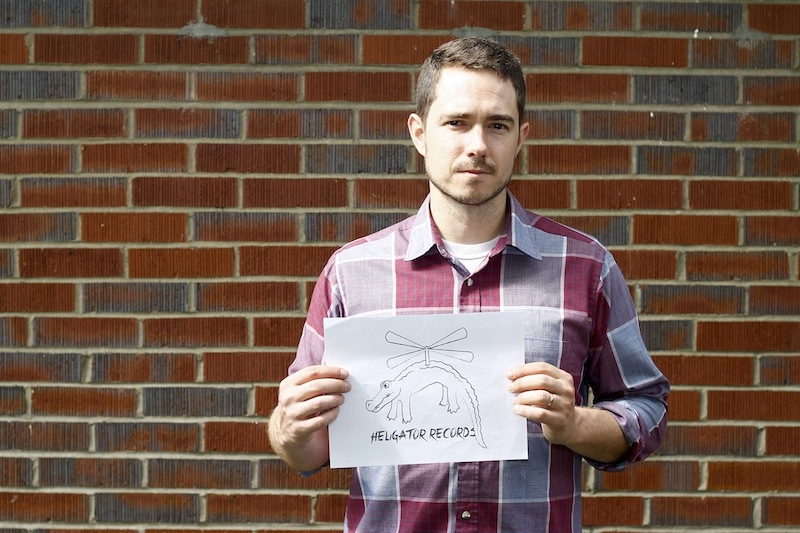 Ryan Hall didn’t let his time in Africa with the Peace Corps keep him from his duties running Tome to the Weather Machine, a music blog focusing on obscure, experimental and, often, Salt Lake City acts. Nor did he falter with his work curating the Goldrush Music Festival in Denver. Since his return to the States, he’s started his graduate degree in social work from the the University of Cincinnati and a record label that sounds more like a nonprofit than anything else. If I achieved one task from Hall’s list, I’d feel justified spending the rest of 2014 watching Netflix.Hall’s multileveled involvement with music and musicians started in 2009 with Tome. He started the blog, along with friend Crawford Philleo, without any big plans. Hall says, “It served as an outlet to process the insane amount of music I was listening to.” Starting out, the Tome covered whatever Hall and Philleo were listening to (Animal Hospital and Kevin Greenspon, for example), but it grew into a submission- based project.The Goldrush Music Festival was the brainchild of the Tome, and two other now-defunct blogs. Hall says, “The idea was to create a music festival in the fall that championed some of these lesser-known artists that each blog was writing about.” The first year, How To Dress Well and Candy Claws headlined, and Silver Antlers represented Salt Lake City.After the original Goldrush, the other two blogs dropped out and Philleo took over the festival. Hall says, “[Philleo] turned Goldrush into a festival that features acts that otherwise wouldn’t get a huge audience if they were to tour by themselves.” For that reason, they don’t try to stack the bill with well-known artists. According to Hall, the purpose of Goldrush is exploration and discovery. The crowd comes for the music. “People might have heard of one or two acts, then get their minds blown by something they’ve never heard of before, that they might never have heard in any context other than Goldrush,” Hall says.During his two years with the Peace Corps in Swaziland, Hall continued his role as the main contributor to the Tome. He says, “I thought I would have to quit for two years. But then I couldn’t. I found myself, any chance I got, on the Internet, going to the Tome’s inbox, downloading stuff and writing about it.” But, because of the Internet connection, which Hall describes as, “sporadic at best,” his involvement with Goldrush was limited during his time in Swaziland. He did stay involved, however, by writing press releases and the festival’s companion zine.

In Swaziland, Hall lived near a refugee camp. He met a local business owner/former refugee who wanted to help the camp by building a library. With physical help from the refugees and funds donated by the local business owner, Hall transformed a row of derelict buildings into a library. Hall says, “All the work was done by the refugees themselves, with me acting like I knew what I was doing, but really having no idea.” The process of taking something ruined and making something beautiful gave Hall a great sense of completion.

Hall had to return home soon after the library was finished, and he worried that the refugees wouldn’t be able to sustain it. Hall decided to start Heligator Records as a way to stay connected to this project that was so important to him, and he was also inspired by Chaz Prymek (of Lake Mary), who approached Hall about releasing an exclusive track for Goldrush. Hall says, “Heligator is a really good culmination of the major events in my life—starting the website, being involved in Goldrush, and then the work that I did as a Peace Corps volunteer.” Hall planned to digitally release an exclusive single every month with the profits funding the library in Swaziland. Hall says it’s been a success. “Your dollar really goes a long way there,” Hall says. He’s been able to send back enough money to pay for the library’s electricity, maintenance and a small stipend for the volunteer librarian. For now, Hall plans to keep the releases digital in order to keep the overhead as low as possible. Once he’s finished with grad school, he’ll think about producing something tangible—tapes, maybe. Since the label was created to maintain his connection to Swaziland, though, the overhead will probably remain low. Hall says, “For as long as it’s going to exist, Heligator is going to be a means to channel funds to the library.”

Both Goldrush and Heligator continue to feature primarily Salt Lake and Denver acts. Hall says, “It’s always been really important to me, as a former Salt Lake City resident, and as somebody who spent his formative years in Salt Lake City, to strengthen the relationship between Denver and Salt Lake.” He sees a great potential for the experimental music communities in both cities to partner up.

This year’s Goldrush, presumed to be the biggest yet, is taking place at two Denver venues which, Hall says, improve on the previous years. The festival features groups like Wolf Eyes, Mount Eerie and Good Willsmith, along with Salt Lake acts Braeyden Jae and Stag Hare. For more information about the 2014 Goldrush Festival, visit goldrushmusicfest.com. If you’re interested in getting your music reviewed or released by the Tome or Heligator Records, respectively, peruse tometotheweathermachine. com for where to send it.
Photos: