00:00 / 16:39
Spotify Stitcher
RSS Feed
Share
Link
Embed
“When it came to writing music, I was never technically trained. I picked up the guitar when I was 15 years old and started a band. We were fucking horrible. We ate the dirt and just got back up. You’re going to have a lot of big fails and people don’t want to see you succeed, but you can’t dwell on them, you just have to keep going and move forward.”

Salt Lake gets Aokified: an Interview with Steve Aoki. 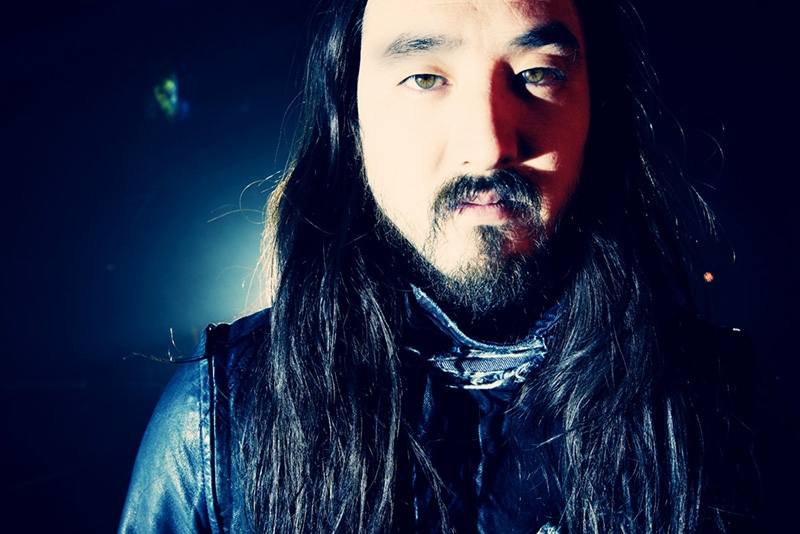 “Started from the bottom, now we’re here” could easily and should be the title of a Steve Aoki memoir, but hey, that’s only my input. As I ran (literally, thanks to my late train) to the SLUG office to conduct an interview with the man himself, gasping for air while I introduced myself over the phone and began my survey of questions, I couldn’t help but wonder how this man created an EDM empire that has Aokified the world and left it begging for more. In between running a record label, playing shows and festivals around the world, and collaborating with some of the biggest names in music, Aoki can be found baking cakes and manicuring his iconic facial hair in preparation for his Aokify America Tour starting this fall. Despite his busy schedule, he still had the time to sit and discuss everything from his past, to his present, to his future career and more.

Here at SLUG Mag, we thrive off of promoting and helping new artists in our area to succeed. When I told Aoki that and asked him what he would say to any of our local artist friends who are trying to make it big, he said, “When I started, I didn’t know what the next step was. Everyone’s got their different process of how they want to go about their music or art, but for me I, kind of learned as I went along. I think you need to have the determination to just get up and get things done.” Aoki has been creating electronic music since 2005, but started writing music and playing live instruments in 1993. “Throughout my whole childhood and college up until right before I was producing, I was already in bands and touring. That life was already a big part of what made me who I am now, so when I started writing music into a computer, the process was different, but it was a natural progression,” says Aoki of his transcendence into producing electronic music. “When it came to writing music, I was never technically trained. I picked up the guitar when I was 15 years old and started a band. We were fucking horrible. We ate the dirt and just got back up. You’re going to have a lot of big fails and people don’t want to see you succeed, but you can’t dwell on them, you just have to keep going and move forward.”

After hearing that Aoki got a lot of negative feedback on his work in the beginning of his career (and still does, if you’ve got a lot of over-opinionated friends on Twitter like I do), I remembered a satirical article about him I had read just a few weeks ago that sparked a lot of rumor among the online raver community. The article, posted on the comedic music news website Wunderground, inadvertently caused many fans to believe their fake interview, where Aoki admits to not actually being a producer was, in fact, true. I thought the article was hilarious, but I was curious if he had seen it and what he thought about it. “When I first saw it [the article] I laughed because I thought it was so funny and so obviously not true that I didn’t think anything of it. But when people were actually starting to believe it, it sucked because it was confusing my fans. The site also says that Diplo is quitting music to become a scientologist, so there’s that,” he says. “I wrote a statement about it on my website. I felt like I needed to for all of the fans that believed it. The thing with satire and parody is that you can quote people and say whatever the fuck you want, and there will be some people that will believe it.”

If you’re not familiar with the other work Aoki does, he also started and runs a record label by the name of Dim Mak. (You may have seen the shirts in Forever 21, perhaps?) Similar to his personal music career, Dim Mak began on an extremely small scale and incubated over the course of nearly 18 years into what is now: one of the most well-known artist-made record labels in the world. “I didn’t know what I was doing when I started a label in ’96 with literally $300. Seventeen or so years later, we have over 20 employees, but it started from no investment or marketing plan. It started from nothing,” he says. “My primary function is finding artists for the label. I’m always looking for people that are changing the game in their own way and making something fresh and new. Doing a record with Iggy Azalea was great. It was cool to work with her before she blew up, and watching her blow up now is fucking awesome.”

So what is Aoki up to now? He’s about to kick off a new tour. “I’m really excited about this tour that I’m embarking on with Waka Flocka Flame, Borgore and Pharell Williams. I’ve been playing a lot of new records [in shows] that I’ve made that are seeing the light of day. ‘A Light that Never Comes’ is my new record with Linkin Park that just started getting service on the radio. My new song called ‘Bring You To Life (Transcend)’ comes out October 15. ‘Steve French’ is actually another new one that I wrote with Flux Pavilion. It’s coming out sometime this month and is another great club record,” says Aoki. As far as details on his Aokify America tour, he was more than excited to share what’s in store. “I wanted to do a crazy tour. Last year I did Deadmeat with Datsik and earlier this year I did a tour with Kendrick Lamar. It was an incredible sight to see two different types of people coming together [regarding the crowd they drew]. With this one I wanted to do something similar and not just do a full-blown EDM show. I wanted to bring in bass culture [with Borgore] and hip hop culture [with Waka Flocka], and Pharell just kind of tops it all off. The best crowd in the world, though, is an EDM crowd, in my opinion, because they just give pure love,” Aoki says of what inspired him to work with such an eclectic group of artists on the new tour.

If you haven’t seen Aoki live already, but you are a fan, you’ve probably heard that he’s become infamous for throwing cakes at the crowd and pulling other ridiculous stunts to provoke the audience into an uproar. Personally, I don’t think that I would have an interest in getting cake thrown at my face (even if it’s for the brownie points people seem to get from their friends when they can truthfully say something along the lines of “Dude … Steve Aoki threw a cake at my face during his show once.”). However, I was curious how exactly he came up with something so random. “The whole idea is about interacting with the crowd and engaging people into making something special. All of these ideas are just a trial by error sort of thing. With the caking, I just kind of woke up with the idea from a music video I had watched the night before. It was a music video by Autoerotique called ‘Turn Up The Volume’ where these cakes explode into people’s faces in slow motion. It was beautifully cinematic and I just thought I could cake people while I played that song. This was back in 2011,” he says. “I just constantly want to evolve the show. For the Aokify America Tour, I’m bringing out what I call ‘Neon Future Technology,’ which is this sort of tech gear I wear on my head and hands. If you check out my Instagram there are some pictures of it.”

Although Aoki does a lot of collaborative work with new and already popular artists, he also has a new full-length album out next year. “The new album is called Neon Future and I’ll be playing a few records from the album in my set at the Aokify America Tour. There are collaborations from Snoop Dogg, to Will.I.Am, to Machine Gun Kelly. I’m also working in the studio with Mac Miller and we’ll see how that goes,” says Aoki.

Who exactly does Aoki listen to when he gets a free minute? Does he twerk (can you even imagine?) to the new Major Lazer album the way I do? Or is he secretly a metal head? I was actually surprised by his answer: “The list is too long. I love all kinds of artists from every genre. Imagine Dragons, I’ve been playing their album. Dan [of Imagine Dragons] has become a friend of mine and Ryan Walker who is a guitarist in the band is a very good friend, so I have lots of love for those guys. Empire of the Sun is incredible. New Ivory, this band from England, is awesome. Their album is one of my favorite albums. I particularly want to mention them because I think their album is one of the best albums,” he says.

So there you have it: the full scoop on what Steve Aoki is up to and how he came to be who he is today—the dude with the sick ‘stache. If you don’t have the money to blow on travel and ticket expenses for his major shows at Tomorrowland or Ultra Music Festival, you can catch his stop in Salt Lake during the Aokify America Tour this Nov. 13 at The Complex (I’ll be there, avoiding the cake). In the meantime, watch out for his new music or even just check out his Tomorrowland set on YouTube where he killed the main stage in front of thousands of people from around the world.