The Growlers, based out of Costa Mesa, play spooky, slowed-down surf pop. It’s an unexpectedly morose sound, considering their proximity to the beach, great surfing and ample sunshine. This spring sees the band touring through Salt Lake City on March 8, playing Austin’s SXSW, the sold out, two-weekend-long Coachella, and releasing their third album, Hung at Heart. 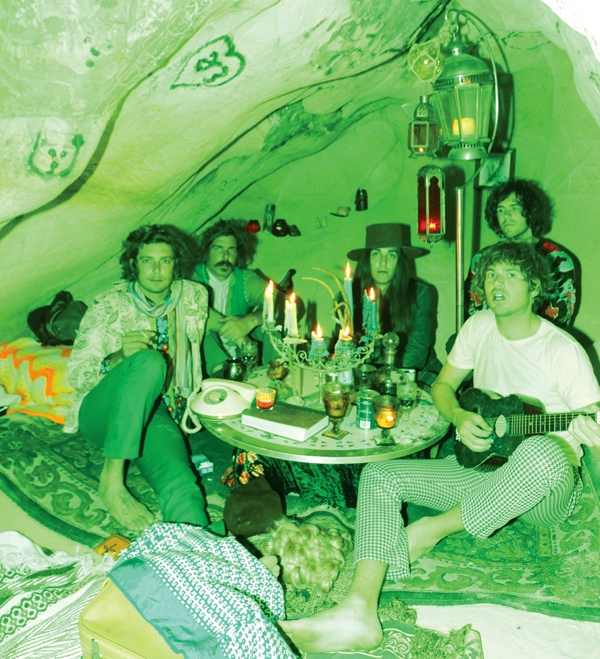 The Growlers, based out of Costa Mesa, play spooky, slowed-down surf pop. It’s an unexpectedly morose sound, considering their proximity to the beach, great surfing and ample sunshine. On their last two albums, Hot Tropics and Are You In or Out?, salty lyrics about death often complement the eerie music. They are simultaneously light-hearted and sinister—imagine the Beach Boys on a combination of morphine and mescaline. Live, the group becomes more of a mind fuck. Lead singer Brooks Nielsen croons to the crowd like a lounge singer who might be stuck in the Black Lodge of David Lynch’s Twin Peaks. The Growlers are dark, moody and sexy. This spring sees the band touring through Salt Lake City on March 8, playing Austin’s SXSW, the sold out, two-weekend-long Coachella, and releasing their third album, Hung at Heart.

Although themes of death crept through their first two albums, the same won’t be the case for Hung at Heart, according to Nielsen. “[For] this one, we went away from that death. There is a lot of everything, but definitely more happy songs and love songs.” The change of mood isn’t the only thing different about their upcoming third album. While The Growlers have traditionally self-recorded in a studio in Costa Mesa, for this album they relocated to record in Dan Auerbach’s (of The Black Keys) Nashville studio.  “We played a show with him and he hit us up and told us to check out his studio when we were in Nashville,” says Nielsen. “As soon as my guys saw it, and started playing with all his toys, it was like ‘we gotta record here.’” Although Nielsen admits he isn’t much of a gear-head, he acknowledges Auerbach has some great vintage equipment, but more importantly, his equipment is quality, and because of this, the recording process was quicker and smoother than it has been in the past.

“When we [record], it’s low budget machines that are always breaking because our stuff is so ghetto. [Then it’s] us having to fix it, sell it and then buy new [equipment]. It takes a long while just waiting for everything to work,” says Nielsen. The Growlers recorded 19 songs in 10 days and Nielsen says they plan to cut the final number down to 13 and hope to release the album in April.

Nielsen says it’s undeniable that their new recording location had some effect on the album’s sound. Although The Growlers have always had a twangy, country influence, being in Nashville allowed those sounds to bleed into the music more often. “Every single bit of Nashville is soaked in country music history. From the gas station bathroom to any street, anywhere you go you see it,” he says. “[There are] definitely more songs about lovers, and [some of] the same old salty lyrics, [but over] nice country songs.”

In addition to an increase in country-influenced songs, Nielsen notes that they tried a lot of things in-studio that they’d never attempted before. “There are some songs on there that are kind of ‘70s funky hip hop sounding,” he says. The variety has made it somewhat difficult for Nielsen to tell what will make the final cut—he says his favorite tracks change every time he listens to the recordings, but the “slower, pretty country songs” do stand out. Although the album won’t be ready until April or May, Nielsen says they still plan to play some of the new tracks when they come through Salt Lake on March 8. “I don’t see any point in stashing them. We are just going to be continually writing songs and making records,” he says.

In addition to new songs, the band will be performing with a slightly different line up on this tour. They’ve moved their former bass player, Scott Montoya, to the drums and recruited Patrick Palomo to play bass. “Any little change you make, it’s pretty difficult, a lot of emotions going on,” says Nielsen. “Especially changing a drummer. [It’s] a big surgery—a heart transplant—but we’ve adapted, and it just brings new life.”
While music fans across the country are waiting with bated breath for the sold-out Coachella shows, Nielsen’s excitement level about the festival is subdued. “I’ve been there before. It’s really hot,” he says. “We are definitely excited, because everyone around us seems to be really pumped. There is a lot of good energy coming from it.” Nielsen admitted that at the time of our interview he wasn’t really sure who else was playing, aside from the headliners. “I’ve heard about Snoop Dogg and Dr. Dre, but I couldn’t give a shit about that. I heard Black Keys are playing, that’d be cool to maybe see Dan.”

Being booked for Coachella isn’t the only thing Nielsen is modest about—while recording with Auerbach and playing the massive Indio music fest may serve as belt notches of success for others, Nielsen doesn’t see it that way. “If I quit right now I wouldn’t feel like I accomplished very much. Those things are more on other people’s lists of what is considered success,” he says. “I’m just recording, I’m just a nice guy playing in a festival that is selling things.”

Check out The Growlers on March 8 at Urban Lounge with the ALLAH-LAS and Spell Talk.