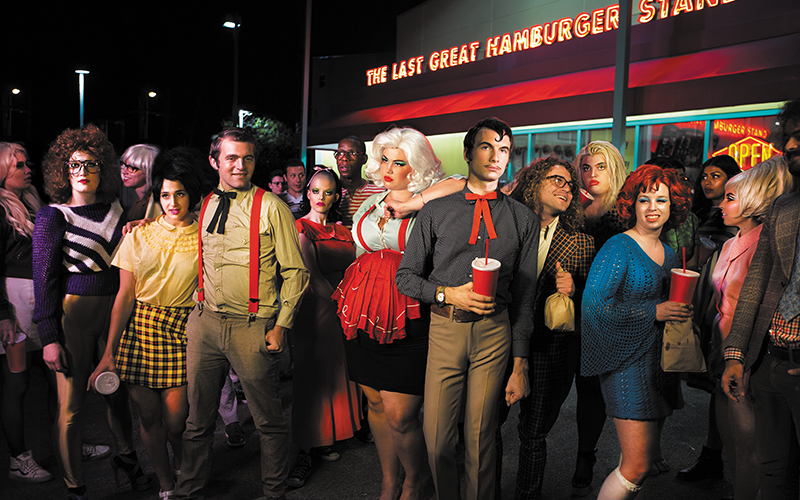 On March 30, the Oakland rock n’ roll trio Shannon and the Clams are going to rip through Salt Lake City by taking over the Urban Lounge with Gazebos and local garage-punkers Breakers. If curious fans are feeling impatient for a taste of the raw rock n’ roll sound that defines Shannon and the Clams, they can get a preview of what is sure to be a brilliant show by dropping the needle on the trio’s new record, Gone by the Dawn. It’s a perfect album that narrates the longing of heartache while still being something one can groove to.

The end of lead singer and bassist Shannon Shaw’s long-term relationship, as well as Shannon and the Clams’ significant step in broadening their musical ability, heavily influenced the new album. During the writing process, Shaw spent time alone in her practice room or driving around to inspire ideas for the new album. “I’m the most creative when I’m feeling tortured,” says Shaw. “I’m the chariot, and my feelings are the horses … I get dragged around by them and they kind of lead the way.” The emotions that she invokes can be especially heard in the track “Point of Being Right.” Regarding the track, Shaw says, “It’s a pretty literal recanting of my relationship with that person of five years who lived at Telegraph Beach. I mean, it really is about having these extreme feelings and knowing something was up and not calling it right then.” Initially, Shaw had some concern for the popularity of “Point of Being Right” due to its painful honesty about the conclusion of her relationship. Over time, though, Shaw has begun to ease into performing the hit single of the album. Other tracks that are telling of this stressful time are “Baby Blue” and “How Long.”

The process for recording Gone by the Dawn was also the first time that Shannon and the Clams had access to a studio. They recorded the album at Tiny Telephone in San Francisco with the help of Sonny Smith of Sonny and the Sunsets. “It’s the first time we got to record at a studio, and Tiny Telephone is a really unique place,” says Shaw. “Really odd, amazing characters run it, and they are so smart and have a huge collection of gear, like lots of bizarre vintage, foreign instruments, pedals, microphones, cables—all kinds of stuff.” Shaw also notes their impressive collection of 20 basses and diverse drum sets. Much to their delight, the band was able to experiment with the wide array of equipment. “We just tried out every kind of keyboard and organ and synthesizer that they had and tried a ton of different sounds,” says Shaw. “We got a lot of freedom to mess with vocals and do things we never did before.” Unlike prior experiences, in which Shannon and the Clams’ creativity was restricted due to limited resources, the only thing restricting them at Tiny Telephone was the time they had allotted at the studio.

Hitting the road, Shannon and the Clams have enjoyed the surprise success of Gone by the Dawn and have found that many of their shows have been selling out. “Everything has been good!” says Shaw. “I don’t even know how. I really expected a backlash.” Despite Shaw’s enthusiasm for being able to record at Tiny Telephone, she was not entirely happy with the cleaner sound that came from the studio. “It was really scary, singing songs that were so straightforward,” she says. “That was really hard for me. I really expected people to reject it and not like how the sound was cleaner.” In contrast to the new album, Shannon and the Clams’ former records have a noticeably rawer sound, and that is partly due to how the other albums have been recorded. For example, I Wanna Go Home was recorded at the infamous punk/garage house, Telegraph Beach. “I like things to sound homemade, handmade, fucked up, imperfect,” says Shaw. “I think that the sound engineers really tried to meet me halfway, and that came across really well.” So far, Shaw has only come across reviews praising Gone by the Dawn. While it has elements that profess the exciting and wild aspects of weirdo rock n’ roll, it also maintains the roots of their signature rambunctious style.

Unfortunately, Shannon and the Clams have experienced a disappointing loss at home. Telegraph Beach was recently shut down, and its closure has been a blow to Oakland’s creative community. Shaw suggests that the closure is partially due to an increasing trend of evaporating affordable housing that is making it difficult for bands to find places to play DIY shows. Shaw says, “People are trying to make cool bar scenes happen here, but it’s just hard with the music community I’m a part of to really let loose and love being in a place where you have to pay to get in and pay for drinks … [and] be out by 2. It’s hindering people a bit.”

Not to be deterred, Shannon and the Clams continue onward and upward with a string of U.S dates in March that sees them roaring through Salt Lake City. When asked about what Salt Lake fans can expect, Shaw says, “We are performers. We’re not just a rock band that gets up and rocks. We’re living each song as we’re playing it—reliving it.”