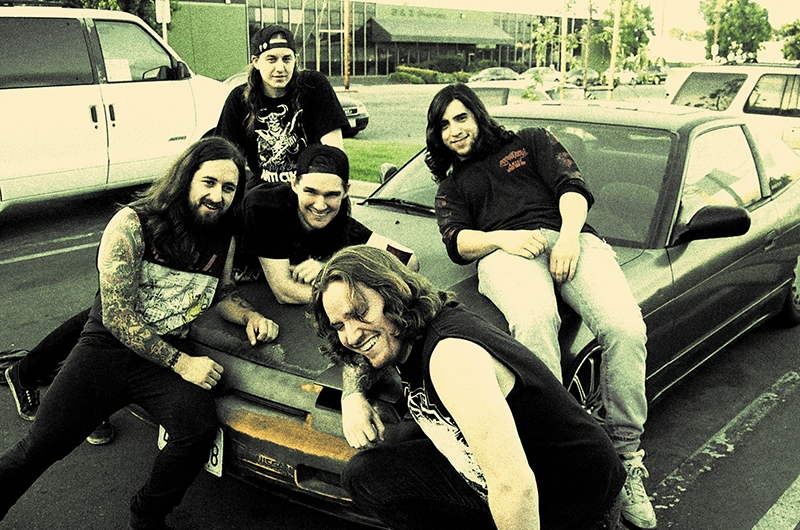 It was an interview that almost didn’t happen. After not one, but two failed attempts at speaking with Power Trip frontman Riley Gale, it seemed that this piece wasn’t to be. Fortunately, a third go found SLUG and Gale on the phone discussing everything from the awesome, “WTF” lineup of Power Trip’s upcoming tour and new material to graphic novels and the militarization of police. SLUG caught up with Gale about their upcoming tour and future plans.

Power Trip turned heads in 2013 with their full-length debut, Manifest Decimation. Even though crossover thrash is well-worn territory, Power Trip have the secret sauce. It might be their background in the DIY hardcore scene, the reverb on the vocals and drums, their impeccable riffing or their detonating live show—regardless, they have it. If you’re going to see them play, come prepared to be stage-dived upon—a lot. Conversing with Gale is smooth. He’s laid back and thoughtful in his responses, lacking the pretension you might expect from someone who often mentions Michel Foucault in interviews. It’s not all that surprising if you’ve ever seen Power Trip live. They may tackle important topics, but first and foremost, they are there to blast riffs and have fun.

Gale and the rest of Power Trip are about to head out on tour with Title Fight and Merchandise, which is such an eclectic and bonkers lineup that it would be criminal not to catch it. As Gale says, “We’ve talked about doing stuff like this in the past, and it’s kinda been like ‘too weird, too weird.’ Now we’re just kind of like, ‘Fuck it—let’s do it.’” That’s as sound of a sales pitch for a tour package as any. Power Trip are the common link between Title Fight and Merchandise, having known both bands for a few years now. Gale is more excited than anything to just “hang out with those dudes” and is pretty sure that anyone who digs the spectrum of genres represented on the tour “has good taste in music.” Indeed.

Not only is the lineup stacked, but this will be Power Trip’s first time bringing their always amped crossover to Salt Lake City. When asked about expectations of their introduction to Salt Lake, Gale says, “We just go out and just play. We don’t expect anything, and that’s what makes good shows even better.” He promises, “I try to give people what I would want a good band to give back to me.”

The lineup on this tour will feature Power Trip’s prolific drummer Chris Ulsh (Mammoth Grinder, Hatred Surge) assuming guitar duties—nay, “riff stick” duties, as Gale likes to say—in Blake Ibanez’s stead, since Ibanez will be in school. Gale’s pumped about the lineup, as they have toured with this lineup before with Eyehategod, and says that Ulsh brings his own style to the guitar.

Prior to embarking, Power Trip are regrouping in Dallas (Gale lives in Chicago now) to write new material for their next album. They’re in preliminary stages, and when asked about what the new songs will sound like, Gale says, “We haven’t really talked about it. To be honest, we’ve kinda flexed some riffs and thrown them around in some jam sessions. We’ve got a lot of cool ideas left from the first LP that we have to flesh out.” Gale also mentioned Ulsh again, says, “Ulsh is going to be writing quite a few more riffs—he wrote most of “Crossbreaker,” and that song turned out really well. That dude rocks a riff stick.” Because the songwriting is in such an early state, Gale said that they probably wouldn’t be playing anything brand new on the upcoming tour.

As we began to talk about what inspires Gale’s indirect but political lyrics, conversation turned to the seemingly endless ills of the world. Although Gale finds plenty to be angry and negative about, he said the police top his list, saying, “I guess the police always piss me off. Same with government and politicians and all of that … Anybody who’s corrupt and pretends they’re not. I have way more respect for someone who will stab you in the front than stab you in the back.”

The conversation inevitably made its way to the recent explosion of protests against police in the wake of the Michael Brown and Eric Garner decisions, and Gale talked about what compelled Power Trip to take to Twitter to discuss the topic. “I was so beside myself,” says Gale: “‘Damn, I should say something about this.’ I guess that’s one of the bigger outlets for people to listen to my bullshit. I felt like it was such an important thing that people overlook. It’s still frustrating. It’s still frustrating as hell. It’s just frustrating that only now people are starting to see it.”

Not everything is so intense with Gale—we ended the interview swapping notes on our current graphic novel reads, with Gale being particularly enamored with the Dungeon Quest series and early Grant Morrison. We both came away with plenty to look into. So, if you see Gale at their show with Title Fight, Merchandise and locals Sights on March 10, you may be able to talk some world events or catch up on your favorite graphic novel reads.