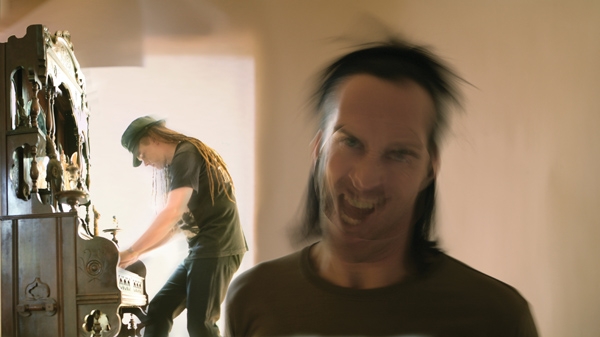 On the proverbial eve of Skinny Puppy’s third show in Salt Lake City since officially reforming in 2003, vocalist and mad showman Nivek Ogre (aka Kevin Ogilvie) seems to be in a fine mood…despite my interrupting a Skinny Puppy rehearsal and the fact that their current label, SPV, has filed for insolvency, essentially putting the status of the newest Skinny Puppy album in limbo. “We’re going to be doing some interesting self-promotion and hijinks over the next few days leading up to the kickoff of the tour,” says Ogre. “Basically, what happened is that we planned the tour to coincide with the release of our third record for SPV, and a couple of months before the tour was scheduled to begin, SPV went into insolvency.” Essentially, after working on and all but completing a completely structured album of all-new material, SPV buried it.

“Once the trouble with SPV happened, we got kind of spooked,” says Ogre. “We had the album almost completed, but we didn’t want to deliver it not knowing if, or when, it would ever see the light of day.” Because of this, the band came up with a few different ideas, one of which was releasing an album of music commenting on the economy that would be what amounted to a “throwaway record,” simply to fulfill the band’s contractual obligations to SPV. However, plans changed when the band realized that if SPV actually was purchased by Sony, and someone at Sony happened to be a Skinny Puppy fan, more trouble may be caused by turning in an album that wasn’t up to snuff for the band. Instead, the band started writing more music, which ended up sounding closer to Ogre’s solo project, ohGr, than Skinny Puppy. “cEvin [Key] heard the stuff I had been working on, and couldn’t really get behind any of it as Skinny Puppy material,” says Ogre. “The songs were a bit too structured and a bit too different for us to consider releasing under the Skinny Puppy moniker.” The bottom line is that the band wants to hold on to any new music until their label problems are completely resolved.

“We’re going to kind of keep the songs we perform a bit more on the retrospective side, but we don’t want to do the same things we did on the Greater Wrong of the Right tour again,” he says. “Some of the theatrics on that tour were a bit extreme and actually ended up costing us sponsorships and caused mild protests from right-wing sympathizers.” This isn’t too hard to understand, considering the fact that Ogre’s character on that tour was beheaded by two terrorists, who, once their black-wrapped masks were removed, were revealed to be George W. Bush and Dick Cheney.

Skinny Puppy, as a band, adheres to a the punk-rock ethic of using their music not only as entertainment, but as a method of expressing their opinions and attempting to introduce people to new schools of thought. “There’s obviously something shocking about our music and our performance,” says Ogre, “but we’ve been very fortunate to be able to use that shock to speak to people about different issues we feel passionately about. It’s a great gift, and a great weapon.” Scanning Skinny Puppy’s three-decade-long catalog, it’s easy to see what Ogre’s talking about. From early recordings about animal abuse to the band’s extremely graphic anti-animal testing opus VIVIsectVI, and up through the very political Greater Wrong of the Right release, the band has never shied away from controversy.  “The new generation of fans that picked up on us when we released The Greater Wrong of the Right just goes to show that people are interested in, and hungry for, music that pushes them to think,” says Ogre. “The other cool thing is that, at least in Europe, we have cross-generational fans, but here in North America, we end up playing smaller shows to smaller audiences, but the reactions we receive are incredible.”

Ogre is relishing his relatively unknown, anti-celebrity status here in Utah. He may be able to get away with being just another face around town before Skinny Puppy’s performance at Club Vegas on November 6th, but once he takes the stage, all eyes will be on one of the few mad geniuses the punk, industrial and goth scenes have ever known.