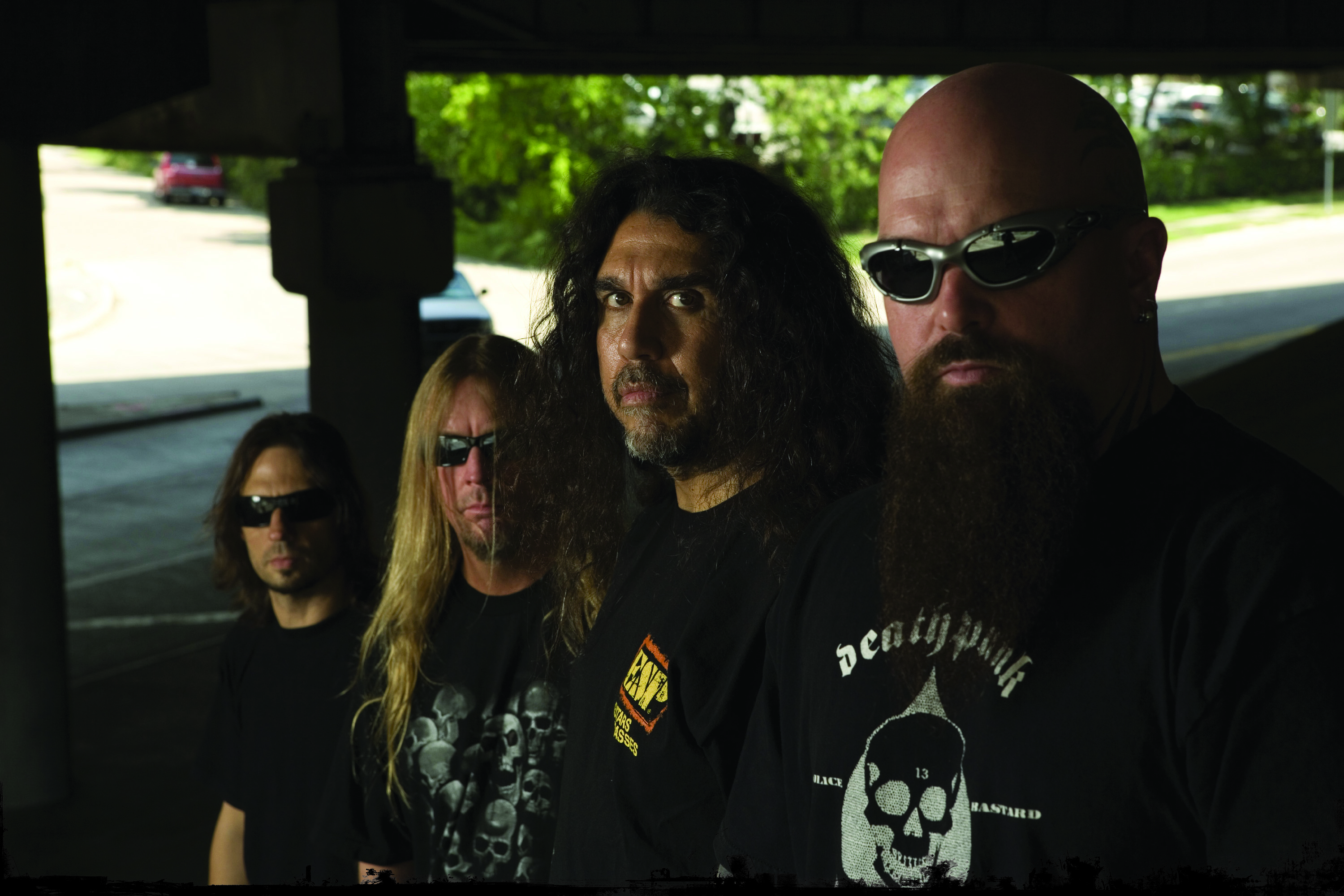 Usually, if Slayer makes it into the mainstream media, it’s because somebody’s killed themselves and their parents are suing or right-wing Christian groups are complaining about their album covers. Lately, though, Slayer has been getting some positive attention for their criticism of the war in Iraq. They’ve even received their second Grammy nomination for the song, “Eyes of the Insane.” I sat down for a pleasant phone conversation with possibly the most intimidating member of the band, Kerry King.

SLUG: It was announced just yesterday that Slayer was nominated for the second time for a Grammy, this time for “Eyes of the Insane.”

SLUG: Did you guys ever expect that kind of attention going into this?

K.K.: I think we won’t win. No, I mean, when we got nominated for the first time, it was for “Disciple,” and I’m like, “Have you guys ever listened to Disciple”? It blew me away. You know? How the hell can you guys nominate Disciple”? It’s one of the most hardcore, evil tunes we ever put out and it’s up for a Grammy? I think the whole process with the Grammy’s is pretty ridiculous. I think most people voting or nominating don’t have any idea what they’re doing. Case in point; the first metal [nominations] were a few years ago, when Jethro Tull won it over Metallica! I mean, how did that happen? Whatever you think of Metallica these days or not, that was the biggest injustice I’ve ever seen.

SLUG: With your latest album, Christ Illusion, focusing on anti-war themes, do you still use the Holocaust footage for shock value, or has the point of it changed?

K.K.: I think when we do war stuff, it’s more like when Jeff [Hanneman] did “Angel of Death” awhile back and on Divine, he did “SS3.” He’s just into WW II. He’s into the strategies of war and shit like that. That’s where his input comes from on those two songs. I get my ideas from other areas, Tom [Araya] gets his ideas from serial killers and stuff like that. We all blend and get into each other’s world a little bit. That’s where all the war stuff comes from.

SLUG: I was reading that a large majority of your fan base is actually in the military, and you went and greeted some troops at a base in Germany?

K.K.: Yeah, it was cool. We went and did a little, well, not an in-store, but signed autographs, hung out for a couple hours. A bunch of the enlisted people that didn’t have to work that evening came down to the show and they got … well, we got them obliterated! [Laughs]. You know, hangin’ out with the American boys, havin’ a good time. It sucks to be down there doing what they’re doing, so if I can, [I want to] take one day out of their lives and make them forget about their shitty fuckin’ [exsistence] in the military. They had a blast. We’ve got pictures of some of those guys because we were hanging out afterwards and there was this one dude that took us around and we got to sit in the cockpit of an A10. That was awesome! He came that night, and I’m like “Dude, you’re drunk!” and he’s like, “Nah, I’m not drunk,” and I just met him that day, you know, I don’t know this guy. He said, “I’m not drunk,” and I said, “You are fuckin’ drunk,” and I took my camera out of my pocket and I took his picture, and I said, “Here, that’s a drunk motherfucker!” So it’s cool to be able to, you know, just have fun with ’em. That’s probably shit they’d do at home and they don’t have the opportunity to do that.

SLUG: Have you ever heard any negative feedback from soldiers for speaking out against the war?

K.K.: No. You know, they’re in the act of war; we write about it. So hopefully I can help them get through some of the shit they’ve gotta deal with; give them a release; not have them go off the deep end and start randomly killing people. That’s not what it’s about. Just to help them get through their day, that’d be cool with me.

SLUG: There have been multiple photos of you and Tom wearing Heavy Metal Shop shirts. Do you have a relationship with the Metal Shop? Do you know Kevin [Kirk] personally?

K.K.: I haven’t been in there for quite awhile, so that’s probably why you haven’t seen me wearing the shirt for a while. I probably wore it out. Anytime we go through Salt Lake and we’ve got some time to go do anything, we’ll do stuff like that.

SLUG: So, you guys tour pretty consistently with hardcore bands or bands associated with the hardcore scene. You’ve obviously been a huge influence on hardcore and metalcore. Is there any significant influence these bands have had on you, either musically or ideologically?

K.K.: I think it’s just a derivative of what we’ve done over the years, and they’ve taken hardcore to that level. To me it’s a little bit remedial of what we’re doing, so if I let that influence me, I’d kinda be going backwards.

After I hung up, I breathed a heavy sigh of relief because I had not had the skin removed from my face through the phone. I had half-expected that to happen. I was quite surprised at how friendly and caring Kerry King seemed, despite being the guitarist for the most notoriously evil thrash-metal band in the existence. It seems to me it won’t be long before households around the world will echo with, “Why can’t you be more like Kerry? Now go to your room and listen to Slayer!” Slayer will be playing at Saltair on Jan 30. It’s a show that can’t be missed.